Sheet cred – the bliss of bedlinen

Why good bedding is the best comfort of all

Where are you right now? I’m lying on my bed. My feet are tucked under white cotton percale sheets from The White Company. The linen is finished with a pretty midnight-blue trim. They aren’t the most expensive sheets in the world – but they give me great pleasure.

The bed has always been my refuge from the world. I grew up in an eccentric London household where my parents spent an inordinate amount of time lying atop theirs – a vast, custom-made monolith on which all three of us children could also fit comfortably, furnished with deep-fitted side tables and multiple drawers. Each parent had a bell on the wall beside them. One ring meant we were to bring them tea; two, that they wanted a snack – a Welsh rarebit or maybe some slices of pickled cucumber; three rings meant get in here now. As I left for school each day, I would see my mother rolling her morning calls propped up on six large pillows, not including her neck pillow, which resembled a fat dog bone. When I returned, she would still be pretty well in the same position, only by this time she was dressed.

I loved that bed. The chaos of the outside world was calmed by its cool, crisp order. My parents’ sheets were simultaneously soft and firm, warm and cool, with a light blanket on top covered by a gossamer-thin embroidered linen sheet. My father taught me how to do hospital corners – although he always kicked his feet out so that they were “free to breathe”.

Snobberies are inflamed by talk of thread counts

Even as a 10-year-old I recognised the wild glamour of fancy linen. My parents, returning from European holidays with sheets and tablecloths my mother had “ordered in Venice”. In my mind, good sheets have always been the apex of luxury. But which are best? There are many different views. Anne Singer is the Paris-born doyenne of the linen world and founder of The Monogrammed Linen Shop. For 35 years she sold high-quality linen to London’s smart set – including, it transpires, my mother – before launching her eponymous line in 2019. But even she is reluctant to advise: linen preference, like wine, is a highly personal thing. “You really have to touch the cotton, feel it between your fingers to experience the quality that comes from the cotton fibres,” she says from the basement of interior designer Tomasz Starzewski’s Ebury Street boutique, where she keeps her bespoke samples.

She will say, however, that “the best weavers are in Italy, followed by France, Belgium and Portugal. And the best-quality cotton is grown in Egypt. It produces fibres that are smaller in diameter, longer in length and much stronger than other types of cotton. This strong, fine yarn allows the weave more threads per square inch – and the higher the thread count, the tighter the weave.”

Snobberies are inflamed by talk of thread counts. But Singer gives them all short shrift. “One should not go much below a thread count of 300,” she reasons. “And there is no need to go above 500.”

“Thread count creates a feel,” says Angela Wickstead – mother of the fashion designer Emilia – who launched her bespoke linen company in 2017. Her first trunk show, at London’s Chiltern Street Firehouse, quickly established her as the official bedmaker of the fashion crowd: Ruth Chapman, Eugenie Niarchos and Elizabeth Saltzman are all fans. Her bedlinen includes a main collection of around 20 design styles that can be personalised and (in ordinary circumstances) are delivered in 12 weeks. Wickstead, whose mother is Italian, was brought up in New Zealand, where polycotton sheets were the norm. She found her calling while visiting Italy when her own daughter was a child. “I used to visit my cousins in the village of Barberino di Mugello outside Florence when Emilia was a little girl,” she says. “Mothers and grandmothers would sit in a circle outside in the square embroidering the azure trims on sheets for their daughters’ wedding trousseaus.”

Far from offering pristine white bedding, though, Wickstead’s take is more eclectic: “When I do a bed set, I like to try to sell different sets. I encourage people to mix up my designs, so the bed has more texture and fun.”

And then there is the finish. While percale is a warp-weft weave, which is very tight and feels smooth and crispy with a slightly colder feel, a sateen is more tightly woven so it has a polished edge. It’s not as dense and has more stretch and sheen to it – and the greater the thread count, the silkier it seems.

But, ultimately, you are either a softie or a crispy person. I really like the look of the soft, washed, crumpled linens that Caravane is so famous for producing, but I’m a crispy girl.

Arguably, there is nothing cooler nor crisper than the 1,300-count pure Irish linen available from the royal supplier Givans, which offers an embroidery service that includes every coronet in the land. But nothing crumples as fast as linen, and in the absence of having someone coming in to iron it every day, I abstain.

A more modern alternative, perhaps, is Tekla, the Copenhagen-based interiors company founded in 2017 by Charlie Hedin, who used to work at Acne. In response to the dwindling patience for ironing, Tekla developed a percale weave with a stonewash finish that reflects how people sleep – and how much time they spend in bed.

“Everything seemed made for a house that had an iron in the basement, but the modern person doesn’t do that,” he says of the collection. “I wanted to find a quality that was easy to wash and tumble-dry or hang. It took almost two years to come up with something that was crisp and fresh but still had that same soft-to-hand feel.” Tekla doesn’t use any plastic in its supply chain, its sturdy boxes are made from recycled paper, the cotton is organic and all the dyes – colours so pretty that even I was seduced into sleeping in the pale sky-blue – are harmful-chemical free.

Now, more than ever, the bed is my sanctuary. I Skype here. I type here. I organise my life here. It’s where I feel most connected to my late parents and my childhood home. Sadly, I don’t have their food bells. Nor the facility to order tea on command. But my sheets are still a cherished luxury. And, most importantly, in these scary, anxious times, they help to send me sound asleep.

How To Wash It, by Anne Singer 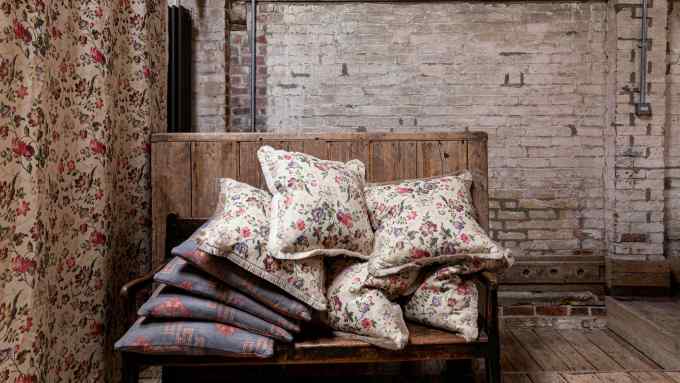