Justin Trudeau went to US president Joe Biden’s climate summit in April armed with ambitious targets. Canada’s prime minister planned to cut emissions by as much as 45 per cent from their 2005 levels, by the year 2030. Yet despite his rhetoric, the country still has a high-carbon economy.

Over the past two decades, tens of billions of dollars have been invested in the country’s oil sands — a vast deposit of extra-heavy crude in Alberta. This has propelled Canada into the upper echelon of global producers and driven economic growth, accounting for about 10 per cent of gross domestic product.

And the government’s pledge to slash emissions does not appear to be a barrier to decades of further oil growth. Even in a scenario where global climate actions continue to accelerate, the government expects Canada to pump nearly 6m barrels a day of crude by the mid-2030s, up from today’s 5m b/d output, according to the Canada Energy Regulator.

Environmental groups, which have long campaigned against the oil sands industry, have excoriated the Trudeau government’s oil growth target, saying it undermines the climate agenda. 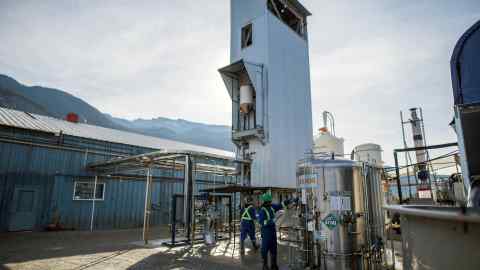 Under pressure from both investors and the government, the oil industry recognises that cutting emissions is critical to its future. “If we want the oil sands to be able to continue to grow production, we need to get emissions down,” said Sonya Savage, Alberta’s energy minister, a strong backer of the oil sector and critic of Trudeau’s climate policies, at a conference in April.

Andrew Leach, an associate professor at the University of Alberta, says the industry has made progress on emissions, but those improvements have come from the most carbon-intensive projects — and the industry as a whole remains a laggard. “We’re going to have to do a lot just to get to a not fantastic place in the global hierarchy,” he notes.

International investors have pulled back from oil sands over environmental concerns.

More than 50 banks and financial institutions — including UBS, Deutsche Bank and HSBC — have pledged not to finance new oil sands projects, according to the Institute for Energy Economics and Financial Analysis, an Ohio think-tank.

Oil companies have also pulled the plug. Last year, French oil major Total wrote off $7bn in oil sands assets amid a push to green its business. That followed an exodus in 2017 that saw Royal Dutch Shell, ConocoPhillips and Norway’s Equinor sell off their oil sands assets.

The environmental backlash has also made it difficult to build new pipelines seen as critical to continued expansion. 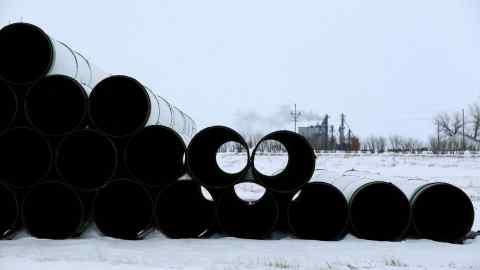 President Biden cancelled the Keystone XL pipeline, which would have opened an artery for 830,000 b/d of heavy crude to move from Alberta to the US Gulf Coast, on his first day in office — touting it as part of his response to the “climate crisis”.

For now, officials in Alberta are optimistic that other pipeline projects, alongside the capacity to send oil on railcars into the US, are lined up to facilitate growth for the next few years.

These include completing the expansion of Enbridge’s Line 3 into the US and the Transmountain Express line to Canada’s west coast, which officials say will add a total of nearly 1m b/d of capacity by the end of 2022. However, both projects face opposition from environmentalists and indigenous groups.

“We are in a good place,” insists Savage. “After many years of seeing projects cancelled, and being in a situation where we had to curtail production to be able to ensure we had an appropriate takeaway capacity, I’m optimistic.”

Meanwhile, the Trudeau government is looking to hydrogen as a long-term path to wean itself off oil. In December, it unveiled a plan to foster a world-beating hydrogen industry, which included establishing a C$1.5bn ($1.2bn) fund for start-up projects.

Oil-rich Alberta, which has clashed with Trudeau’s government over climate policy, has backed the plan.

The province has some of the world’s largest natural gas reserves and hopes to set itself up as a producer of blue hydrogen, which when paired with carbon capture technology can produce low-emission hydrogen from natural gas.

“We don’t always see eye-to-eye with the federal government on energy,” says Savage. “But in hydrogen we do.”