Caw blimey! Behind the wheel of a legendary Gullwing

As a rare Mercedes-Benz 300 SL comes up for sale, we take it out for the test drive

The Mercedes-Benz 300 SL or “Gullwing” as it’s affectionately known is one of the most celebrated classic cars in existence. At an auction in May a 300 SLR Coupé — one of two racing models kept by Mercedes-Benz since new and described as the Mona Lisa of cars — sold for $142mn, becoming the most expensive car ever sold. Less rarefied versions will still fetch £1mn.

Despite Mercedes’ southern German origins, the story of how the Gullwing came to be has more to do with Hollywood than Baden-Württemberg. Had it not been for the commercial acumen of an Austrian-born, New York-based importer of luxury European cars during the 1950s, the car might never have existed. With a canny understanding of what would sell in the booming postwar American market, Max Hoffman suggested to the Stuttgart carmaker that it build a toned-down, road-going version of its sleek and streamlined W194 racer. This struck a chord with Mercedes’ management and the board agreed to Hoffman’s order for 1,000 cars. In 1954, the 300 SL took centre stage at the New York International Auto Show.

It was the fastest production car of its day

Based on a tubular spaceframe that weighed just 50kg, the innovative and unconventional design gave rise not only to the SL badge — which stood for “Super-Light” — but also the Gullwing nickname, as the car’s upswinging doors were the only feasible solution to work with the car’s unique design. With a top speed of 155mph and, for the first time in a car, direct fuel injection, the Gullwing collected the coveted accolade of the fastest production car of its day. A total of 1,400 300 SL models were produced with around 80 per cent of those reportedly sold to the US alone. Since then, the iconic Gullwing has found its way into the hands of Juan Manuel Fangio, Pablo Picasso, Sophia Loren, Clark Gable, Frank Lloyd Wright, Ralph Lauren and former F1 boss Bernie Ecclestone to name a few.

Like so many of its siblings, the 300 SL I am getting to take for a spin, finished in Fire Engine Red, ended up in the US having been imported in May 1956 before making its way to its first owner, Dr Moffett of Denver, Colorado, who kept the car until 1972. The car came to the UK in 1989 when it was acquired by an English collector. Now in the hands of luxury car specialists Hilton & Moss in Hertfordshire, it is up for grabs and awaiting full restoration.

Its slender build and dainty details exude elegance, while its strawberry-red dashboard and cream leather interior are enough to charge the spirits of the most reluctant car fan. Surpassing the Italians in the style department, the 300 SL’s design was a wonderful exercise in streamlining and stylistic expression, as well as a form that fitted neatly around innovative engineering. That said, its high, deep sills and unconventional doors mean getting into the Gullwing gracefully is an art that’s exceptionally hard to master. Helping ease the pain of entry — albeit very slightly — is a pivoting steering wheel that clips up into place once you’re sitting down.

Out on the open road the car is every bit as good to drive as it is to look at: the 300 SL’s three-litre, straight-six engine cracks into life after a crisp click of the key in the centre of the dashboard and, moving off, the rasp of the exhaust and the feel of the thin, yacht-like steering wheel and delicate gearstick make you feel as though you are in possession of something very special indeed. As I head through sleepy towns and leafy British B-roads, the Mercedes is a smooth but sprightly tourer. While its performance might not match up to much by today’s standards, its ability to turn up the heat when dropping down a gear, with the theatre of engine noise reverberating around the glass- and leather-lined cabin, is intoxicating. As is the waft of fuel that classic car aficionados will be all too familiar with.

HTSI
How the 968CS rebuilt the Porsche powerhouse 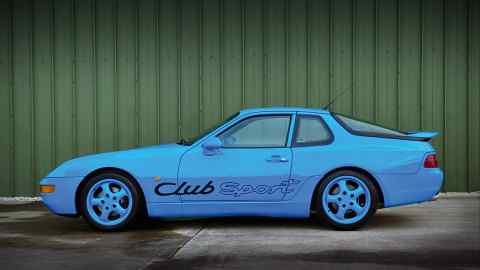 Now in its 66th year, this particular Gullwing is being offered for sale by Hilton & Moss. It comes with a price tag of £1.7mn, which includes a full restoration carried out in the company’s workshop. With the 300 SL fast approaching its 70th anniversary in 2024, the timing of this restoration project could prove to be the perfect celebration of one of the greatest cars of all time.