We’ll send you a myFT Daily Digest email rounding up the latest Robotics news every morning.

At a FedEx Ground site in North Carolina, autonomous carts are used to unload packages from conveyor belts. DHL Supply Chain uses artificial intelligence software to assign robots for specific tasks at its depot in Wisconsin, while logistics company Geodis uses robots to haul goods and minimise human tasks at its plant in Texas.

The adoption of such technologies is expected to grow as the Covid-19 pandemic forces companies to reduce human interaction in the workplace and increase their reliance on automation.

“Coronavirus is likely to accelerate automation,” Carl Benedikt Frey, director of Oxford university’s Future of Work programme, wrote in the FT. “Even after Covid-19 passes, companies will want to pandemic-proof their operations.”

FedEx, DHL and Geodis are all customers of Vecna Robotics, a US technology company whose self-driving pallet trucks automate material handling while its AI platform is used to improve fleet management. As well as lowering labour costs, such technologies reduce companies’ reliance on human-operated machinery.

Such demand was highlighted in ecommerce giant Amazon’s 2020 first quarter sales, which rose almost 30 per cent year-on-year, while its market capitalisation has increased $400bn in the year to date.

At the same time, Amazon warned that keeping workers healthy and products moving could cost an additional $4bn in the following quarter, as the pandemic placed strain on its vast network. The world’s most valuable company uses more than 200,000 robots to move products in its warehouses and is developing drones to be used for delivery.

Siemens uses software that records requests for quotations from shipping companies and forwards them automatically to service providers, even suggesting which should be given the orders. Siemens eventually wants to hand this process over to such bots completely and for them to communicate with the service providers’ bots.

The service industry is also feeling the encroachment of automation, with food production lines adopting robots such as “Flippy” from Miso Robotics. The California-based group’s robot can cook burgers on a grill, monitoring the patties and detecting when the meat needs to be turned. Flippy can be used for tasks involving a deep fat fryer, such as making French fries, and knows when to clean its workspace and spatulas.

The importance of disinfection has also been heightened by the pandemic, with robots now carrying out tasks that normally require significant manpower and that can expose employees to both the coronavirus and to chemical cleaning products.

“We will see autonomous disinfecting robots in all types of buildings because of the pandemic,” says Melonee Wise, founder and chief executive of Fetch Robotics.

California-based Fetch’s autonomous robots are used to decontaminate large facilities, such as stadiums and airports, which can be re-entered two hours after cleaning.

“Robots are used for dull, dirty and dangerous work in general, so disinfection fits right into their wheelhouse,” says Ms Wise, whose company works with more than 100 companies in 22 countries and has raised $94m from venture capital firms including SoftBank Capital. 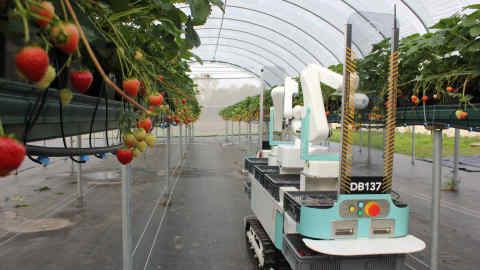 Other innovations include remote collaboration software that enables medical professionals to beam into operating rooms via video link, and the use of robots as assistants in care homes.

However, the increased adoption of automation has raised concerns that jobs for humans will be threatened as workers return from lockdown.

Siemens, FedEx, Vecna and Fetch all agree that robots are there to aid workers rather than replace them. “Robots are great at working, but we need to plan in real time and use humans for problem solving,” says Vecna’s Mr Theobald. “The human element is critical.”

Get alerts on Robotics when a new story is published