How companies draw on science fiction

Volkswagen, Hersheys and Capital One are among the companies hiring futurists

In 1964 Sir Arthur C Clark stood in front of a BBC camera and predicted that by the year 2000 people would be able to communicate instantly with their friends, even when they had no idea where they were. The author of 2001: A Space Odyssey described a world where distance was no obstacle, and business could be conducted as easily from Haiti or Bali as from London.

Yet the man who in effect foresaw Skype and the spread of the internet, also predicted that the “servant problem” afflicting households in the new millennium would be solved by biologically-engineered great apes, tamed and trained to do the chores we humans found distasteful. The only drawback, he suggested, was that eventually these “super chimps” would form trade unions and “we will be right back to where we started”.

Sir Arthur was not bothered about whether his predictions would turn out to be true and, in this respect, the science fiction writer was a true futurist.

“No serious futurist deals in prediction,” wrote Alvin Toffler, futurist and author of the global best seller Future Shock. “These are left for television oracles and newspaper astrologers.”

It is a rule still followed by a new wave of professional futurists who are being hired by companies to imagine the world we will inhabit in 20, 30, even 50 years’ time.

“It is not about predicting things. It is more about thinking about the possibilities and raising the awareness and ability of the company to adapt,” says Josef Hargrave, global foresight manager at engineering consultancy Arup.

It is not about predicting things. It is more about raising awareness

Futurism, long considered the preserve of science fiction writers, eccentrics or charlatans, is becoming mainstream. Universities from Texas to Berlin are teaching future studies and a growing number of companies are building so-called foresight teams to help them prepare — not for the next big thing, but for what might (or might not) come after that.

Companies as diverse as Volkswagen, Hersheys, Capital One bank and even those whose business is the past — such as Ancestry.com — have employed futurists to help them see through the chaos and confusion of a rapidly changing world.

But if a futurist’s job is not to predict the future as it will actually play out, then what is it?

“It is about challenging today’s management,” says Erik Øverland, president of the World Futures Studies Foundation, an organisation that has been looking to the future for more than 40 years. “Big industrial enterprises see we are living in a complex world. You will do much better if you examine different possible futures. What we do is the opposite of prophecy.”

Brian David Johnson, now a visiting lecturer at Arizona State University’s Centre for Science and the Imagination, was employed as a futurist at chipmaker Intel between 2009 and 2016. “When I was appointed at Intel, people thought it was a bit strange,” he recalls.

His job was not to predict which technologies would be adopted by consumers, but to play with different ideas about how and in what context such technology might be used. To do that, he had to speak to sociologists and ethnologists, as well as tech geeks, to understand the social and cultural dynamics that could affect Intel’s long-term future.

Video: How do you predict the future?

“A fundamental component to future casting is first to . . . understand humans. It is always about people,” he says.

Mr Johnson, like many professional futurists, also turns to science fiction writers to help him build possible scenarios. He uses “science fiction based on scientific fact to prototype the future,” he says. These writers “allow you to examine the dark places, the dystopia, and to come up with crazy ideas”.

He works with Cory Doctorow, the Canadian born author of the award-winning Little Brother, a novel about surveillance and civil liberties. Mr Doctorow, who is also an activist for digital rights and freedom says his aim is to imagine “what kind of social and economic milieu might arise as a result of technology”. His latest novel Walkaway describes a world where technology has created the potential for an abundance of goods, but equally enabled an elite to limit access to that abundance. “One of the ways we contest the future is to imagine different futures," he says.

Tim Maughan, author of the science fiction collection Paintwork, is used by Arup’s foresight team, governments and others to explain his vision of future society. “My job as a writer is to encourage critical thought about the future,” he says. “The easiest way to address concerns about the present is to look at them in the future. If I am worried about the impact of Uber on labour practices then the best way [to understand that] is to look at what that would look like in 10-15 years if it was left unregulated and untouched.”

Yet there is more to corporate futurism than science fiction and anthropology.

Futurists from Rand Corporation and Shell in the 1960s and 70s were among the first to apply rigorous methodology to the discipline, measuring expert opinions, environments, and emerging social, economic and political issues. Today there is a set of recognised tools and analytical processes to help corporate futurists prepare a range of possibilities to inform strategists, researchers and management.

“These tools make the reflection on the future more substantial,” says Mr Øverland. “You can be more systematic in your reflections.”

Mr Johnson says today’s futurists are also more applied in their thinking than in the past. Credible futurists recognise that they have to devise scenarios with “actionable steps for [an] organisation to bring about the positive future and avoid the negative one,” he says.

“If companies are not getting value from [futurists] they will not last,” he adds. “This is about business and this is about profit.”

Some companies still remain to be convinced, however, that they need a full-time futurist. Stuart Birrell, chief information officer of Heathrow airport, says he struggles to get past the “so what” of many futurist scenarios. “As we enter this next period, technology is changing the behaviour and expectations of passengers. You may need their input, but you need your own people to help create the vision for the future.” Otherwise, futurism is “like having a strategy with no plan. It is just a nice story.”

Alida Draudt of Capital One, who regards teaching the bank’s staff about the processes she uses to futurecast as a core part of her job, does not disagree. “To my mind, anyone can think about the future. It is a shift we need to see so everyone is better prepared,” she says. “Our rate of experimentation and innovation is increasing exponentially. So we have to think further out to be competitive.”

Our futurists and science fiction writers offer some predictions for trends and technologies they believe could change our world.

Cyborgisation: Our perspective of what is natural and what is artificial will change. There will be no more principled opposition to altering things through gene therapy or other manipulation of natural organisms. But we will still have to define what it is that makes us human.

Data retention: Everybody is building devices that collect and indefinitely retain our data. We pay them to spy on us. Why are they sitting on that data when they know it will be breached? All our devices have backdoors that can be used by criminals and autocrats. It is an automatic gun that will go off.

Choreographed seamlessness: There will be pervasive data in the room, apartment or city. The cloud will know what you want before you do. If I am unfit my app will know and redirect me on a route to add 500 steps to my day.

Machine learning: Machines will increasingly make important decisions based on the collection of data and algorithms that sift out the most relevant intelligence. The algorithms are being sold as efficient and unbiased, but the data itself may be flawed. For example, there are concerns that US trials of predictive policing are based on data that is tainted by racism.

Asset light lifestyles: The concept of “ownership” will be much broader. People are already trying to live minimalist lives. Everything from cars to tools could be shared in the places you live and work. People will hardly own anything any more.

Blurring biological and digital borders: Will we move back and forth? Scientists have already converted Shakespeare’s sonnets into digital code and stored them in the DNA of bacteria, only to recover them intact after several generations. Will humans become their own hard drives?

Cryptocurrencies: These unofficial moneys will proliferate and it will be very easy to make your own — Burger King, for example, has introduced a cryptocurrency. The impact of millions of personalised currencies on banks, exchange rate systems and the way we transact will be significant. 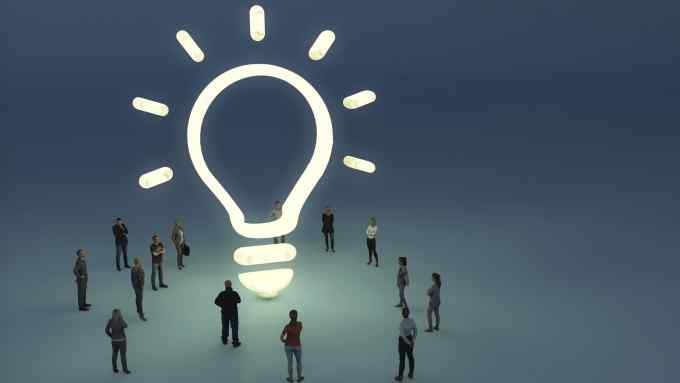