Walking into the white coolness of the Cisneros Fontanals Art Foundation, a converted former boxing gym close to Miami’s design district, almost the first thing that catches the eye is a black-and-white film playing on the wall. Prosperous well-dressed couples in 1950s garb watch their happy children in a playground; wide clean streets with smart buildings are cruised by shiny tail-finned cars . . . This is Cuba before the Revolution.

As Ella Fontanals-Cisneros, philanthropist, collector and creator of the Foundation, explains: “This was a time when artists were alive to all that was happening in Europe, North America, when they developed their own style, too.”

That style is brilliantly on display in Triángulo, an exhibition of three Cuban artists of the 1950s and 1960s working in a signature geometric abstraction that was at once highly sophisticated and yet radical, exploratory, playfully inventive.

One of the three, Carmen Herrera, is — astonishingly — still alive, and at the age of 102 is enjoying a new wave of international acclaim. Her hard-edged, strictly minimalist geometric canvases have been shown in the past few years at the Whitney in New York, in an important solo show at Lisson New York and elsewhere. It was Fontanals-Cisneros, however, who masterminded the artist’s resurgence some 15 years ago, after decades of obscurity, and another piece of film in the gallery is an eloquent insight into the sheer tenacity of such a long career. “I was so keen to make this film,” Fontanals-Cisneros tells me, “just in case, you know, we might not have another chance.”

With all three artists here, Fontanals-Cisneros has had to be a combination of historian and sleuth, curator and conservator, as well as avid collector. Dolores Soldevilla, known as Loló, spent formative years in Paris close to the artists of the École de Paris, and her versions of geometric exploration — in wood, in 3D structures of metal and other materials, as well as in paint — have an almost academic feel to their elegant formal and chromatic rhythms.

Such work, I remark to Fontanals-Cisneros, must be fragile: how was it preserved, though all the years of Loló’s obscurity, when abstraction was banned by the regime? And where did she find it?

“I found it in Cuba,” she replies, “Some of it had been kept, some of it was just thrown away, or put in [basements], some was very damaged. The climate in Cuba is bad, damp, and people couldn’t keep things well.” Much restoration was necessary. “History,” she laughs, “will have to forgive Cuba for that.”

Born in Cuba herself, she left for Venezuela at the age of 13, and there was to be no return for more than 20 years. Only in the past 15 years or so have her visits become more frequent — “I am in love with my country again,” she says, at the same time as lamenting President Trump’s reversal of the loosening of relations under Obama.

Now she is a passionate champion of Cuban art, and this exhibition — the 50 works are all from her own collection, which numbers some 3,000 international pieces — shows the depth of her expertise and concern. The third artist here, Romanian-born Sandu Darie, who arrived in Cuba via Paris in 1941, is the greatest revelation of the three. A fount of forward-thinking ideas about movement and light, as well as colour and geometric form, he produced kinetic pieces, acrylic sculptures through which projected light formed filmic effects, giant public art, small, intense, lyrical explorations of spatial relationships in collage, on wood, in gouache and much else. His international reputation meant that New York’s MoMA acquired works during his lifetime; yet he, too, fell out of the public eye almost completely after his death in 1991.

There are, though, lasting monuments in Cuba itself. A partnership between the Foundation and Microsoft allows visitors here a virtual reality showing, through headsets, of Darie’s public sculptures still on view in Havana, having survived through thick and thin, a tribute to the artist’s belief in taking art to the people.

With Art Basel Miami Beach’s strong focus, this year, on art from Cuba, it is richly rewarding to move from the newer work in the halls of the Convention Center into this fascinating past, and gain a sense of the historical progress of this very individual tradition, interrupted as it was. It’s a visit into a time-capsule, as evocative and powerful as that piece of black-and-white film. 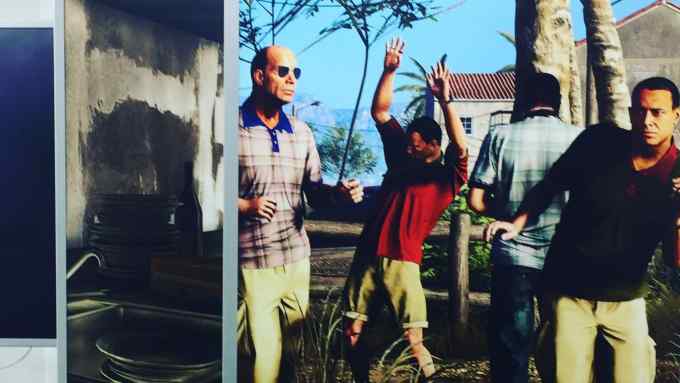