If you think the same, join us
FT Wealth Next Act

Collecting antiquities can be profitable yet their provenance can bite back

It was described as an exceptional example of its type, its “highly expressive face . . . and sensitively modelled body” epitomising the “high point” of ancient Egyptian artistic expression.

The limestone statue of Sekhemka, an Egyptian inspector of scribes who lived some 4,500 years ago, lived up to its billing when it came up for sale at Christie’s in 2014, shattering the auction record for an ancient Egyptian artwork. It sold for £15.7m, including fees, more than double its estimate of £4m-£6m.

Sekhemka was just one example of a trend in the antiquities market: the huge appetite of collectors for ancient Egyptian works. “There’s a never-ending fascination with ancient Egypt,” says Joanna van der Lande, chairman of the Antiquities Dealers’ Association, a trade body representing UK dealers.

Yet unlike other areas of the art market, buyers and sellers of antiquities are facing increasing challenges to prove the provenance of their works, as governments take a greater interest in whether artefacts may have left the country illegally and sales become more politically loaded.

The sale of the Sekhemka statue sparked an outcry, since for decades it had been part of the permanent collection of the council-run Northampton Museum and Art Gallery.

By selling it to help fund a £14m extension to the museum, on which building work finally started just a few weeks ago, the council attracted the condemnation of the Museums Association and was struck off Arts Council England’s list of accredited organisations. Its ostracism left a clear message: raiding a public collection of its cultural heritage for funding purposes was against the principles of museum stewardship.

For its private buyer, though, the statue offered something that has become increasingly important when buying works of antiquity: a well-established provenance. In Sekhemka’s case, going back to 1850.

Just a few decades ago, dealers, auction houses and buyers felt much less pressure to trace back the ownership of an object to give themselves comfort that it had been legitimately sourced.

Now, provenance has become a hot issue as buyers seek assurances that they are not buying illicit or looted works, in a climate where cultural ministries are increasingly challenging the ownership of objects that come up for public sale.

Jane Levine, Sotheby’s worldwide director of compliance, says: “The market has changed in the past 15 to 20 years. If you’re a collector or dealer of antiquities, you’re now paying a lot more attention to provenance and what’s behind it. That’s a good thing.”

This can mean painstaking work for dealers and specialists at auction houses, as the more relaxed attitudes of the past can leave an object with a patchy record of ownership. Research may involve liaising with antiquities departments at museums or poring over library documents.

“We want to be able to verify provenance independently through documents and by using external, third party verification. The internet can also be helpful,” says Laetitia Delaloye, Christie’s London head of antiquities. “We want to make sure there are no unexplained gaps.”

Even a good provenance, however, will not always settle matters when it comes to antiquities. Last month, for instance, the Iraqi government called for a well-documented Assyrian relief on sale at Christie’s to be repatriated. The auction house said the work met “the applicable laws that recognise the existence of the legitimate market in such works”. In spite of public protests, the sale went ahead and, at $31m, broke the record for an Assyrian art work.

Part of the appeal of antiquities, usually defined as objects created in the Mediterranean region and northern Europe before the Middle Ages, is the connection with long-disappeared cultures that nonetheless have a discernible link with our own.

“As humans we’re interested in the past. It crosses cultural barriers and religious barriers,” says van der Lande.

Sometimes they are objects of great beauty or made with extraordinary technical skill: they could be magnificent works of sculpture or more mundane day-to-day items such as a Roman unguentarium, a glass container for oil. In the long term, antiquities tend to hold their value, particularly when compared with the seesawing values of some contemporary art.

Delaloye says: “At the moment Egyptian art captivates the imagination. Roman marble sculptures also perform well. And special mention must go to Cycladic idols, with their stylised look, which has been the base for so much contemporary and modern art.” 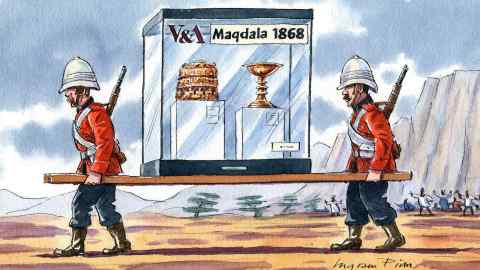 Indeed, she adds that over the past 10 years, the price of these ancient Cycladic objects, which can carry the distinct look of abstract mid-20th century sculpture, has risen 10-fold.

Despite the greater focus on provenance, there are some in the academic community and in the culture ministries of archaeologically rich nations who believe that those in the antiquities market are not doing enough to ensure the objects that pass through their hands are properly verified.

Christos Tsirogiannis, a forensic archaeologist and associate professor at Aarhus University in Denmark, has prompted the withdrawal of a number of antiquities from sale after alerting the authorities to his investigatory work on objects he believes were being sold at auction illegitimately or with questionable provenance.

His advice to would-be buyers of antiquities is to exercise maximum caution when considering a purchase. “Open at random any catalogue from an auction house or antiquities dealer and check how many objects are detailed as accompanied by export licences from the true country of origin. Usually there are none.” That, he says, can leave the buyer at risk, since there is no documentary proof that the object left the country of origin legally.

Buyers and their middlemen should themselves contact the relevant authorities in these countries, typically the culture ministry, to check that a work’s sale is legitimate, Tsirogiannis urges. “Taking the initiative to contact the authority shows a proactive and honest approach.”

Yet auction houses and dealers say export licences are seldom present or available for objects that have been bought and sold for decades when such documentation was not deemed necessary. “We’re witnessing a concerted effort to push the legal standards [for antiquities trading] in ways that go far beyond what the courts have asked for,” says Levine.

In an attempt to gain some legal clarity over what counts as legitimate trade in the antiquities market, this year Sotheby’s took the unprecedented step for an auction house of filing a legal suit against Greece’s ministry of culture in a New York court.

The case revolves around the disputed ownership of an ancient Greek bronze horse, bought by the vendors in 1973. After Greece wrote to the auction house on the day before it was due to be sold, questioning whether the piece had left the country legitimately, the auction house felt it had no choice but to pull the work from the sale. In the suit, thought to be the first time an auction house has taken a government to court — Sotheby’s asked the court “to clarify the rights of legitimate owners of ancient works of art and protect clients against baseless claims”. The case is ongoing.

In the meantime, buyers of antiquities may prefer to give renewed consideration to a term often expressed in the language of ancient Rome: caveat emptor (let the buyer beware).