The Cause: Dr Shini Somara is shaking up STEM education

The mechanical engineer and TV presenter is rewriting the male world of science, one storybook at a time

Back when mechanical engineer and fluid dynamicist Dr Shini Somara was at secondary school in north London, she submitted A-level coursework that was awarded a zero-per-cent grade because her teacher thought it was too good to have been done by her. Telling the story now, she simply shrugs. “I’ve had so many experiences where I didn’t stand up for myself,” she says. “But failure is so important for growth and development. I think often that’s not taught in schools. I’d love it if there were more engineering clubs where kids could just test things to destruction!”

Somara didn’t only pass those exams, she went on to complete a doctorate in engineering. Today, she presents TV shows for the BBC and Al Jazeera on science and technology; has launched her own podcast, Innervation, which gives a platform to women in the male-dominated world of STEM (science, technology, engineering and mathematics); and has, most recently, authored a children’s book, An Engineer Like Me, to encourage young readers to think creatively about engineering.

Hers was an upbringing where logic and curiosity were actively encouraged; an interest in engineering was nurtured from a young age. Somara’s Sri Lankan father was a mechanical engineer and all three daughters gravitated towards the sciences. “It’s cool when you go to my parents’ house,” she says, recalling the DIY they all did, “there are so many Heath Robinson solutions to things.” It’s this passion that she is keen to pass on to children today. “Learning about how our world works and trying to find solutions that fit in with these universal laws is an amazing thing. That’s why I encourage people to study STEM – it gives you tools you wouldn’t gain anywhere else.”

An Engineer Like Me is the beginning of a series of four books – a scientist, a coder and a mathematician star in the next three. In this first story, the relentless questions of a young girl are met by the wise responses of an informed, engineer-minded grandma. It’s an unusual and much-needed dynamic, illustrated beautifully by Nadja Sarell.

Though the book is by no means autobiographical, the sense of adventure mirrors Somara’s career trajectory from PhD student to LA TV presenter. Seven and a half years studying mechanical engineering at Brunel University in London left her in a place where she felt she needed help to come out of her shell, and she used acting classes and lectures to build her confidence. It was at one of these lectures that she met the mathematician and former BBC producer Simon Singh, who offered to lend Somara his Enigma machine – an encryption device used by the Germans in the second world war – to tour schools with.

Soon she found herself with another offer: to present a technology programme on Al Jazeera America. “I’ve always wanted to communicate science and tech, to meet other people in the STEM world, and this was my chance.” She remembers being unperturbed by her agent’s concerns that things might be difficult given that she was a person of colour, with a British accent. “Everyone was thinking I couldn’t do something, but I did it anyway,” she says. “I’m a person fighting to do the things I want, regardless.”

The Aesthete
“When not working on a cure for Covid, I play accordion on the rocks” 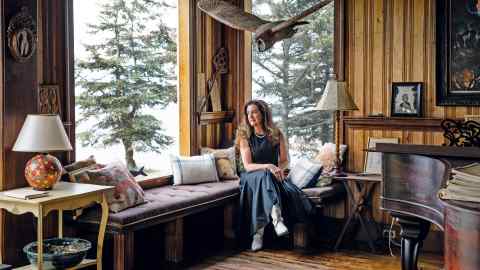 Her confidence is hard-won: despite years in the engineering world, feeling different made her “too nervous and shy to elbow my way around”, she admits. The hope is for her book to foster the confidence in children to be different. It’s a mission that sits in good company: Democratic vice presidential nominee Kamala Harris’s book Superheroes are Everywhere, which inspires children to be the best they can be, made it onto The New York Times Best Seller list when it was released last year.

“I’m juggling quite a few projects at the moment,” says Somara, whose busy agenda includes a handbook for teenage girls. “I’m keen to give young people a sense of what the world has to offer. I don’t want anyone – whether they’re male or female, whether they’re of colour or not – to feel like they can’t flourish.”