Watches and Wonders 2021: Conversation pieces from the shows in Geneva and Shanghai

After coronavirus restrictions put paid to last year’s physical Watches and Wonders fair, the Geneva-based organisers have created a combination of online and offline shows this year, with events taking place on two continents over 17 days.

Special ReportWatches and Jewellery: April
Watches and Wonders’ Emmanuel Perrin: ‘Vital for watchmaking to keep our own fashion week’

The digital edition of W&W Geneva starts today and runs until April 13, while W&W Shanghai will be open to the trade and public “in person” from April 14.

Louis Vuitton has created a Carpe Diem watch with a complex, automaton movement featuring jumping hours, retrograde minutes and power reserve. The highlight, however, is the “on demand” time display that is activated by using the reptile-shaped pushpiece on the right of the case. This causes the snake’s head to lift and reveal the hour aperture, while the oscillating tail flicks up and down to mark the minutes. Simultaneously, flowers appear in the eye socket and the jaw emits a mocking laugh and the words “carpe diem”. The gruesome spectacle lasts for 16 seconds before everything reverts to “normal”. c. £400,000

Vacheron Constantin first revived the American 1921 back in 2009 — and has now introduced three new, centenary versions: a 100-piece platinum edition and two white gold models in 36.5mm or 40mm sizes. The offset dial and corner-mounted crown were allegedly introduced so drivers could wear the watches on the back of the wrist, making it easy to check the time without releasing their steering wheels in the days of un-metalled roads. From £27,000 to £45,300.

The horological arm of 133-year-old Lucerne-based jewellery and watch retailer Bucherer first dipped into its archives to create a Heritage collection back in 2018. All Heritage models aim to combine postwar design cues with contemporary features such as larger case sizes and sapphire crystal backs. The new Bi-Compax chronograph is based on a 1950 model of just 34mm diameter that featured an exquisite, pink champagne dial. This 41mm reboot sports the so-called “reverse panda” arrangement of a black dial with silver chronograph counters, with only 888 examples being made. £5,500

IWC’s partnership with the US Navy Strike Fighter Tactics Instructor course — commonly known as Top Gun — dates back to 2006. The latest watches have cases made from sand-coloured ceramic, dark brown dials and sand-coloured straps. Two models are available: a three-hand version with seven days of power reserve that will be produced in 250 examples per year, and a high-horology perpetual calendar, moon phase model, just 150 of which will be made annually. £13,600 (three-hand) £28,600 (perpetual calendar)

Hublot broke new ground in creating a ceramic watch case tinted with colour when it launched a bright red version of its signature Big Bang model back in 2018. Since then, it has developed blue, beige and green ceramics — and now the screaming yellow hue seen on the case and bezel of this new, 250-piece special edition. The 42mm watch, which has an in-house, self-winding movement visible through a sapphire back, chimes right in with the Pantone Matching System’s choice of Illuminating as one of two Pantone colours of 2021. It is described as “an optimistic yellow”. £21,700

In 2006, Jaeger-LeCoultre celebrated the 75th anniversary of its signature Reverso with a haute-horlogerie version called the Triptyque that wowed watch fans by having three dials driven by the same movement. Now, to mark 90 years of the famous flip-case watch originally designed for polo players, the brand has unveiled the Quadriptyque, the world’s first watch to feature four functioning faces. The 11 complications include a perpetual calendar and three displays of lunar information that, says the maker, predict events such as supermoons and eclipses. €1.35m

Since Tudor watches became available in Europe again in 2014 after a 10-year absence, the Rolex stablemate has launched hit after hit. This latest Black Bay Chrono will seem familiar to anyone who saw the original model released in 2017, but the case has been subtly reworked and there are new black dials with contrasting sub-counters that might appeal to fans of vintage versions of the Rolex Cosmograph. As well as a great quality chronometer-certified column wheel movement, the watch also comes with a five-year transferable guarantee. £3,660-£3,990

Cartier’s Must watches date back to the 1970s when the brand was going through hard times. The then managing director Alain Dominique Perrin came up with the idea of producing more affordable versions of the historic Tank watch — previously only available in precious metal — with gold plated cases and unusually-coloured dials. The watches developed a cult following, and Cartier has now reprised the idea with five fresh Must models that include mechanical and quartz versions as well as one with a Solarbeat photovoltaic, solar-powered movement. From £2,270

Sports watch king Tag Heuer harks back to 1978 with its Aquaracer Professional 300m Tribute to Ref. 844, which pays homage to Heuer’s dive watch that was a best-seller in its day. The tribute takes several cues from its forebear, such as the red 24-hour scale, perforated rubber strap and flat black dial, with the vintage feel being further enhanced by buff-coloured hands and hour markers — but a 300-metre water resistant case made from lightweight, corrosion-proof titanium containing Tag Heuer’s Calibre 5 automatic movement bring the watch right up to date. Seven other, non-limited references of the new Aquaracer are also available — four at 43mm and three at 36mm. £3,600 (Tribute) others from £2,350.

Germany’s A Lange and Sohne usually unveils something spectacular at Watches and Wonders — and the fact that this year’s event must be virtual has not prevented Glashutte-based manufacturer from pulling out all the stops. Despite measuring a practical 41.9mm in diameter, this watch contains a beautifully decorated, 621-part perpetual calendar movement that automatically accounts for short months and Leap Years, with months being indicated by a peripheral ring specifically developed to fit with the Lange 1’s signature, asymmetric dial layout. The regular version gets a pink gold case and grey dial, but a white gold/champagne dial model will be limited to 150 examples. £87,900/£97,600

Zenith describes its new Defy sports chronograph as being “resolutely futuristic” and having a case that is “faceted and carved like a boulder in a storm”. Measuring 45mm in diameter, hewn from titanium and featuring a screw-down crown and protective guards for the chronograph pushers, the watch is clearly designed for adventure while also being one of the most precise mechanical timekeepers on the planet — its El Primero 9004 movement can record elapsed times down to 100th of a second thanks to an independent chronograph escapement that oscillates at 360,000 vibrations per hour. Cases come in two types of titanium finish, as well as in a titanium and rose gold mix. From £15,300 to £18,500

Many luxury watch brands are now showing concern for the environment, but Panerai has gone further than most with this concept model. The maker says 98.6 per cent of the weight of the watch is made from “recycled-based” materials, with the case, dial and bridges being hewn from an aerospace-grade metal which is more than 80 per cent reclaimed. The SuperLuminova that enables the dial to glow in the dark is also recycled, as is the silicon used for the escapement and a proportion of both the sapphire crystal and the gold hands. The watch is not yet available for sale.

Explore the Special Report
READ MORE
Watches and Wonders’ Emmanuel Perrin: ‘Vital for watchmaking to keep our own fashion week’ 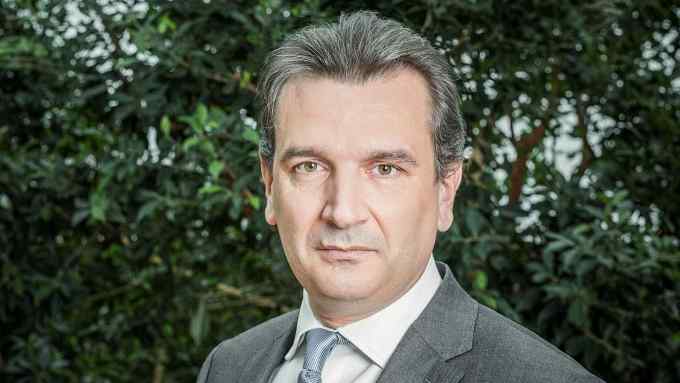