Accessibility helpSkip to navigationSkip to contentSkip to footer
HTSI  Jewellery

The evil eye is often depicted in jewellery, worn as a talisman by cultures around the world to ward off malevolent forces. Tabayer founder and CEO Nigora Tokhtabayeva launched her jewellery brand around the symbol of protection in 2019. “I commissioned a bespoke necklace with a protective eye symbol for myself, and when I started wearing it, I got so much great feedback it inspired me to start my own line.”

She quickly came to reassess her first design, however. “Other religions can’t wear an eye,” says Tokhtabayeva, who grew up in Uzbekistan and is now based in Miami. “So I took some time to do the research and transform this very literal sign of protection into something more global that can combine all cultures and religions.”

The rebranded version of Tabayer launched in September with a more abstract idea of protection at its centre. Tabayer’s latest designs nod to the Mesopotamian goddess Inanna, who was often represented with two reeds knotted together to form a hook, which translates into a simple curve that wraps around a finger, or a wrist, or onto itself, to be worn as a pendant or earring. Some pieces are subtly encrusted with pavé diamonds – such as the gold hoop Oera earring (£5,950) – while others feature a single diamond set discreetly off-centre – as in the large Oera ring (£25,500).

Tokhtabayeva, who has no formal training in jewellery design, works with a creative team in London, while all her jewellery is made in a family-owned factory in Italy. She also only uses diamonds that comply with the Kimberley Process and Fairmined gold, which “ensures that a fair working wage is paid and that acceptable working standards are met, including gender equality, and it’s done in a way that protects ecosystems”.

HTSIHow To Spend It. . .  wisely: the green issue
The good gem guide 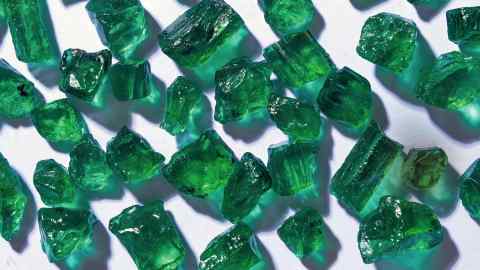 The choice to use Fairmined gold means the material cost is slightly higher than alternative sources, but Tokhtabayeva says she feels a responsibility to ensure her jewellery is made in a socially responsible way. “I’m a mother of four children,” Tokhtabayeva continues, “and if I’m going to build a brand, I want to build one that makes the world a better place for future generations by establishing better practices and standards.” These are jewels that offer protection in both a symbolic and literal sense.