With rapid growth forecast, can homegrown startups live up to all the hype?

When US retail giant Walmart agreed to buy the Indian company Flipkart in May for $16bn, it was easily the world’s biggest ecommerce buyout — a powerful sign of how India’s digital sector is capturing the attention of some of the largest global companies.

“India is one of the most attractive retail markets in the world,” the Walmart chief executive Doug McMillon said at the time, promising to help Flipkart, an online marketplace, “transform” an ecommerce sector that is far smaller than those in China or the US.

For India’s legion of ecommerce entrepreneurs, the deal raised two questions. First, is Mr McMillon right to forecast massive growth for Indian ecommerce, which remains tiny relative to the size of the economy? And, no less important for these local start-ups: in a market that has already attracted significant investment by Walmart and its US rival Amazon — which has committed $5bn to Indian expansion after being beaten out by Alibaba and others in China — do smaller homegrown peers have a chance to compete?

It had already been a turbulent few years for Indian tech entrepreneurs. In 2014 and 2015, foreign investors such as New York’s Tiger Global Management and SoftBank of Japan pumped huge sums into Indian start-ups. Many of these start-ups had little idea what to do with the money, says Sandeep Aggarwal, the founder of the ecommerce site Shopclues and of Droom, an automotive marketplace.

We call them motorcycle families . . . A three or four-person household, which owns a motorcycle but not a car, lives in a one-bedroom or at most a two-bedroom house in one of the poorer parts of town

“Anyone looking for $50m got $500m — there was a lot of irrational exuberance in the market,” Mr Aggarwal says. “And these companies used most of this money only to give very deep discounting. It was a very myopic mindset.”

Such concerns at last weighed on investors, and the flow of funds slowed dramatically in 2016. Ecommerce growth flatlined that year as start-ups were forced to cut back on discounts.

But the bulls are now back, after a recovery in ecommerce growth last year. Walmart is not the only investor making big bets: SoftBank has invested about $4bn in Indian tech companies over the past 15 months with large investments in Flipkart as well as fintech group Paytm and Uber rival Ola. India’s ecommerce market remains tiny compared with its population, at less than $20bn in sales last year according to most estimates — but Morgan Stanley forecasts that this figure will grow tenfold within a decade.

For many Indian digital entrepreneurs, the key to achieving such dramatic growth will be pushing beyond the wealthy urban elite who drove the first stage of ecommerce growth. In a country of 1.3bn people where the average annual income is below $2,000, customers with western-style incomes and shopping habits are a tiny minority.

“We were starting to plateau — the 30m top customers, that segment ran out fairly quickly,” says Albinder Dhindsa, co-founder of Grofers, an online grocery shopping service.

Grofers was available only in English, but has now launched a Hindi service as it chases shoppers who are further down the income pyramid — albeit still prosperous by Indian standards.

“We call them motorcycle families,” Mr Dhindsa says. “A three or four-person household, which owns a motorcycle but not a car, lives in a one-bedroom or at most a two-bedroom house in one of the poorer parts of town.”

In reaching such households, start-ups have been helped by a surge in internet usage that followed the 2016 arrival of the disruptive new mobile operator Reliance Jio, which has slashed the price of mobile data.

“When Jio came in, the woman of the house got a smartphone,” Mr Dhindsa says. “And it’s typically the women who take care of the non-discretionary shopping.” 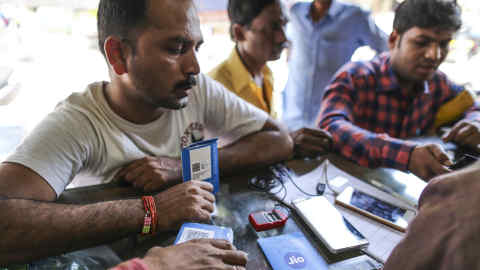 Start-ups such as Grofers are set to face stiff competition from Flipkart, which is poised to pursue a big expansion into groceries, says the retail consultant Sanchit Vir Gogia. Many niche businesses will ultimately need to sell out to Walmart or Amazon, as the two companies take advantage of their economies of scale, he says. “The cost of customer acquisition is so high — it’s not sustainable in the long term.”

Still, some start-ups are confident that the Indian market will prove big enough for niche groups as well as large companies. Qtrove, founded in 2015, is a “curated” online marketplace focused on handmade craft items. “We’re not competing with the Amazons of this world,” says founder Vinamra Pandiya. “We think the addressable market is about 10m: people four or five years into their careers, who understand the importance of a sustainable lifestyle. That market is going to explode.”

Other people note that the Indian market is particularly challenging for smaller start-ups that lack the scale to build their own distribution networks. “The one part where India is really struggling is that we don’t have good logistics partners — it causes a huge deterioration in our customer service,” says Vinayak Kalani, the founder of Bollywoo, a website that offers film-inspired fashion, with customers mainly in smaller towns and cities.

The funding environment for Indian tech entrepreneurs should be bolstered by the takeover of Flipkart, which netted a windfall for investors such as Tiger Global, says Neha Singh, founder of the research group Tracxn.

Helped by SoftBank’s return to form, funding had bounced back last year, more than doubling to about $10bn according to Tracxn. The still small scale of ecommerce — and of organised Indian retail in general — means India’s ecommerce market has potential for large-scale growth, Mr Aggarwal says.

“When I came here in 2011 after 15 years in Silicon Valley, only 2m people shopped online. Now that’s gone to 60m, which is still tiny,” he says. “India will have new entrepreneurs in this space for the next two decades. We have only scratched the surface.”