Accept & continue
Manage cookies
How To Spend It Sustainability

Out on fashion’s eco-frontier, scientists have developed clothes that photosynthesise

Microbes have had a bad run. As a result of Covid-19, the world’s collective fear of viruses and bacteria has skyrocketed. But what the headlines don’t often mention is that microbes aren’t all bad: they provide the oxygen for roughly one in every five breaths we take. Without them, we wouldn’t have red wine, Roquefort or sourdough. And without them, two young pioneers in a garage in Poplar, east London, wouldn’t be creating clothes that “breathe”.

Dian-Jen Lin and Hannes Hulstaert are the duo behind Post Carbon Lab, a science-lab-meets-fashion-studio creating zero-waste microbial dyes that harness photosynthesis to remove carbon dioxide from the atmosphere. In 2017, Lin was presented with the Kering Award for Sustainable Fashion.

“Fashion is based on a very exploitative relationship with nature,” says Lin. “Around 20 per cent of the world’s industrial water pollution comes from the treatment and dyeing of textiles.” With 350,000 tonnes of clothing ending up in landfill each year in the UK, the overproduction of clothes and their environmentally damaging life cycle challenges the existence of even the most ethical brand. “That’s why Post Carbon Lab is a service provider. We could easily launch our own brand of photosynthetic T-shirts, but we wanted to address the existing problem, not add to it,” says Lin.

It’s radical because it means an adjustment in behaviour

The lab’s trailblazing biotechnology incorporates nature’s process of carbon capture – namely photosynthesis – by which plants take in carbon dioxide and turn it into glucose and oxygen. The “plant” here is instead a “living layer” on the textile cultured using photosynthetic microorganisms. Wearing a garment that releases oxygen improves the immediate environment of the wearer. It takes just six weeks or so of treatment at Post Carbon Lab for a T-shirt to produce the same amount of oxygen as a six-year-old tree in the same period, and it continues to photosynthesise (though the rate is variable) once the treatment is finished.

Like a plant, textiles treated with microbial pigmentation have basic survival needs. “It’s radical because it requires an adjustment in mentality and behaviour by the consumer,” explains Lin. “They have to adopt a caretaker role. But we’ve developed the coating so it responds to artificial light and only needs a little moisture – you can hang it up after you shower and the humidity will be enough,” she adds. Products can’t be machine-washed and require a level of care that regular textiles do not – but if it encourages a shift in the disposable attitude towards fashion, the drawbacks of using microbial dyes are undoubtedly outweighed.

In 2017, New Balance was involved with research into responsive microbes in sportswear, and in 2003, designer Suzanne Lee coined the phrase “biocouture”. “I’m fascinated by [Dian-Jen’s] integration of scientific methodologies and experimentation from algae research with speculative design in fashion,” says Dr Anne Jungblut, a research scientist at the Natural History Museum. Professor Mike Allen, a microbial biochemist at Plymouth Marine Laboratory, also recognises the promise of biotech in fashion: “Cyanobacteria and algae are important microscopic organisms – their evolution led to the rise of oxygen on Earth. Looking to the future, it’s an exciting idea: self-cleaning clothes, medical diagnostics, even environmental-monitoring applications can be envisaged. Microbes are incredibly diverse and the possibilities for exploiting their potential are limited only by our imaginations.”

Olivia Rubens, the Canadian designer who won the 2020 ITS Responsible Fashion Award, presented her microbial-pigment-dyed cardigan, created in collaboration with Post Carbon Lab, at Helsinki Fashion Week last year. “There’s a disconnect between science and fashion,” she says. “There are important conversations about where things come from and who made them – but we need to address waste and overconsumption. I think the only way we can [do that] is by working with scientists.”

How To Spend It
S is for... sustainable, sexy, Stella McCartney 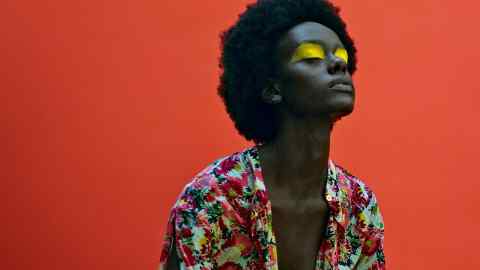 Rubens was drawn to Post Carbon Lab’s work by its zero-waste approach. “I was looking at natural dyes, and ones that required little to no water. Cyanobacteria produce colour simply by growing,” Rubens explains. Right now, the photosynthetic coating only comes in green, such is the nature of the chemical reaction, but other shades are in the piloting phase and the microbial pigmentation comes in many colours.

Post Carbon Lab’s next project is under embargo – my money’s on Stella McCartney or Vollebak, both of which champion young innovators and environmental activism – but the team is wary of exclusivity. “We function like a social enterprise, offering our services at cost price so people can experiment with us, and we want our work to be accessible,” Lin says. “Often consumers think the best way to be sustainable is to buy the latest product. But the most sustainable clothes are the ones that already exist.”

Get alerts on Sustainability when a new story is published