Pud it on the barbecue

It’s time to get sweet on the grill

In the West, we tend to think of barbecues in the narrowest terms. We mostly use them to cook meat. Maybe fish and vegetables. But what about desserts? A number of cooks are making the case for puddings sizzled over fire, too. Helen Graves is the editor of Pit, an award-winning zine that aims to look beyond the “Bro-BBQ” culture that tends to dominate. Her new book Live Fire (Hardie Grant, £26) features recipes inspired by global traditions (such as Eritrean barbecue and Nigerian suya) as well as desserts.

“We have been lacking in a spirit of adventure for so long when it comes to barbecue,” she says. Desserts are one way of getting us to think more expansively. Only don’t expect to find that campfire classic – a banana wrapped in foil with chocolate inserts – in her book. “Hot banana is like hot avocado,” she scoffs. “Just wrong.”

Instead, she favours recipes that really harness the “extra dimension of flavour” that comes with fire cooking: smokiness and char. Her recipe for smoked cherry and whisky butterscotch sundae starts with throwing a small piece of wood on lit coals to generate smoke. Then tumble some pitted, halved cherries into a roasting tin with a sprig of rosemary, lemon juice, maple syrup, salt and water and set on the cooler side of your barbecue with the lid closed for 30 minutes, until the fruit collapses and releases some of its juices. Meanwhile, whip up a whisky butterscotch – “the whisky plays on the smoky flavours of the cherries” – and layer with the cherries and vanilla ice cream in a sundae glass. “Serve this to the person who says barbecue desserts are always rubbish,” she writes defiantly. (For those with gas barbecues, wood chips in a smoker box will generate a similar smoky flavour.)

Stone fruits are particularly good cooked over fire, either roasted in a tin (using indirect heat) until they turn soft and jammy, or charred and blistered on the grill. Graves is fond of roasting peaches in a sweet wine, vanilla extract and star anise liquor, then showering the smoky fruit with crushed ginger nut biscuits and topping with clotted cream. River Cottage chef Gill Meller is a fan of fire-cooked pears. His new book Outside: Recipes for a Wilder Way of Eating (Quadrille, £30) includes a recipe for grilled pears with chestnut honey, tahini and oats. “There’s something about a pear’s robust granular texture that works well on a hot fire,” he says. “They can handle the high heat, they won’t fall apart and they carry the flavour of smoke and charring beautifully.” Meller also bakes foil-wrapped parcels of apples sprinkled with brown sugar and dabbed with butter in the embers, which he pairs with rice pudding cooked in a pot over the fire. “My approach to outdoor cooking isn’t so much about getting the barbecue going as bringing the kitchen outside,” he says. “Nearly everything you cook on the hob can be translated to working outside.”

If anything, he sees barbecue desserts as a fantastic way of experimenting, throwing caution to the wind and having fun; in other words, his mode of cooking. “How about a handful of gooseberries rolled over the grill till they soften and blister, then bashed up and folded through yoghurt with crushed meringue for a delicious smoky gooseberry fool?” he improvises. “Or strawberries put directly in the embers till they blacken slightly, then crushed onto brioche with peanut butter for an amazing peanut butter sandwich. I’ve never tried that but it could work.”

Fun is surely the word to describe a dish concocted by Maryland-raised chef Christian Stevenson (aka DJ BBQ) in his new book Fire Feasts (Quadrille, £16.99). His recipe for bacon-wrapped Oreos with vanilla ice cream is best achieved using frozen Oreos, which are less likely to disintegrate on the grill. Stevenson also suggests dropping four lumps of lit coal into your hot cream before freezing it, to impart the flavour of wood to your ice cream. (Obviously use pure lumpwood charcoal – he recommends Whittle and Flame – instead of charcoal soaked in retardants or other chemicals.)

For Graves, nothing captures the gung-ho spirit of fire-cooking better than baking a cake on your barbecue. “Upside-down cakes are particularly forgiving,” she notes in her recipe for upside-down nectarine cake with thyme cream. This is baked in a skillet across from the coals for 40-50 minutes. Meller offers a similarly enticing recipe for sticky-plum, sage and almond upside-down cake, where the syrupy plum juices help keep the sponge from drying out, which is more of a hazard cooking over fire than in an oven. “There is some jeopardy involved,” Meller admits. “But it’s exciting to try something new and your guests are going to be on the edge of their seats when you turn out a fruit-based fire-cooked dessert.”

HTSI
Low and slow – how to barbecue beef ribs 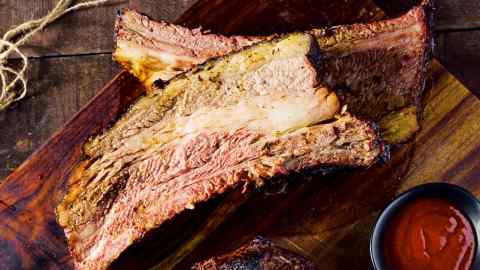 To accompany it, how about a suggestion from chef Hus Vedat of Barboun and Tavla restaurants in London? He buries his cezve (pot) of Turkish coffee in the dying embers to recreate the traditional method of brewing Turkish coffee over hot sand. “The temperature is just right,” he says. “The coffee warms slowly and you end up with the perfect creamy finish.” Who needs a hob?