If you think the same, join us
How To Spend It Visual Arts

Avant Arte are on a mission to make art ‘radically more accessible’. And it starts with the drop

In 2017, Christian Luiten gave a TEDx talk in which he told an audience at London’s Courtauld Institute how he discovered contemporary art through rap music. In an endearingly unguarded manner, the 23-year-old explained that growing up in the small Dutch city of Almere it was Jay-Z lyrics and Kanye West album covers that were the spark behind Avant Arte – the digital platform he started in 2015 with his childhood friend Curtis Penning. He explained that their venture is both an app – a “kind of Tinder for art”, to connect with and buy work from contemporary artists – and an Instagram page of “art they like”. At that time, Avant Arte had an impressive half-a-million followers.

The talk marked a pivotal moment for the young entrepreneurs. A few months earlier, they had hosted their first offline event, a sell-out exhibition of emerging artists at Unit London gallery. Shortly afterwards, the two friends released their first limited editions online – two glossy, colourful prints by Icelandic abstract painter Katrin Fridriks. At €900 apiece, the 140 prints were dropped like a fresh batch of sneakers, and sold out in two hours. In the duo’s bid to make “art as popular as music or as widely collected as fashion”, it was a strong opening gambit. It was also somewhat serendipitous, says Luiten, now 27, baseball-capped and casually confident over Zoom. “Katrin was the first artist we met online. Whenever we post an artist’s work on Instagram, we send them a message, and that’s how we build some relationships. So when we thought about doing prints, that’s where we started.”

Now creating limited editions has become Avant Arte’s main focus. To date, it has released more than 80 exclusive works. It has more than 2.2 million Instagram followers. And as its fanbase has grown, so has the standing of its collaborators – from the Chapman brothers and Marc Quinn to Chinese artist Cai Guo-Qiang and American conceptualist Jenny Holzer. But what’s the draw for such world-renowned artists? When their work is consistently sought out by global collectors and major museums, do they care about online exposure? “They like the passion we have, but also the new audience we are bringing to the art world,” says Luiten, pointing out that 90 per cent of Avant Arte’s followers are under 35. “They’re the future,” adds 25-year-old Penning.

For Holzer, creating a sculptural edition became a charitable action, with the sale of her 25 glass pharmacy jars – each filled with packets of condoms printed with her signature “Truism” slogans – raising money for the New York City Aids Memorial. It also gave the 70-year-old artist the opportunity to tell the story of Aids to a millennial audience via a series of posts about the New York artists who died from the disease in the ’80s and ’90s, such as Paul Thek and Darrel Ellis, on Avant Arte’s Instagram page.

But the business is not all about the likes, mentions and DMs. Both Penning and Luiten agree that while Instagram can make art far more accessible to those intimidated by the gallery set-up, the best way to experience art is in person. In “normal times”, the duo are “nearly always” travelling – visiting artists’ studios as well as forging “real, human relationships” with collectors, gallerists and curators, such as Elena Foster, the wife of architect Norman Foster, who orchestrated the meeting with Holzer.

90 per cent of Avant Arte’s followers are under 35

“The art world is a relationship world at the end of the day, and I think that’s why for a long time people thought that selling art online wouldn’t work,” says Luiten, who is keen to prove that it works best when the online and offline worlds are connected. In 2019, they collaborated with Perrotin gallery on a print by Los Angeles-based artist Zach Harris. For the gallery’s senior director in New York, Valentine Blondel, the partnership was a no-brainer. “Avant Arte enjoys a cult following, especially across Europe,” she says. “They also put immense care into their editions. And they have a well-earned reputation for extraordinary and flawless editions, as well as unique works on paper.”

Today, the selection of artists is chosen with curators such as Larry Ossei-Mensah, the Ghanaian-American co-founder of diversity-promoting collective ArtNoir. “We are trying to be eclectic in terms of the artists we work with,” says Luiten. “Artists from different countries, different continents, different age groups. Earlier this year, we did a release with Tomás Sanchez, a 72-year-old Cuban-born artist who lives in Costa Rica; the next week we did something by Simphiwe Ndzube, who is 31 and from South Africa.”

Fostering young talent is something they want to build on both with editions and further pop-up exhibitions – which, Covid-19 restrictions allowing, they will host in Florence and Hong Kong this year. There’s also an undeniable thrill in seeking out the big names of tomorrow, says Luiten, giving the example of Chicago-born painter Robert Nava. “When we met him in 2017, he was still a truck driver. Now he’s represented by Pace Gallery. Seeing an artist you really believe in become a big star, it feels good.” In the past two years, Nava’s consciously naive canvases have risen in price from $10,000 to $160,000 – and this sends another message to collectors: that it’s not just about followers, it’s also about quality. “It’s subjective, of course, but that’s how it works.”

In terms of their own financial success, however, they decline to give numbers. “We do well,” says Luiten, “ but the money we make we put back into the company.” Avant Arte now employs 15 full-time members of staff, based largely in London and headed up by 33-year-old CEO Mazdak Sanii, who joined in 2018 from online music broadcasting platform Boiler Room. If anything, the pandemic and its online-first agenda have only added to the brand’s growth. This year it will release more than three times as many editions as in 2020, including a sculpture by Japanese artist and skateboarder Haroshi, in black or white marble (50 of each will be released in June, at €10,000); and a series of soft sculptures by self-taught 28-year-old Jamaican-Canadian artist Tau Lewis in the autumn. Several projects in China, where Avant Arte has a strong following, are also on the cards.

Such momentum means that demand for some editions now far outstrips supply, and therein lies an issue: the same scalpers who first bag those Adidas Yeezy sneakers or Dover Street Market fashion drops then offer them for resale. When Avant Arte released 200 works from London street artist Paul Insect online in January, they sold out in 30 seconds; just 10 days after the launch, one had sold on eBay for $2,999, a swift mark-up from the original price of $650.

How To Spend It
Anthony Hopkins: ‘Act as if it is impossible to fail’ 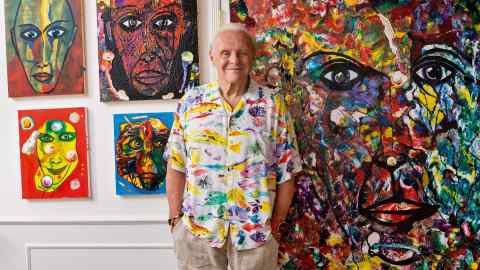 With this in mind, Avant Arte operates a system of pre-sales to its collector base and those who express early interest via email. “With the Jenny Holzer edition, for example, we were careful about making sure we knew all the buyers, as she didn’t want loads of her works going up on auction sites,” says Sanii. This meant that all 25 editions were allocated prior to launch. For some followers, this didn’t line up with Avant Arte’s mission statement: “To make art radically more accessible.”

Finding a balance is a work in progress. “We have learnt to be transparent,” says Luiten, who concedes that selling out before launch was a misstep. “So now, for every collaboration, we will tell people: ‘Eighty per cent of the sales are going to be on pre-orders, 20 per cent will be on public launch.’ We are definitely, consciously not only selling to the same people. All of us have bigger ambitions than that.” If being too popular is their biggest problem, they’re in a pretty good place.