Can you ever have a ‘good’ divorce?

Next week is “Good Divorce Week” (yes, there really is such a thing). It was dreamt up by the family law association, Resolution, with the aim of helping couples resolve their issues in a more constructive way, and in particular, minimise the impact on their children.

For most people — especially those going through a separation — a “good divorce” sounds like an oxymoron. Contentious splits are likely to involve a lot of wasted time, anger and money. The campaign aims to reduce the damage to families and their finances.

I’m happily married, but as the editor of the FT’s Your Questions column, I frequently receive letters and emails from readers about the financial implications of splitting from their lifetime partner. Through this correspondence I am aware of the brutal effect divorce can have on men and women, leaving them embittered and often financially insecure.

For most people, going to court is not the best way to resolve family issues. Mediation and negotiation can be cheaper, quicker and less stressful. There are other ways to facilitate a break-up such as arbitration and collaborative practice which can also keep costs down.

Figures from the Office for National Statistics (ONS) suggest that 42 per cent of all marriages in the UK end in divorce but that people are staying together for longer — the average marriage lasts for 12.2 years.

However, the cost of getting divorced is rising. Lawyers say the average UK divorce bill has risen by 17 per cent over the past three years and now stands at more than £70,000. Obviously, the wealthier you are, the higher this figure is likely to be. The average divorcee spends almost £9,000 on legal fees and will be £52,000 worse off after splitting assets and paying off debts. Maintenance payments cost the average divorcee a further £5,000 a year from salary, and they can also expect to spend £5,000 on finding alternative accommodation. 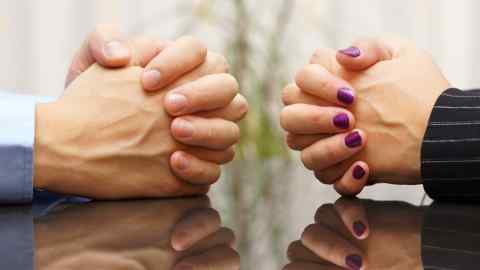 Unreasonable behaviour is the most common basis for divorce — accounting for 52 per cent of divorce petitions brought by women, and 37 per cent of those by men. However, research by the Co-op says adultery is the most common reason for divorce, followed by couples growing apart, struggling with money issues, abuse and addiction. According to Divorce Online, the online game Fortnite has been cited in a number of recent divorces on the grounds of unreasonable behaviour — perhaps another reason to ban it.

Sarah Coles, the personal finance analyst at Hargreaves Lansdown, has been researching the costs of divorce and how amicable agreements can reduce these. For starters, lawyers charge between £150 and £400 an hour, so ask yourself whether you really need their help in arguing about who gets the sofa.

Mediation can dramatically cut the cost. If you have a reasonably good and equal relationship with your ex, this brings you together in a room with a single lawyer to hammer out the details. In straightforward cases, couples can reach agreement for less than £600, though the average mediation bill is just over £2,500.

To enable this, separating couples need to keep the channels of communication open. If you struggle to speak civilly, use email or text — but never send anything you wouldn’t be happy to have read in a divorce court.

Technology can be a helpful tool for couples to distance themselves from conflict. Having a joint online calendar for parenting, for example, helps you to plan who the children are staying with, and their other activities, so this doesn’t become the source of endless arguments and negotiations.

Unsurprisingly, it is the financial settlement that causes huge stress. Those who delay providing information or attempt to hide assets will raise the temperature of the negotiations dramatically.

Ms Coles advises couples to decide their priorities when it comes to finances and matters relating to their children. “Make an active decision that if it’s an issue you don’t really care about, you’re not going to argue,” she says.

Equally, there may be some obvious no-go topics that always lead to arguments — it would be best to leave the negotiation over those to your lawyer.

Judging by the experiences of divorcing FT readers who have contacted me over the years, I would add a few tips of my own. Ensure that you have access to all joint accounts. Remember that a bad credit record can affect you both, and that if you move out of the family home, but are still named on the mortgage, you are still jointly liable for the monthly repayments.

The most distressing letters I’ve received come from older people — often women — who find themselves stuck financially following a messy divorce. The number of older couples splitting up has reached an all-time high

The most distressing letters I’ve received come from older people — often women — who find themselves stuck financially following a messy divorce. The number of older couples splitting up has reached an all-time high. Lawyers attribute this “silver splitter” phenomenon to longer life expectancy and the growing proportion of women with careers, offering the possibility of financial independence.

Other letters from the adult children of divorced parents fear “gold diggers” wanting to marry mum or dad for their money. They worry about how this could affect their inheritance, as current laws state that a marriage invalidates previous wills — even if the new spouse is not named as a beneficiary, they can (and do) collect the lot.

Following pressure from campaigners, a proposed bill to “stop putting marriages before wills” was read out in parliament this week — a much-needed change in the law that would help protect people from financial exploitation.

Divorce is never going to be “good” — but if you can use the messages behind Good Divorce Week to minimise the level of conflict in your split, it will cease to be as good for the finances of divorce lawyers.