If you think the same, join us
Legal services

The death of George Floyd, an African-American man killed by a white police officer in the US in May, was a galvanising event for law firms and their efforts to improve diversity and inclusion.

Many law firms had made strides in their diversity efforts. But interviews with senior lawyers and human resources executives reveal that the anger and dismay sparked by the circumstances of Floyd’s death has been a catalyst for deeper change. It accelerated a shift that had long been discussed but failed to materialise.

The challenge, according to longtime advocates of greater diversity at law firms, is to use the events of the past few months to drive meaningful and lasting change in an industry that is predominantly white and draws from a small pool of elite graduates.

Segun Osuntokun, managing partner at Bryan Cave Leighton Paisner’s London office, says the situation has improved since he started out in the profession almost 30 years ago. “When I trained as an associate at Wilde Sapte, there weren’t any black partners,” he says. 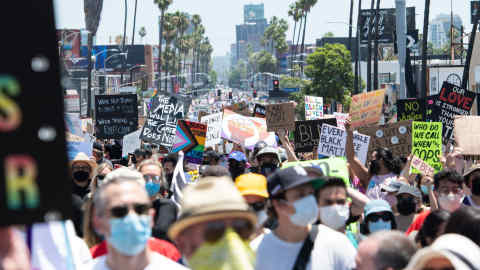 Now, there is a greater pipeline of recruits who come from black, Asian and minority ethnic (Bame) backgrounds. “We’re seeing a stronger pipeline of lawyers of colour at the junior end,” he says. “The great challenge is to sustain the numbers coming through at the junior end to see them through to be promoted as senior associates and partners.”

A survey conducted by the Solicitors Regulation Authority, the regulatory body in England and Wales, found the proportion of lawyers of Bame backgrounds had risen from 14 per cent in 2014 to 21 per cent in 2019. People of Asian background made up two-thirds of this total, with black lawyers accounting for just 3 per cent, the same proportion as in 2017.

The imbalance was worse at partner level. Only 8 per cent of partners at large firms, those with 50 or more partners, were Bame.

The data reveal a sharp split at law firms, with some success in recruitment but a lag on retention and promotion.

Ashurst has worked with recruiters to broaden its pool of potential new hires, with more than 40 per cent of its most recent graduate intake in London from Bame backgrounds (see below).

Hogan Lovells has increased its ethnic minority graduate intake from 10 per cent in 2010 to 30 per cent from 2015. Miguel Zaldivar, new global chief executive, has made diversity and inclusion one of his five priorities.

What are firms doing to improve the trajectory of newcomers up to senior associate or partner?

Constanze Ulmer-Eilfort, a member of the global executive committee at Baker McKenzie who leads the firm’s global diversity and inclusion efforts, says discussing racism openly was an important first step. When the firm published a video after Floyd’s killing in which eight black colleagues talked explicitly about everyday experiences, the stories had an impact on white colleagues. “There were so many responses from white colleagues who say they never knew. That’s why the momentum right now is key and seizing on it is so important,” she says.

Some firms are also rethinking how work is allocated. Traditionally, partners have tended to choose the associates who work on their projects — but senior lawyers have typically favoured those of a similar background.

Mr Osuntokun says BCLP is experimenting with employing a third party to operate as an adjudicator that will determine how work is allocated, rather than relying on partners to make such decisions.

But for all this tweaking, some believe a more radical rethink is required of law firms’ business model.

Moni Mannings, a former partner at Olswang and now a FTSE 100 board director, says the outlook has improved markedly since she began her law career and was the only woman of colour at her first firm. But senior levels remain “astonishingly white male”.

One reason, she says, is the partnership model, which is geared to risk aversion. “Law firms are essentially a club,” she says, with partners acting both as managers and the main earners and little external shareholder pressure for change. “Self-interest is very closely aligned to managerial interests.” In this context, difference itself is perceived as a risk.

How did she succeed in this world? “In retrospect, I realise that part of what I did — about which I’m not enormously proud — was minimise and deflect difference,” she says. “This isn’t a long-term way forward because you don’t bring your best self forward.”

Law firms have come a long way since those days but they have further work to do — if they too are to put their best selves forward.