Danh Vo: ‘If you do something for long enough, you begin to see the beauty in it’

“I can’t remember being happier in my life!” Danh Vo beams over Zoom. The Danish-Vietnamese artist is speaking of being locked down at his rural farmhouse in Guldenhof, 50km north of Berlin, where he has been gardening, splitting logs and savouring the changing seasons for the first time in 10 years.

“I have this place in the countryside where there are more than 50 different kinds of birds and thousands of plants and I only know the names of one per cent of them. It’s so fucked up — I have lived in cities for too long. Now I’ve discovered so many things outside the art world, maybe I won’t do any more exhibitions!”

Vo has brought a good dose of his new-found pastoral life to his latest exhibition at London’s White Cube Bermondsey. There is an apple tree propped up in one gallery, nasturtiums twined around fragments of ancient statuary and great plumes of salvia, sage and grasses growing in felt tubs.

Already a rewilding is afoot. Spiders have spun webs from the low-hanging lights keeping everything alive, aphids chomp on the nasturtiums and a cabbage white butterfly flits between planters. I suggest the gallery might be overrun with insects by the time the show closes. “I hope so,” Vo grins.

Adding to the Arcadian ambience, Vo has ditched the usual harsh artificial lighting. Cardboard boxes have been taped to the glass doors at the entrance, allowing a soft crepuscular light to seep through the cracks, while the warm glow of firelight emanates from one of several wood-burning stoves. Visitors speak in hushed tones, as if they have just stepped inside a chapel.

“Since cave paintings, since churches, artists have made the best out of light. Now we sit there imprisoned by gallery light. Why should we put up with that pollution?” Vo asks pointedly.

Whether by association or by material form, everything in the exhibition is linked. The logs fuelling the stoves are taken from a floor-to-ceiling installation of the Stars and Stripes, which will gradually diminish through the course of the show. By the time it closes in early November, the 13 steel stars embedded in the wood will have tumbled to the floor. The end of an era, perhaps?

Logs have also provided a focal point for Vo over the past few months — his farmhouse is heated by wood. “I’ve spent a lot of time splitting logs,” he says. “That’s the beautiful thing about life, if you just do something for long enough, you begin to see the beauty in it.”

However, the potential for cataclysm rumbles just below the surface, as the title of the show — Chicxulub — reminds us. Chicxulub is the Mexican town that gave its name to the crater formed when an asteroid crashed into the Earth 66m years ago, wiping out the dinosaurs.

Vo also provides a downloadable timeline detailing the fall of 22 empires, beginning in 330BC with Alexander the Great’s sacking of Persepolis and ending with the dropping of atomic bombs on Hiroshima and Nagasaki in 1945, marking the end of the Japanese empire. Man-made cycles of upheaval pale in comparison with mass extinction, Vo seems to suggest.

America is the latest world empire to come under threat, and the pervasiveness of US consumer culture is expressed here in crates that once transported Coca-Cola, Carnation evaporated milk and Johnnie Walker whisky all over the world. A framed reproduction print by Vo of a 16th-century painting of the Madonna and Child has the words “take my breath away” etched on the glass — a reference to the 1986 movie Top Gun, which was partly subsidised by the US government.

Much of Vo’s exhibition is also connected to his personal history. Born in 1975, just three months after the end of the war, Vo’s family fled Vietnam when the artist was four. Vo’s father collected enough money to buy a wooden boat and set sail with more than 100 others in search of a better life in the US.

The boat was spotted between Vietnam and Singapore by a Danish Maersk tanker, that took the passengers to a refugee camp in Singapore. The exhibition includes a photograph of Vo and his siblings in the camp at Christmas, shortly before they were flown to Denmark where his family settled.

Vo’s father, Phung Vo, appears in the show in the form of a letter written by a French missionary, who was about to be beheaded by the Mandarin authorities, to his own father in 1861. Since 2009, Vo’s father has transcribed the letter 1,700 times, sending it to collectors in exchange for €300 (the money is split between Vo, his father and Vo’s gallery). Vo believes the work is his greatest contribution to life. “It breaks all the rules,” he points out. “Is it an edition, is it one work? It blows up any kind of economy, it’s the same price as it was in 2009. And it breaks with my own greediness for money, it keeps me grounded.”

Phung Vo has been a devout Catholic since the Vietnam war, when he secretly converted in silent protest over the assassination of the South Vietnamese president Ngo Dinh Diem.

“That’s the reason I was forced to go to church every fucking Sunday. This is my relationship to religion, it’s totally fucking perverse,” Vo vents, before lightening: “I try to see the positive side, and now I thank God I was not raised Protestant. At least I got some beautiful imagery on the way.”

Vo is less upbeat about the possibility of Donald Trump being removed from office. It is no coincidence the exhibition ends on November 2, the eve of the US election, when Vo is planning some sort of happening. He refuses to be drawn on details, except to say: “It’s going to be one of the most anxious days of my life. I want to make a finissage that’s going to be so horrible to experience.”

And if Trump wins? Vo believes we have to expand our horizons and look beyond recent human history, to geological time. “I find comfort in that. Either that, or I am going to turn to religion, or join the Chinese Army as a spy.” 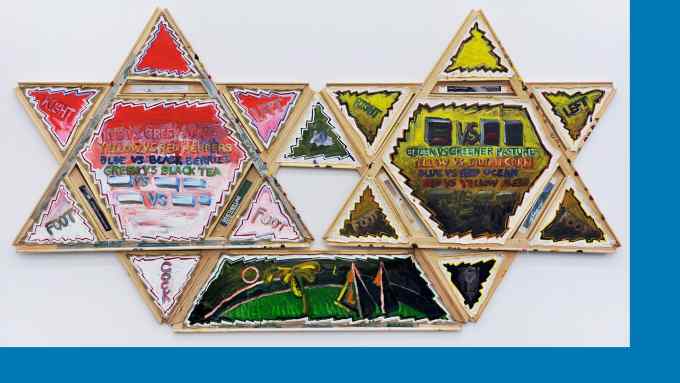