The Brazilian forestry giant striking a blow for sustainability

For a company that makes billions of dollars from cutting down and pulping trees in Brazil, Suzano has a surprising following among some environmentalists.

SOS Mata Atlântica, another environmental group, describes both Suzano and its Brazilian sector peers as models. The company also features on the registry of organisations that have committed to advance the UN’s sustainable development goals.

The explanation for this apparent contradiction is that Suzano uses only sustainably grown wood from eucalyptus plantations. One of the world’s biggest pulp and paper companies, it has also set aside a vast area of natural forest, some 900,000 hectares, for permanent conservation, and is reforesting thousands of hectares more, a task in which it is partnering with WWF Brazil.

Some environmentalists, however, still argue that plantations growing one species of tree to make single-use products are not a sound model. They claim the result is reduced biodiversity, high water consumption and soil erosion, and say such plantations are poor carbon sinks compared with native forests. The Global Forest Coalition, an alliance of campaign groups, believes that planted forests should be excluded from the definition of forests and denied climate finance.

Proponents counter that as long as the world needs toilet tissue, paper and disposable nappies, there will be a demand for pulp and paper, which is much better satisfied by sustainably grown wood than by unlicensed timber of dubious provenance.

Suzano has a strict zero deforestation policy and Walter Schalka, its chief executive, has been among Brazil’s most outspoken business leaders in calling for a halt to illegal logging in the Amazon and in promoting sustainable development.

Every piece of wood that crosses our gates has a control on it. We know where it comes from and who is behind it

Mr Schalka touts his business as “part of the solution [to] greenhouse gas emissions”. While he acknowledges the key role of natural forests in combating global warming, he also argues that “planted forest is going to be part of the long-term solution to the targets we have in the Paris agreement [on climate change]”.

The Brazilian company is setting trends in green finance too. Earlier this month, it became the first emerging market company to issue a bond that specified an interest rate penalty if it fails to meet a five-year target for reducing the intensity of its carbon emissions.

Brazil’s paper and pulp industry has not always been exemplary.

Mario Mantovani, director of public policy at SOS Mata Atlântica, recalls how he was “the greatest scourge” of Suzano in the 1980s. At that time he campaigned against the company, which, like its peers, took advantage of tax incentives to create plantations in areas formerly occupied by natural forest.

“The companies always followed the law,” Mr Mantovani says, “but it was a damaging law.” Suzano says that incentives for planting, not deforestation, existed in Brazil more than three decades ago, before the Rio de Janeiro Earth Summit in 1992 and the strengthening of environmental regulation.

Things changed with Brazil’s adoption of ever-tighter environmental laws during the 1990s and early 2000s, and the birth of the global Forest Stewardship Council in 1993, which set standards for sustainable forestry.

“These companies completely changed their behaviour with the FSC,” Mr Mantovani says. “We’re talking about another universe. . . the cellulose sector is a paradise now compared to what I faced then”.

Today, tracing the origin of forest products back to their source to ensure that they have not come from areas deforested after 1994 is a key part of Suzano’s strategy for complying with FSC standards and international best practice.

“We have very rigid controls in place,” says Maria Luiza de Oliveira Pinto e Paiva, executive officer for sustainability. “Every piece of wood that crosses our gates into our mills has a control on it. We know where it comes from and who is behind it.”

The company has offered its tracing technology to Brazil’s beef and soya producers, who are under heavy pressure to show they are not buying from recently deforested land. “Of course for us it’s easier, because you cannot move trees but you can move cattle,” says Mr Schalka. “But it’s not very difficult to do it.”

Another key element in the sustainability strategy is Suzano’s “mosaic system” of planting, which intersperses preserved native forest with plantations, which in turn grow genetically varied eucalyptus. The aim is to ensure a balanced ecosystem, which allows flora and fauna to move freely, and thus encourages biodiversity.

“We have to preserve the native forest,” says Fernando de Lellis Garcia Bertolucci, chief technology officer. “The ecosystem is the key in our forest planning.” He explains that mosaic planting encourages natural controls on tree pests and diseases and helps conserve the water supply. The company says its scientific research demonstrates that eucalyptus growing under its forestry model does not compromise the natural water supply.

Suzano’s definition of sustainable business goes beyond forest conservation. The company joined the UN’s corporate sustainability initiative in 2003, committing to the broader goals of reducing poverty and inequality, redressing gender imbalance and fighting climate change. Its environmental, social and governance targets include bringing 200,000 people out of poverty in the next decade and raising the standard of education in areas where it operates.

Yet the company still has its critics. The Environmental Paper Network (EPN), an umbrella grouping of non-profit organisations, published a report in 2019 questioning its carbon capture figures. EPN argued that when the plantations of eucalyptus trees are harvested after seven years, most of the carbon they have sequestered is released again.

Mr Schalka agrees that some carbon is released when the trees are cut down, but not all of it; he says the business is “very confident” in its calculations showing that overall its operations contribute to a net reduction in carbon dioxide emissions and adds that the EPN calculations do not take account of the large native forest area that Suzano preserves.

Campaigners also argue that single-use paper products are inherently unsustainable and say efforts should be made to reduce the consumption of tissues and printed matter, to increase the proportion of recycled fibres in paper, and to cut the use of chemicals and the emission of greenhouse gases during production.

Suzano says it has set sustainability targets to remove an additional 40m tonnes of CO2 from the atmosphere, to increase supplies of renewable energy to the Brazilian national grid by 50 per cent, and to offer 10m tonnes of renewable forest products that can substitute for plastic and petroleum derivatives, all by 2030.

Addressing environmental concerns is becoming more and more important at a time when investors are increasingly demanding that companies demonstrate commitment to sustainability. Some large investors are shunning Brazil’s meat companies because of deforestation concerns, and a sharp rise in Amazon fires since President Jair Bolsonaro came to power has led to worries that even the greener Brazilian companies may be caught in boycotts.

In July, Mr Schalka joined several dozen Brazilian chief executives in writing to the government’s Amazon Council, led by vice-president Hamilton Mourão, to demand comprehensive action to fight illegal deforestation. Mr Schalka argues that his vast country does not need to expand its planted area to increase agricultural production and should instead boost productivity and improve logistics.

Mr Garcia Bertolucci says Suzano has roughly doubled productivity on its plantations over the past decades to 12 tonnes of pulp per hectare per year and has cut its water use and use of harmful chemicals in processing.

The company is also committed to finding new sustainable uses for its wood. When trees are processed, they are separated into pulp, which is used to make paper, and lignin. The latter has generally been burned in power stations but the company is researching its use in resins, thermoplastics and even carbon fibre.

Perhaps the most eye-catching future use it sees for its trees is to make fabric for clothing, using a type of cellulose extracted from the wood.

It has a partnership with a Finnish startup called Spinnova to develop fluffy, wool-like fibres that can be produced mechanically from pulp without the need for chemicals — a process, Suzano says, that requires far less water than cotton production.

Welcome to a future of wooden T-shirts.

Video: How to put a price on nature

READ MOREInvesting in Nature
Video: how to put a price on nature 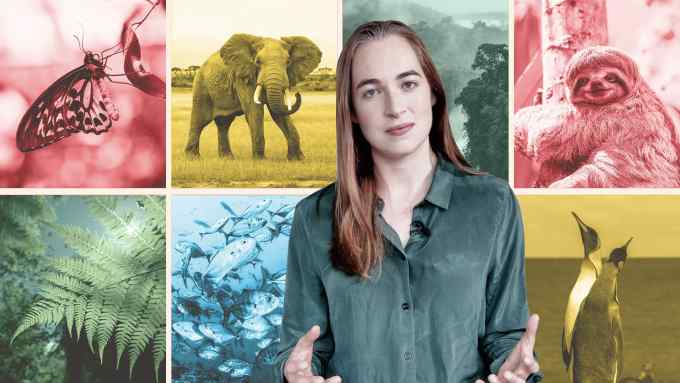