If you think the same, join us
How To Spend It Menswear

When Emily Adams Bode describes the aesthetic of her eponymous menswear label as “quite boyish”, she’s talking about the silhouettes. But it’s not the boxy, workwear-inspired shapes that first grab the attention; it’s the fabrics. Well-worn patchwork quilts become jackets and trousers; an embroidered tablecloth or an antique piece of lace are rethought as Bode’s bestselling, signature Cuban-collared shirts.

“My goal was to make timeless men’s clothes inspired by female craft,” says the 31-year-old Atlanta-born designer whose take on vintage repurposing is swiftly attracting a loyal fanbase. “My favourite boys…” ponders Bode. “There are so many. Donald Glover. Jeremy O Harris. Harry Styles. They’re all really supportive.” The subsequent headlines – along the lines of “Zayn Malik Shows Off his Big Bode Energy with Gigi Hadid” – are bringing the brand to a wide audience.

How To Spend It
How upcycling became fashionable 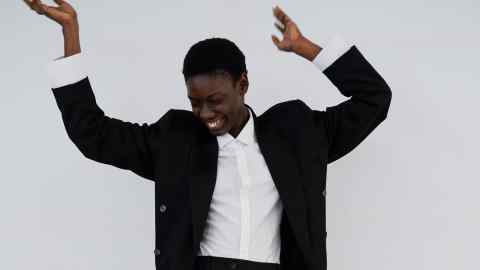 But, pop appreciation from former One Direction stars aside, Bode (pronounced boh-dee) is driven by a commitment to craftsmanship. Of her use of vintage fabrics, she says, “It’s just what felt natural for me. It was partly strategic, partly just, ‘I’m just going to do this and hope that it works.’ I didn’t necessarily set out to create a sustainable company.” Bode’s first collection in 2016, however, was created entirely in New York and was 100 per cent upcycled. “We try only to use fabrics that are too distressed to keep in the home,” she says. “We invest time and effort into preserving and mending pieces with stains or holes or cigarette burns.”

The resulting pieces of clothing are labelled with details of the original fabric – where and when it was made and, where possible, by whom. Bode has even created a digital archive in partnership with Microsoft, logging the historic quilts she uses so that the AI-driven software can identify pattern styles, dates and regions. She keeps the pieces that are too special to cut. It’s a process that honours folk art, capturing the creative, and often overlooked, output of communities and cottage industries. “For autumn/winter 2020, I referenced ideas of self-taught artists and craft communities – such as the American Shakers and the Swiss Appenzellers, who are famous for their metal charms,” says Bode. “My passion is retelling and documenting these personal narratives and aiding the preservation of craft and historical techniques.”

Hunting out antiques is a habit Bode latched onto while growing up, when her mother and aunts would take her to fairs and markets in Atlanta and Cape Cod. By the time she moved to New York to study fashion at Parsons, she had built up a significant stash of pre-loved materials that she would use as her “muslin” – the first sample of a design. After work experience at Marc Jacobs and Ralph Lauren, she struck out on her own four years ago. “I was always so surprised that no one had created a brand like this. Of course, there are tons of brands that use vintage fabrics, but no one believed that you could create a scalable business – and that’s why it had never taken off.”

And Bode has certainly taken off. In 2017, Bode was the first female designer to show at New York Fashion Week: Men’s. Her offbeat, homespun collection – shown within a stage-like setup of a Cape Cod home – caused an immediate stir, with buyers staking their claim to buy pieces on the spot. Today, she has some 120 stockists, a confirmed slot at Paris Fashion Week and a flagship boutique in New York’s Chinatown.

With commercial growth (300 per cent from 2019 to 2020), however, comes change to Bode’s business model. Vintage fabrics are sourced via a network of dealers across the US, Europe and India, but, crucially, not all of her range is constructed from second-hand finds. “Today, about 40 per cent of the collection is one-of-a-kind,” she explains. “A lot of the time, the original, vintage pieces become the inspiration for a larger run. It’s a very different way of designing than ‘this cloth becomes this shirt’. We use reproduced fabrics, which means we can be imaginative and creative with different colourways. And we do quite small runs of each, so it still feels intimate.”

Production is managed so that sustainability standards are still met. This season, 50 per cent of the collection was manufactured in New York, 30 per cent in India and 20 per cent in Peru. From a design perspective, Bode’s autumn offering is a colourful slice of Americana with shades of Wes Anderson in its playful combination of patchwork, varsity-style appliqué and abundance of old-school patches. “The collection is called The Education of Benjamin Bloomstein,” she says. “It follows my dear friend, who is a self-taught artist and furniture maker focusing much of his craft on reuse of rare and found wood through sculptural, primitive, natural shapes.” Bode’s choice of fabrics is still often the main event. One particularly striking orange shirt is constructed from pieces of silks originally used to bundle cigars, imitating an intricate Victorian-style quilt, while coats are hewn from equine blankets.

Working with wool is a new focus for Bode, who won the Karl Lagerfeld Award for Innovation at the International Woolmark Prize ceremony earlier this year. “Woolmark gave us the chance to invest in our knitwear and outerwear, and from a business perspective it has been extremely successful,” she says. “We sell more shirts than anything else, but the bestselling piece this season was a merino-wool felt jacket mimicking the souvenir felt pennant quilts from the early 1900s.”

As to what comes next in a challenging climate, Bode’s keen to keep up momentum – “because as soon as that stops you affect hundreds of people down the line, especially the sewers and the craftspeople”. She didn’t show at Paris in July, however, and doesn’t currently have a date for a new collection. “As an American designer, I think it is really important to focus our platform now on other things happening in the world,” she says, adding that recent events have also turned her attention to online sales. “Ecommerce only made up about six per cent of our business – and that’s of course crazy for a brand in 2020.” A new online store was shot on Bode’s iPhone and launched in May from her fiancé’s parents’ greenhouse on Vancouver Island.

“It actually worked out quite well,” she shrugs. “It’s been a huge learning curve for me to delegate and allow other people to do things, then with this I’ve had to do everything myself again.” The DIY approach is in keeping with Bode’s aesthetic. The not-too-polished, make-do-and-mend vibe feels timely – craft techniques and patchwork in particular have been a recent favourite with fashion labels from Calvin Klein to Junya Watanabe. “In some ways, it’s great to be grouped into this fashion narrative, but patchwork isn’t a trend for me,” says Bode. “I think that what we are doing is different. If, say, ditsy florals became a trend, Liberty would get grouped into it. But Liberty fabrics are so beyond just a ditsy floral trend.” It’s unlikely to be a century and a half before this savvy designer achieves a similar status.