Is the era of the mega-museum in the Arabian Gulf coming to an end? Over the last 15 years, Qatar and the United Arab Emirates have spent vast amounts of money to erect headline-worthy museums such as the National Museum of Qatar and Louvre Abu Dhabi, both designed by French architect Jean Nouvel.

Now, however, there is a growing emphasis in the region on initiatives that encourage creativity and the production of art, such as art districts.

“It’s time to reinvent museums as active spaces of thinking as well as looking,” says Antonia Carver, director of the eponymous Arab foundation that runs the Jameel Arts Centre in Dubai and is building a multidisciplinary arts complex in the Saudi city of Jeddah.

“These sites of knowledge production and debate are even more acutely needed and possible in the Gulf, where there is everything to play for in forming and nurturing community amid a broader geopolitical context that is so turbulent.”

Abu Dhabi, for example, has long-standing plans to redevelop its working port, Al Mina, into an arts area. The latest addition to Doha’s cultural circuit will be M7, a start-up hub to develop careers in the creative fields including technology, design and fashion.

Some spending on museums is continuing in Saudi Arabia, including a modern art museum and a Black Gold Museum. The latter, devoted to the history of oil in the kingdom, is slated to open in Riyadh in 2022.

Cultural development is also part of . . . strategy to give economic opportunity and entertainment to a youthful population

But numerous stakeholders in the nascent arts scene are also focused on building an infrastructure and an audience for creative disciplines — none of which were publicly supported until 2016, when Crown Prince Mohammed bin Salman began his suite of social and economic reforms.

“We are committed to expanding the creative sector in Saudi Arabia,” says Reem Al Sultan, the CEO of Misk Art Institute, Prince Mohammed’s private art foundation. “Among our numerous strategic objectives is a focus on supporting artists in the kingdom and the region through educational programmes, exhibitions and grants as well as initiatives that engage the public.”

The idea of art in the public realm is key to many of the new projects, such as Riyadh Art, a “museum without walls”, to be launched early next year with the installation of an ambitious number of artworks throughout the city. The programme is run by the Royal Commission for Riyadh City, a government department for the capital’s development.

While museums were used by Qatar and the UAE to project themselves on the world stage, cultural development is also part of Saudi Arabia’s Vision 2030 strategy to give economic opportunity and entertainment to a youthful population after 40 years of severe social restrictions.

The focus on the grassroots also recognises an extensive Saudi cultural scene, notes Myrna Ayad, a Dubai-based cultural strategist. “The kingdom is placing priority on local talent and investing first in the Saudi community,” she says.

Others, however, privately worry about the effects of government-led spending on the country’s homegrown art scene, which is shifting from being neglected to playing a role in projecting Saudi soft power.

The scale of the initiatives is setting the industry on turbospeed, and some independent initiatives are looking to the experience of their neighbours, which similarly weathered a transition from local to international art scenes. For Art Jameel, which is building the cultural complex Hayy: Creative Hub, one focus is on developing Arabic language programmes and creating continuity with earlier generations by including them in new initiatives.

“In the UAE, when the new art era started in the 2000s, it almost closed the door on the previous one, which tended to be pan-Arab, neo-Nasserist,” says Ms Carver, referring to the 20th-century Egyptian president Gamal Abdel Nasser who sought to promote pan-Arab unity. “The two became distinct from each other. Now in Saudi, [there are] discussions around how you move forward... The older artists think in Arabic and relate to a certain way of speaking about art and its place in society alongside traditional poetry and theatre. And a lot of the younger artists really look up to them and engage with them.”

Saudi Arabia’s divergence from Abu Dhabi’s strategy of collaborations with the Louvre, the British Museum and the Guggenheim, might also be a matter of necessity. The country’s poor human rights record and restrictive policies on women, gay rights, and free speech have turned many potential international cultural partners away, particularly after the killing of the journalist Jamal Khashoggi.

International Saudi collaborations tend to be with governments: one example is Afalula, a partnership between the French and the Saudi governments for the redevelopment of the AlUla area — home to the country’s first Unesco world heritage site, the archaeological wonder known as Hegra. International expertise also tends to come behind the scenes, in the form of the large-scale engagement of consultants.

Arts districts and festivals are also cheaper to develop — a plus for Gulf nations whose economies are suffering from low oil prices. The latest IMF forecasts are for the UAE’s GDP to shrink by 6.6 per cent in 2020 and for Qatar’s to shrink by 4.5 per cent.

Ambitious plans announced in 2019 by the local culture and arts authority to make Dubai into a “world class cultural center”, including new museums and long-term visas for non-Emirati artists who want to work in the emirate, have been scaled back.

At the same time, other cultural projects are going ahead as part of a longer-term imperative to diversify oil-dependent economies.

Indeed, Jean Nouvel’s next building in the Gulf will be in the AlUla valley. But, in a bellwether of shifting winds, it will not be a museum — rather a luxury resort. 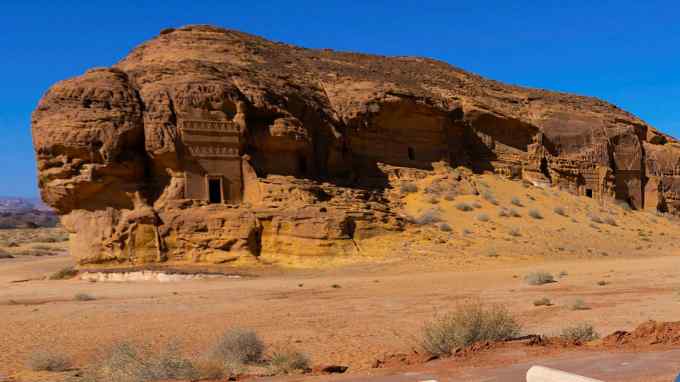