Do these cans by the Cupertino giant compete?

When Apple launched the iPod in October 2001, it was immediately obvious that music listening would never be the same again. As Steve Jobs put it, you could now carry 1,000 songs in your pocket – the equivalent of around 100 Walkman cassettes in old auditory money. Today, your iPhone can put millions of songs in your pocket.

And yet despite bringing music on the hoof to hundreds of millions, Apple has never seemed to be that bothered about truly great sound quality. Its white earphones were a branding masterstroke but they sounded fine, if slightly average. Its wireless AirPods, which appeared in 2016, and AirPods Pro just over a year ago, were much, much better, but looked – and still look – a bit silly, as if you’ve accidentally left a cotton bud in both ears.

As far as over-ear headphones go, Apple has always left it to third-party makers, such as Sennheiser in Germany, Bowers & Wilkins in the UK, Sony in Japan and Bose and Master & Dynamic in the States, who have all done wonders. Now, however, Apple has brought out its own over-ear headphones – and, even though, at £549, they’re at the very high-end price-wise for consumer (as opposed to professional) cans, I suspect they’re going to rip apart the top of the headphone market. The AirPods Max are startlingly beautiful, engineered to a scintillating standard, a good deal more comfortable than most competitors, and innovative in both practical and geeky ways. The sound is wonderfully loud and beefy, smooth, dignified and deep. My only quibble being that the bass is so massive that it’s a bit too much for me.

The sound is wonderfully loud and beefy, smooth, dignified and deep

Aesthetically, the most startling thing about the AirPods Max is the case – a strange, minimalist receptacle that protects the earcups but leaves the headband protruding as a handle. It’s clever, but a selection of people I’ve shown it to have said it looks like a) a lady’s evening bag, b) a bra and c) a rather fit gentleman’s bottom.

In an online chat the other day with the key members of the design team overseen by Sir Jony Ive until his departure last year, I mentioned that the handbag look was interesting because it recalls the classic British Roberts transistor portable radio designed in 1956 by Harry Roberts, and inspired by his wife’s handbag. They were polite, but didn’t elaborate and were more “excited” (Apple speak for proud) about two other key innovations.

First is an extraordinary spatial sound effect. If you’re watching a film sourced from Apple TV on your iPad (or phone) and it’s one of the not many yet with a Dolby Atmos soundtrack, the AirPods Max reproduce the effect of being in the cinema. If you turn your head this way or that, the sound changes just as if you’re in your seat and moving around. This might seem imperceptible, but is kind of mind-blowing. The film doesn’t have to be in Dolby Atmos, but the effect is best heard that way. 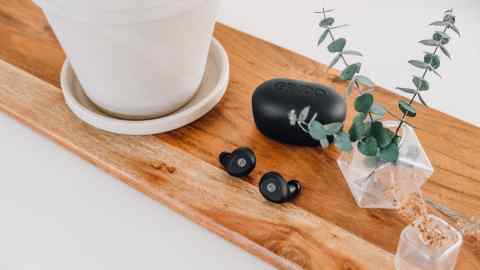 The other, less arcane innovation is having a rotary knob volume control. Stylistically, it’s a giant version of the digital crown on the Apple Watch. The important thing is that it makes turning the volume up or down without touching your phone delightfully easy. Another thing I should say – the headphones have the best noise cancelling I’ve ever heard – you can easily use them sans music just as ear muffs.

AirPods Max are going to be the gold standard for posh headphones for non-geeks, even if there are plenty of more specialist brands that technically have a finer edge. They are a buy you are unlikely ever to regret and will love for a very long time.