Is the US on the verge of an infrastructure boom?

From roads to bridges to broadband, Biden wants to build a post-pandemic US recovery

Sign up to myFT Daily Digest to be the first to know about Infrastructure investment news.

Republicans and Democrats in the US Congress agree on few things, but they concur on one issue: the poor state of America’s infrastructure, from roads and bridges to electricity grids, public transit and broadband.

A report released this month by the American Society of Civil Engineers gave the country’s infrastructure a grade of C-, lifting it from the D range for the first time in 20 years. But the report warned that “the COVID-19 pandemic’s impacts on infrastructure revenue streams threaten to derail the modest progress we’ve made over the past four years”.

Last month, President Joe Biden warned that unless the US makes significant improvements in infrastructure, it risks falling behind China which could, in his words, “eat our lunch”.

“They’re investing billions of dollars dealing with a whole range of issues that relate to transportation, the environment and . . . other things,” he said. “We just have to step up.”

Many US roads, bridges, ports, and water supply systems were built in the 1950s and 1960s, so they are outdated and in need of replacement. On that, deeply divided Republicans and Democrats can easily agree. However, they are squaring up for a fight over who will pay for it.

Biden has made it clear that fixing America’s infrastructure is a priority for his new administration, now that his initial Covid-19 relief bill has made it through Congress.

On the campaign trail last year, Biden proposed spending $2tn over four years to fix highways, bridges and airports, build greener homes, expand broadband, and encourage electric car use with a charging network to serve them.

But, since entering the White House, he has given no details of exactly how this infrastructure spending will be organised, or how he will finance it.

$2trn The amount Biden pledged to spend on infrastructure

His predecessor, President Trump, came into office in 2017 also promising an infrastructure boom and a rejuvenation of crumbling roads, ports and bridges. Little came of it. Experts on congressional politics say the same fate could await Biden’s infrastructure ambitions, with fundamental disagreements between the two sides over what counts as infrastructure — not to mention whether or not to raise taxes to pay for it.

Some believe Biden may try to move an infrastructure plan through Congress via the budget reconciliation process, a parliamentary procedure that may allow him to get legislation through without significant Republican support.

But many large institutional investors are dubious about whether a big infrastructure package will get through Congress, says Stephen Volkmann, machinery and industrials analyst at Jefferies, the investment bank. “Everybody feels like ‘we’ve seen this movie before’, we’ve been at the starting line waiting for that gun to go off and they keep cancelling the meet,” he explains. “There’s a fair amount of scepticism that we will get anything really meaningful.”

One problem is that Democrats have a much broader definition of infrastructure than the Republicans, says Volkmann. “So they put through a big plan that includes broadband and public transit, while the Republicans think of roads and bridges,” he points out. “That’s part of the reason they can’t agree on things.”

But industrials analyst Mig Dobre, at investment manager Baird, thinks the circumstances are different today from when efforts were made to pass infrastructure legislation in the past.

“What feels different this time is where we are in the economic cycle,” he says. “We are trying to recover from an economic recession unlike anything that we have seen before, I think there’s a different willingness to consider the role of government in stimulating economic growth especially on something that makes structural sense like infrastructure.”

An infrastructure package could catalyse a building-materials supercycle, similar to what we saw back in the 1950s

If a significant infrastructure funding bill were to pass Congress, “quite a few American manufacturing and industrial companies would benefit”, he says — citing Caterpillar and John Deere because of incremental demand for their construction equipment.

He also cites smaller companies, such as road building machinery maker Astec Industries and crane manufacturer Manitowoc, “especially if you’re going to do a lot of bridge maintenance work”.

“But it’s not just machinery companies,” he adds, noting that businesses such as Eaton Corporation — the power management company — could benefit if there is increased investment in electric infrastructure or electric car charging stations.

Courtney Yakavonis, US machinery analyst at banking group Morgan Stanley, suggests an infrastructure programme could “catalyse a building-materials supercycle, similar to what we saw back in the 1950s” — the heyday of US road building. She predicts a boom for aggregates companies that provide materials for road building, such as Vulcan Materials and Summit Materials as well as Martin Marietta.

A recent Morgan Stanley report, titled “Paving the way for US Infrastructure Super Cycle” found that protecting US cities from global warming could require supplies of cement and aggregates over and above that needed for repairs to roads and bridges.

In the transport sector, she includes not just electric carmakers but also companies such as Cummins, which is working on electric buses.

At the same time, construction and engineering companies can get in on the work of upgrading the electrical grid and expanding the 5G network.

So, is the US on the verge of another quantum leap on infrastructure, as in the 1950s? Not quite — or not yet. “The need for something like that might be there but I don’t think it will be on that level of magnitude,” cautions Vermillion. “Especially with the pandemic — I think people aren’t going to vote for something that dramatic”.

Get alerts on Infrastructure investment when a new story is published

Explore the Special Report
READ MORE
Michigan: a tale of US neglect 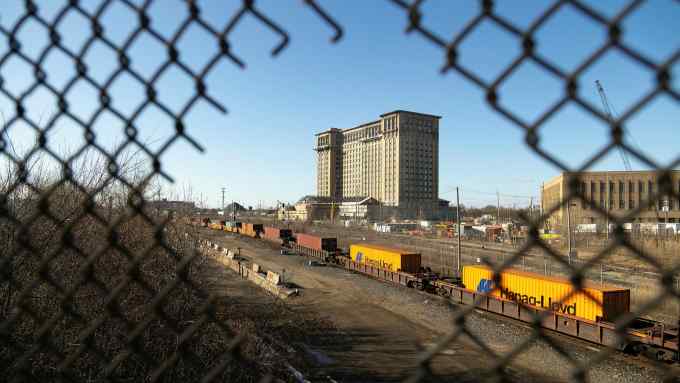