If you think the same, join us
Latest news on ETFs
See all 340 stories
Retail trading

Silver prices raced to the highest level since 2013 after retail traders targeted the market for the precious metal following last week’s successful attack against funds betting against retailer GameStop.

Prices for silver rose as much as 11 per cent to $30 per ounce on Monday in London, leaving the metal on course for its biggest one-day percentage gain since 2008. That followed a 6 per cent jump last week and a rally in the shares of some miners of the precious metal.

The world’s largest silver-backed exchange traded fund, the iShares Silver Trust, recorded almost $1bn in inflows on Friday, according to data from BlackRock, the fund’s sponsor.

The jolt of investments came as the subject percolated late last week on Reddit’s r/WallStreetBets forum. One post urged people to buy shares and options to put a squeeze on banks.

The surge in the silver price on Monday, however, prompted a backlash among some members of the board who speculated that institutions such as hedge funds were attempting to tap into the retail fervour that has sent stocks such as GameStop and AMC flying higher in recent trading days.

“It's a fool’s errand, it's financial anarchy; somebody is going to get hurt,” said Ross Norman, a veteran precious metals trader.

Analysts said the move higher was likely triggered by retail investors as there were also reports of a shortage of silver bars. Ken Lewis, chief executive of the US precious metals retailer Apmex, said at the weekend that the company had been forced to stop selling silver due to a surge in demand.

“Once markets closed on Friday, we saw demand hit as much as six times a typical business day and more than 12 times a normal weekend day,” he said. “Combined with the extremely high demand levels, we are also seeing a surge in new customers.”

The iShares Silver Trust was among the top six most-traded equity securities among retail investors on Friday, according to VandaTrack, which collates data from US brokerages.

A user named TheHappyHawaiian last week said buying shares in the ETF would “force physical delivery of silver” into the fund’s vaults, thereby causing a “short squeeze” on the market, pushing up the silver price.

The user wrote on the forum that it would be “incredible” to make large banks active in the futures market “pay dearly” for what he alleged were bets that the silver price will fall. The rallying call echoed that of other r/WallStreetBets users who last week cheered their success in triggering large losses at Melvin Capital and other hedge funds.

The 37.05m increase in the number of shares of the iShares Silver Trust on Friday was the biggest one-day rise since the ETF started trading in April 2006, data from BlackRock showed. The ETF is backed by physical silver held in vaults, meaning it needs to purchase the precious metal when it receives new investments.

“To put this in context, [these inflows represent a] value of $950m in a total annual silver market size of $25bn, so is equivalent to two weeks of demand simply from ETFs in a single day,” said Colin Hamilton, analyst at BMO Capital Markets.

Shares in silver miners also rose on Monday, with London-listed Fresnillo up as much as 21 per cent and Hochschild Mining climbing more than 18 per cent.

The rush in to silver was reminiscent of a similar effort by oil barons William Herbert Hunt and Nelson Bunker Hunt, known as the Hunt brothers, who in 1979-80 bought billions of dollars worth of the metal in an attempt to corner the market. They were later sanctioned for market manipulation and went bankrupt after the silver price collapsed in an event dubbed “Silver Thursday.”

Analysts said it would be more difficult for retail investors to have a sizeable impact on the silver price, given the large off-exchange market for the precious metal, where banks trade on behalf of clients.

There was also not a single visible short position to target as there was in the case of GameStop, said Philip Newman, managing director at consultancy Metals Focus.

“There are shorts and some may close their position but is there that smoking gun they’re looking for? I don’t see it,” he said.

In addition, there were ample stocks of silver in warehouses on the CME Group’s futures exchange, available for delivery if those short silver closed their positions, he added.

Still, a supply squeeze could have real-word implications given that silver — unlike gold — has a number of industrial usages such as in photovoltaic cells used in solar appliances.

About $6bn worth of silver traded hands in the silver market in November, according to the latest statistics from the London Bullion Market Association. London’s vaults hold about 33,475 tonnes of silver, valued at $23.8bn, they said in January.

Mr Norman said the Reddit user’s post targeting large banks was misplaced, since the lenders used futures contracts to hedge their physical holdings of silver, meaning they were not speculating on the price falling.

“There is a misnomer here that banks are constantly running short positions, but from a price perspective they are neutral, they have a long and a short that cancels each other out,” he said.

Additional reporting by Neil Hume and Chris Flood in London

Explore the series
READ MORELatest news on ETFs
What is a buffered ETF? 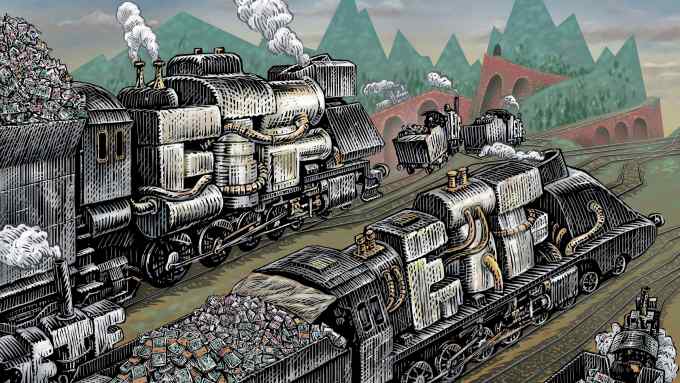