An elite top tier of 13 high-scoring Executive MBA programmes head the FT’s 2020 EMBA ranking, led by a partnership between Kellogg School of Management and Hong Kong University of Science and Technology. The ranking is published against a backdrop of continuing demand despite the pandemic.

The leading providers, most of which offered training split between campuses in Asia and Europe or the US, scored significantly above the average for the 100 ranked business schools. They were assessed on factors including salaries and increase in pay three years after graduation.

The analysis shows the rising importance of Chinese institutions and others from emerging markets, with — lower in the rankings — two schools each from India, Russia and Turkey and one from South Africa.

Covid-19 has caused significant disruption to business education, with potential students often struggling to travel or devote time to training. Rising unemployment caused by lockdowns has encouraged some people to seek retraining, but many of these are enrolling on full-time courses and taking a career break rather than juggling work and study as an EMBA requires.

Although executive MBA providers are not generally reporting the high double-digit percentage increases in applications for many full-time MBA programmes this year, many business schools say demand for EMBAs has risen slightly.

$226,436 Average salary of EMBA graduates who completed an FT survey

The FT ranking, based on data collected over the summer, shows that salaries three years after graduating from the 100 participating schools rose slightly from an average of $222,780 last year to $226,436.

In a sign of continued optimism about demand, schools surveyed over the summer reported that the number of applications held firm compared with 2019. Nearly two-thirds of alumni said they valued the EMBA and would continue to recommend that others study for the qualification.

Graduates from the FT’s “Tier I” top-ranked EMBA programmes reported the highest salaries and salary increases, and had studied typically on courses with a higher proportion of international students and faculty than the lower tiers. 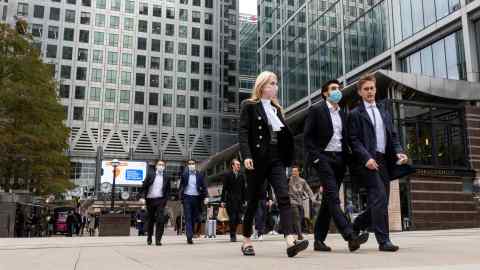 While some business schools declined to participate in the rankings, all 100 which made the final list offered strong courses and are approved by at least one leading accreditation agency.

However, alumni of the second and third tiers in the ranking participated in programmes that rated better for career progression and strength of faculty research, and their classes also had a greater share of female participants.

The largest single employment sector for EMBA alumni was in industry, followed by finance, IT, healthcare and consulting.

Get alerts on Executive MBA when a new story is published