Travel adventures to the edge of the world

Where to get (really) away from it all, in Morocco, Chile, Lapland and New Zealand

All stations go in New Zealand

Flock Hill Station was founded in 1857, deep in the Southern Alps of New Zealand’s South Island. This incredibly scenic, rugged part of the country has stood in for Narnia on the big screen, and it’s easy to understand why; no need to blur out traces of modern civilisation in post-production, when there are hardly any, amid the 36,000 acres of massifs and river beds and miles of wild pasture.

Next month the station’s owners will begin welcoming guests to The Flockhill Homestead, a new four-bedroom, glass-and-timber lodge that’s deep in the station’s empty part, a 20-minute drive from the Great Alpine Highway – already one of the country’s most idyllic roads. All things Active New Zealand are on offer, from bouldering to fly fishing (not one but two of the island’s primary salmon-spawning streams flow through the property) to night-sky viewing. Alpine-glacier picnics, yes; helicopters to reach them, of course. Skiing and fleecing (in season): sign us up. From NZ$12,000 (about £6,200), flockhillnz.com

In northern Lapland, a logger’s delight

“Welcome to life at 66 degrees north” is the tagline of Loggers Lodge, set at that blissfully solitary latitude in the far north of Swedish Lapland. The cabin, on two acres of private land, was originally built in the 19th century to house itinerant workers transporting logs downstream to the sawmills on the coast. From the outside it’s much as it was then: cheery red paint, white gables and chimney. Inside, a recent renovation has brought it very much up to 21st-century scratch: the bedroom, dominated by a central fireplace, still has its timber walls and pitched roofs, but the space has been extended, and a large and very indulgent bathroom added, all black granite and high-tech shower. It’s connected to a new sauna, housed in its own little cabin.

And the good news for families, friends and couples travelling together: a second, standalone bedroom has been constructed – a contemporary cuboid of thermo-ash cladding and glass walls, with its own sitting area, configurable to sleep adults or children. No light, no pollution, and endless silence come with the package. From £3,900 for two nights, loggerslodge.com

Casting away in Chilean Patagonia

Chilean Patagonia is some of the southern hemisphere’s greatest Great Outdoors; Eleven, the US-based elite adventure outfitters, has been operating here for years, so knows the lie of the land. Its newest offering, launching this autumn, is a week-long angling trip that leverages a pair of lodges in the wilderness south-east of Chaitén known as Martin Pescador, which between them provide access to two separate watersheds where the trout fishing is world-renowned.

At Puerto Cárdenas, guests stay in private cabins with out-the-door boat access to top spots Río Yelcho and Lago Yelcho; La Junta, further south, is a traditional lodge with five bedrooms and angling; there are world-class rainbows and brown trout in abundance (the odd salmon too). From $7,612 for seven nights, elevenexperience.com

If you want to draw real magic from remote coordinates, it pays to entrust your journey to a professional magic-maker. In Morocco, that person has long been Thierry Teyssier, the sometime events planner, theatre producer and owner of Dar Ahlam, the extraordinary hotel in the Skoura Oasis which remains a benchmark of atmosphere and elegance almost 20 years after it first opened. In 2015 he created the Route de la Memoire, a six-day, on- and off-road odyssey that mines the country’s spectacular south for its emptiest, most alluring corners. He scouted the route for years, finding ancient houses in hidden oases and mountain-top villages along its close to 1,000 kilometres; these have been converted into gorgeous, fully-provisioned guest accommodations. 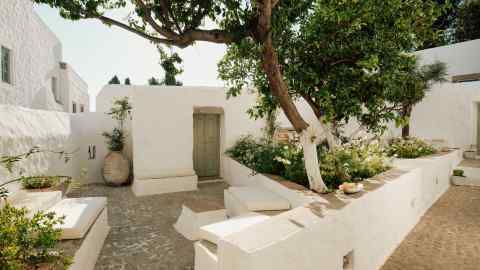 Days are characterised by impromptu stops on empty Atlantic beaches, deserted wadis, and abandoned forts that once, a millennium ago, punctuated thriving trade routes; guests come upon cold towels and tea, a few kilims and cushions, occasionally a bivouac with a light lunch and a bottle of vin gris waiting for them (how did it get there? The scale and detail of the production slightly boggles the mind). Every evening, you drive through landscapes that appear to have been all but forgotten by time, only to pull up to an “abandoned” ruin and find, beyond the door, lit braziers, cool sheets and a welcome that seems conjured out of thin air. From €6,000 for six nights, darahlam.com