Accountants see IT investment pay off in pandemic

Until last March, most accountants probably thought of “Teams” as something to be listed on organisational charts, or built on corporate away-days. Few were familiar with Microsoft’s collaborative software of that name. KPMG UK’s chief financial officer, Tim Jones, says usage at the professional services firm had been at “relatively low levels across the organisation” while his counterpart at accountancy firm BDO, Stuart Collins, admits that “widespread adoption might normally have taken some time”.

But when the Covid-19 pandemic changed all notions of normality, both saw an immediate return on their technology investment. As soon as lockdown measures forced staff to work from home, KPMG was able to move 18,000 people in its UK and global centres on to the Teams app “overnight”. At BDO, Teams was so quickly integrated into working life that Mr Collins now says: “It’s hard to remember life without it.”

For chief financial officers across the professional services sector, this IT readiness was a vindication of spending early, and heavily, on a wide range of digital products.

In September 2019, PwC announced it was investing $3bn globally over four years in digital technologies and training. It now says some of the sums that it committed to cloud computing — putting applications and data on remote, globally accessible servers — paid dividends when the pandemic hit six months later. Similarly at KPMG, which said in 2019 that its tech investment over the next five years would be $5bn, Mr Jones says the pandemic merely brought “a massive acceleration of our digital workplace project”.

Early spending decisions by the firms’ CFOs enabled the early adoption. BDO had already piloted Microsoft Teams before the pandemic, notes Mr Collins. It was capital allocated before 2018, however, that made the real difference.

“Over the last three years, we have been implementing an agile working strategy focused on cloud-based and mobile applications,” he explains. “In retrospect, this investment has proved invaluable as it meant that we were in a good place when the pandemic hit with almost all of our people able to work remotely from day one.”

EY’s timing was tighter, but equally prescient. It had announced a $1bn, two-year investment in tax, compliance and cloud-based technologies in mid-2018.

According to Claire Chellam, the professional services firm’s UK and Ireland CFO: “One of our biggest IT investments has been a globally integrated programme [to upgrade processes] called Mercury, which launched in the UK about six months before the first Covid-19 lockdown.”

Mr Jones suggests these new ways of working at the accounting and consultancy groups have moved the chief finance role closer to that of chief technology officer.

“The role of the CFO has continued to evolve,” he says. “Businesses are making increasing investments in cloud based and ‘software as a service’ technology, overseeing the overhaul of core finance and other systems . . . As a CFO, you’re expected to play both a strategic role in the business’s long-term digital strategy and be able to assess the benefits these new investments in technology will deliver.”

Their current assessments are focused on new iterations of “enterprise resource planning” software — which can manage day-to-day business activities such as client and project management, procurement, human resources, payroll and finance.

Donna Ward, chief financial officer for Deloitte UK and north and south Europe, has been working on the rollout of software group SAP’s latest ERP system, which uses artificial intelligence to improve business processes. “While the pandemic presented a great many challenges for our people and their families, we were able to keep the implementation of this new platform on schedule,” she says. “I believe this is one of the key contributors to our financial resilience.”

CFO investment decisions have also extended to mergers and acquisitions. Ms Ward points out that buying tech consultancy Keytree last year, for an undisclosed sum, brought expert staff into the professional services group, who helped make Deloitte the largest provider of corporate tech solutions using software from SAP in the UK and one of the biggest players in Europe.

For all this tech knowhow and resilience, though, the fact remains that Covid-19 cut the revenues that these investments were predicated on. Consequently, in the UK alone, profits in the financial year spanning last spring’s lockdown fell by 8 per cent at PwC, 16 per cent at Deloitte, and 0.4 per cent at EY. Profit at BDO was flat, but only thanks to an acquisition. This has forced even the most far-sighted CFOs to focus on the here and now.

“Managing working capital has always been a fundamental business discipline, but I am sure I’m not the only CFO to say that cash management has now become a daily obsessive focus,” says Mr Collins at BDO. Ms Chellam agrees: “For most CFOs, I think there’s certainly been a greater emphasis on cash management and having to be prepared for every eventuality”.

When there is again enough excess cash to be invested, the CFOs will face another problem — and arguably one of their own making. With their remote working investments delivering such a quick return, spending on new premises may prove less than optimal.

One of Ms Chellam’s financial commitments in the past year was to Wavespace London Bridge, a purpose-built client collaboration centre in EY’s London office, supplementing another such venue in Canary Wharf. EY had envisaged teams operating from this space, but they are “currently virtual”.

As Mr Collins says: “The challenge now is to plan ahead for the post-pandemic context — what will the new world of work look like and how should our operating model change?” 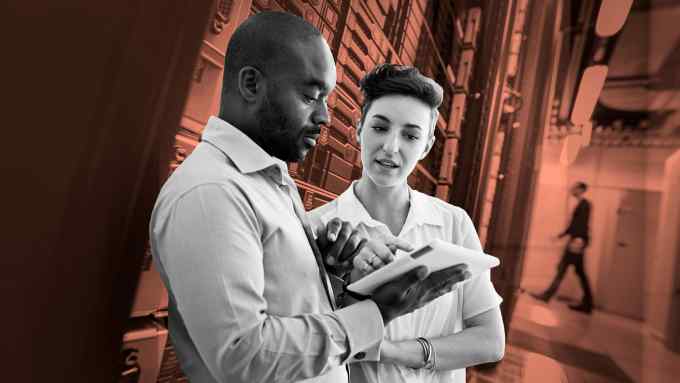