The bear necessities of Paola Pivi

The Italian artist is filling Aspen with polar cubs, and bringing the LOLs to Louis Vuitton

This autumn, some unusual creatures will be coming out of the wilds to bring humour and mischief to unsuspecting passersby. In Colorado, fluorescent-feathered, life-sized polar bears captured in human-like positions – from yoga poses to hugging – will lurk in lift lodges and ski chalets around Aspen Mountain, Snowmass and at the Aspen Art Museum, as well as adorning ski passes. In Las Vegas, 50 baby bears will hang in the atrium of the Aria hotel, dancing in the air. And if you step into a Louis Vuitton store, you’ll find images of a leopard prowling the brand’s new Artycapucines handbag designs – upturning a carpet of gilt-dusted cappuccino cups in its wake.

The artworks have escaped the imagination of Italy-born, Alaska-based performance and installation artist Paola Pivi, and breached both gallery and museum walls to lure the public into her playful and enigmatic world.

Pivi initially rose to prominence in 1999. She contributed to Italy winning the Golden Lion at the 48th Biennale di Venezia with her absurdist, life-sized anti-war sculpture of an upturned G-91 fighter jet. She wowed the same audience in 2003 with her billboard-sized photograph of a donkey in a boat – a real-life yet fantastical-seeming image she took while living on the tiny island of Alicudi in the Mediterranean. Londoners may recall her gathering 1,000 volunteers in Tate Modern’s Turbine Hall in 2009 to howl at the injustice of Chinese rule over Tibet. As a measure of her significance, directly before Covid, Italy’s national museum of contemporary art, Maxxi in Rome, turned over its main exhibition space to her work. Next year, MAC Marseille will reopen after a €5m renovation with a show dedicated to Pivi.

It feels a good time for Pivi to ruffle some – colourful – feathers. Post-Covid, her works, which engage with the human-natural world, climate crisis and political injustice, have gained new relevance. “I see the world a bit like this new Covid world,” she says, with dramatic flair. “It is exposing how we are completely disorganised, separated; how imbecilic.”

A petite, chic brunette who dresses only in clothes by Italian designer Maurizio Pecoraro (“I kind of set a joke to myself to only wear his clothes. And I did, I really did”) and talks at breakneck pace (“Feel free to interrupt me, because being Italian, I never know when to stop talking”), Pivi is ready for new converts. “My art talks to an uninformed audience exactly in the same way as the informed audience,” she says. “But in a gallery, my work is protected by a context, a shield. In public art, I have no protection, I am exposed to any passerby and all the emotions and reactions.”

She is excited by this new exposure. “The best thing about art is that we are supposed to be allowed the maximum freedom of experimentation, which should be devoid of any limit.”

Many of Pivi’s most celebrated images seem to be plucked from imagined realms, but they are in fact true happenings that play with our understanding of how humans and nature interact. Ffffffffffffffffffffff in 2006 presented an alligator emerging from a lake of whipped cream; I Wish I Am Fish strapped 80 goldfish into aeroplane seats for a three-hour private-jet flight in 2009; while 2015’s Yee-Haw allowed a collection of horses to cavort in dreamlike ecstasy midway up the Eiffel Tower. The works are “characterised by unapologetic simplicity”, wrote curator Jens Hoffmann in a 2013 essay for her Damiani monograph. “Pivi is careful not to state the meaning of her pieces. The task of constructing symbolic importance is one that viewers self-assign.”

What unites them is “the slick, remote feeling we expect from the world of media or advertising”, wrote art critic Massimiliano Gioni in the same book. “The confusion is not between art and non-art, but between the real and the possible.”

Pivi’s new Louis Vuitton bag with safari pockets (£6,250) features one such image: a leopard “borrowed from a magician” walking over 3,000 cappuccino cups, taken from a staged event in Basel in 2007. There is something beautiful yet unsettling about it, as well as a slippery kind of wit – cappuccino cups on the Capucines bag. “Absurd, maybe,” says Pivi with a laugh. “The juxtaposition of the elements is just very cheeky. It tickles you.” When she was approached about the idea, Pivi says she replied with “the fastest yes of my life. Why not? Right? It is so fun.” In many ways, Pivi sees Louis Vuitton, with all its history, tradition and respect of craftsmanship as being “like a gallery. I knew my art would be protected, elevated, promoted, loved, and taken care of, and treated with this super-sophisticated manual talent.”

That Pivi embraces art without limits – streets, bags, performance, animals, planes, mountains, sea – is a reflection of her own life without borders; she describes herself as “nomadic”, having been based in Italy, Alaska, China and India, where she and her husband, the composer-poet Karma Lama, spent four years fighting the Tibetan authorities for custody of her adopted son, now 14. “Paola embodies her work in a way that’s untethered by some of the expectations that one has in terms of how you structure your life,” says Justine Ludwig, who curated Pivi’s shows at Dallas Contemporary in 2016 and The Bass Museum, Miami, in 2018. “She takes these familiar objects or ideas and then, through deceptively simple interventions, radically confounds expectations… you get pulled into her world and you want more of it.”

“Paola’s work makes possible the seemingly impossible,” adds her Paris-based gallerist Emmanuel Perrotin, to whom she was introduced by artist Maurizio Cattelan in 1999. When Perrotin first saw her upturned fighter jet, he thought she was “either a genius or crazy. After speaking with her, I knew she was a genius.”

That genius surely lies in the balance between the playful, poetic and political nature of her work. A recent installation exhibition at Marseille’s Centre de la Vieille Charité, 25,000 Covid Jokes (It’s not a Joke), saw her collect Covid-19 internet memes and jokes. Displayed together they are both a comment on the terrors of globalisation and humour in the face of tragedy. Pivi chuckles recalling her favourite meme: that of someone taking a piece of kitchen paper and cutting it into two – a play on the rush on toilet paper. “The show is like the work of thousands of artists; it’s somebody at home somewhere thinking of a thing, and making it up, putting the writing, and putting the colour…”

Asked how her work has reframed the comic in art she is delightedly confounded: “I cannot just answer in a second like burping out an answer!” she exclaims. “I just used humour as an ingredient.” At the beginning of her career, she says “nobody saw the humour, including me. The humour started coming out later – maybe 10 years into my practice. I thought I was making very serious art. And then suddenly, people started saying: did you intentionally put irony it? Or humour? And I’m like, what irony? But they’re right. When all my work is accumulated, then, of course, it’s visible. Take the alligator in whipped cream: it’s really funny, if you think about it.” 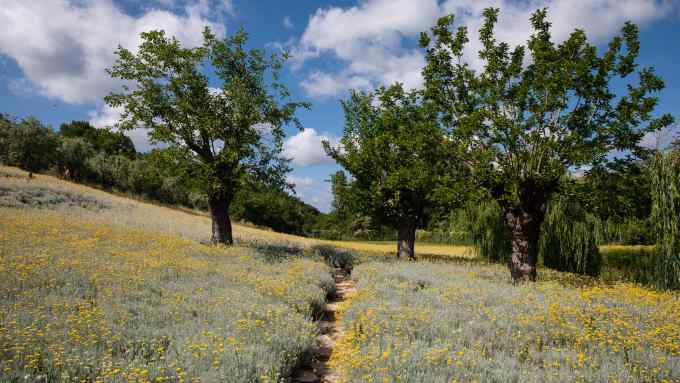