Sign up to myFT Daily Digest to be the first to know about Energy sector news.

On the south bank of the river Humber, on England’s east coast, land once considered for a coal-fired power station holds the hopes of the UK offshore wind industry.

The 217-hectare site close to the port of Immingham is one of two projects in the east of England that UK prime minister Boris Johnson said will “put the wind in the sails” of a “green industrial revolution”.

Owned by Able UK, a private industrial group, the Humber site will become a specialist port with deepwater quays, where manufacturers and suppliers can deliver components for wind farms and help create up to 3,000 “green” jobs.

Together with a facility on the River Tees, it has been awarded a share of up to £95m of government money as the prime minister seeks to turn the country into the “Saudi Arabia of wind power”. 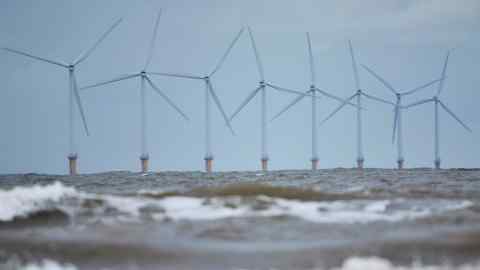 For Peter Stephenson, executive chair of the Able Group, the £75m funding awarded to his company will make the project viable. He envisaged the Able Energy Marine Park more than a decade ago and secured planning permission in 2014. He then set about forging an agreement with industry and the government to try to reduce his risk.

“It’s a shame we just couldn’t make it work [previously],” Stephenson says. “What we’re proposing here now — the manufacturing and installation [of turbine components] — that would all be in full flow [by now]. But we’ll still get there, the demand is still there. The UK government is spending a lot of money on this and wants the jobs.”

The UK has the world’s biggest offshore wind projects and Johnson plans to quadruple capacity to 40GW in nine years — enough to supply clean electricity “to every home” and support up to 60,000 jobs.

Yet two decades on from the first wind project in UK waters, the industry has proved a disappointment to many British groups hoping to enter its supply chain. Companies have struggled to compete for contracts against rivals in Denmark, China, Germany and the UAE, which unions and developers say benefit from cheaper labour or stronger financial and policy support.

Developers of offshore wind farms in Britain have often prioritised price over provenance, as they have been encouraged to bid low in UK government auctions of subsidised renewable energy contracts. Ministers have been keen to drive down prices in “contracts for difference” auctions, in order to lessen the burden on consumers, who pay for renewable energy subsidies through their domestic fuel bills.

RenewableUK, a trade body, estimates that only 29p of every £1 of capital expenditure on UK offshore wind farms goes to British suppliers. Developers say that they have struggled to award contracts to UK facilities because existing manufacturing yards are in unsuitable locations or could not cater for wind turbines of increasing size and sophistication. 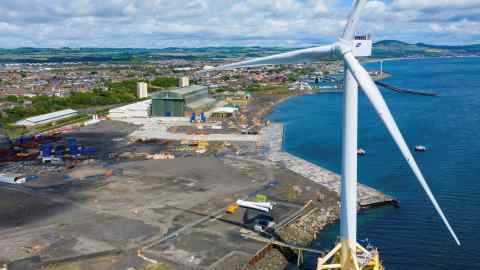 For now, trade unions in particular remain sceptical about Johnson’s rhetoric despite a flurry of announcements, including confirmation last month by General Electric, the US conglomerate, that it will build an offshore wind blade factory in Teesside, creating 750 jobs.

Sue Ferns, senior deputy general secretary of the Prospect trade union, says: “While recent government initiatives on offshore wind are small steps in the right direction, they still fall far short of the big leap we need to unlock the large numbers of green jobs that countries like Denmark are delivering.”

British suppliers and unions have heard grand promises before.

In 2010, Gordon Brown, the then prime minister, said that by 2020 the offshore industry would support up to 70,000 UK jobs. However, a report by the Offshore Wind Industry Council put the current tally at near 26,000, although this is better than a previous estimate of 11,000.

UK ministers have put pressure on offshore wind developers in the country to increase British involvement — including threats to strip them of subsidy contracts.

And they clearly want to see results in a decade’s time: the government has said that, by 2030, 40 to 50 per cent of capital expenditure on offshore wind must be spent with British suppliers. It also wants 60 per cent of the spend over the 30-year lifecycle of a wind farm — a measure that includes development and maintenance — to go back into the UK economy, up from 48 per cent.

Despite scepticism, offshore wind industry leaders are confident that, given government backing, they can deliver on the targets set.

But they have warned ministers that there must be a compromise. They say that prices in contract auctions cannot continue to fall so steeply if they are to ensure a high percentage of British content in wind developments.

“Industry is ramping up its efforts to try to secure that [60 per cent target by 2030],” says Melanie Onn, the deputy chief executive of RenewableUK and a former MP for the nearby constituency of Great Grimsby.

However, she adds: “It is completely unreasonable to keep expecting ever lower costs and expect investment in the supply chain as well. It seems quite clear you can’t have both of those.”