The co-founder of her own line and a designer for Dior Men’s has earned a reputation for edgy, highly desirable collections

Yoon Ahn, the Tokyo-based fashion and jewellery designer, has customised her Zoom background to show a cirrus‑kissed sky, the clouds aglow in sunset pink. Wearing a matte lip, thin gold wire-frame glasses and a black crew-neck T-shirt, the 44-year-old creative exudes the kind of cool you’d expect from someone who has fully tapped what makes the modern consumer tick.

Korean-born and Seattle-raised, Ahn co-founded Ambush in Tokyo in 2008 with her husband, the Japanese rapper Verbal, as a costume-jewellery label. It quickly gained traction among the fashion crowd thanks to its wearable ease and slightly subversive, pop art aesthetic: the brand received early fame for a cartoonish necklace that spelled out “pow”, which was photographed on Kanye West. Today, Ambush is stocked in 200 stores globally, from Selfridges in London to Neiman Marcus in the United States and Harvey Nichols in Dubai, and has had a host of sell-out collaborations. In 2018, Ahn’s friend Kim Jones, the artistic director of Dior Men, asked her to translate her creative vision to the maison’s jewellery department.

Ambush runs the gamut from simple silver- and gold-plated pieces to novelties such as padlock bracelets (£755), a “pill case” pendant (£460) and mushroom trinkets affixed to safety pin earrings (£285). Charms also play an essential role. “It’s a simple thing in theory – a charm bracelet – but it’s something with which our customers have really connected,” Ahn explains from her studio. “There are roses, there are teddy bears. I think we offer a charm bracelet with a tiny bit more edge.” In 2015, she expanded into ready-to-wear, which has an urbane-meets-surf-inspired look and has been worn by Rihanna and Lady Gaga.

“Yoon has this unmatched creativity that comes across in such compelling ways,” says another friend and fellow designer Virgil Abloh, creative director of his own label, Off-White, and artistic director of menswear at Louis Vuitton. “Her design ethos is that of the next generation. She stays ahead of the current time, constantly anticipating what people are going to want instead of what they think they are looking for at this moment.”

Ahn’s passion for making jewellery started in Tokyo when, she says, she was “partying a lot”. But she had already taken an extra credit course in silversmithing when she was living in Seattle. “I was made to take a class one summer during high school,” she says. “And I was like, ‘Let me do something fun for once.’” She enrolled in a programme that offered jewellery-making at a local community college. “My first piece was a silver band ring,” she adds. “Nothing complicated. Jewellery 101, basically.” But it was the process – the wax‑mould sculpting, the modelling components – that had her hooked.

Her design ethos is that of the next generation”

At Dior Men, Ahn’s hits have included rainbow crystal necklaces and bracelets, heavy chains and more padlocks – this time decorated with the French house’s iconic font (and sitting within a slightly higher price range). “I just always liked the pop appeal of Ambush,” says Jones of why he asked her to work with him. “[Ahn] is very good at looking at the archives and is also business savvy. For me, it’s just logical. Everything is so global these days, so why shouldn’t an Englishman like me work with a Japan-based designer?”

Ahn describes her working relationship with Jones as “seamless”, despite the exigencies of Covid-19. “I haven’t been back to Paris since early 2020,” she says. “But even in this situation, Dior is very, very organised.” Ahn’s current collection for the house includes a bedazzled Cuban link necklace (£1,900) and a calligraphic ring (£280) featuring artwork by Kenny Scharf, with whom Jones collaborated this season.

As with so many modern brands, collaboration has been an essential factor in Ambush’s rapid growth. One of the most successful was a sold-out run of Nike Dunks, in which the brand’s trademark swoosh was altered to create a pronounced spike. “I’ve been pretty lucky,” she says, “in the sense that all of our partners have come to us. I don’t say yes to everybody – if given the chance, I hope that people we collaborate with are the best in their category. There’s nothing above Nike, right? The reason I love doing them so much is because I want to see how different industries approach production, and how they work in terms of storytelling. I want to learn the most while working with the best. That’s how I pick collaborators.”

Other joint ventures have included redesigning Bulgari’s Serpenti bag, making a sneaker-boot with Converse, creating glow-in-the-dark headphones with Beats by Dre, and releasing a limited-edition bottle of Moët & Chandon champagne. Ambush is also poised to launch another collaboration with Nike, tied to the opening of the 2021 Tokyo Summer Olympics (Ahn is all for the event going ahead: “The city needs that energy, I think. We need something to celebrate, together.”) 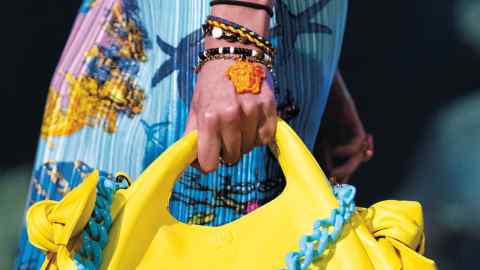 But the primary mission, as always, is Ambush’s main business, which is the jewellery. Will Ahn venture into fine-jewellery territory? It would make sense, considering the visibility and the deep pockets of a good proportion of her label’s fan base. “I am definitely interested in a high-end line,” she says. “But I still need to figure out what the right steps will be. I don’t like to rush things. I think it’s better to get really good at one thing, learn from it and then slowly build the next. I think we already have a really diverse mix of ideas in what we sell, and to go into the [fine] jewellery category, you really need a more singular message.”

She continues: “What I want to do first is to go back to a more costume-focused, even outré sort of application to the jewellery we’re already making. I also want to make it more feminine – most of my designs are not particularly feminine. But that’s what I’m feeling these days.”