Provenance is a curious phenomenon: it waves its magic wand and an object is deemed more valuable, more beautiful, more historically significant, simply for having been owned by an individual of discriminating taste. One could be forgiven for thinking that it has little place in our novelty-obsessed era, but this autumn Sotheby’s Paris will be the centre of a provenance explosion – an essential date for those who still care about antique gilt-bronze mounted porcelain, know their vermeil from their Vermeer, and can spot a Louis XIV console table at a hundred paces.

The event is the sale of the contents of the Hôtel Lambert, the mid-17th-century hôtel particulier on the tip of the Île Saint-Louis in the middle of the Seine. Designed by Le Vau before he became Louis XIV’s architect, with ceiling painting by Charles Le Brun, who went on to decorate the Hall of Mirrors at Versailles, as Paris townhouses go this is as good as it gets. Certainly His Highness Sheikh Hamad bin Abdullah Al Thani thought so when he bought it in 2007 and tasked celebrated decorator Alberto Pinto to cram it full of precious antiques.

This was not just any old sensitive restoration of a national monument: Pinto tackled previously undecorated rooms and created a continuation of the Grand Siècle splendour – he intended to out-17th the 17th century. The resulting orgy of giltwood, marquetry and tapestry, gleaming silver and lustrous marble was intoxicating. You and I might let the spandrel between the top of a doorway and the entablature of a pillared portico alone, but at the Hôtel Lambert you will find it occupied by a pair of winged putti gambolling amid a tumbling garland of flowers, their hair and wings picked out in gold leaf. John Pawson it is not.

The sale, then, is a greatest hits of great collectors that Pinto gathered in 15 years (the Sheikh has sold the Hôtel, and “the former owners no longer require a large part of its contents”, says Sotheby’s). The catalogue’s roll of honour takes in Coco Chanel and Karl Lagerfeld and branches of the Rothschilds too numerous to name. A Savonnerie carpet commissioned by Louis XIV, a silver soup tureen that Catherine II gave to one of her lovers, a pair of candelabra that once belonged to Marie Antoinette – all are here.

Yet anyone who buys an item from the Hôtel will be gaining a further unique layer of history, because for almost four centuries the house has been lived in or visited by an extraordinary line-up. It welcomed Voltaire, who called it “the house of a sovereign who would like to be a philosopher”, Rousseau, George Sand, Balzac, Lamartine, Berlioz, Liszt and Chopin. Voltaire’s lover, the Marquise du Châtelet, held a salon there in the 18th century, while the owners before Sheikh Hamad were Guy and Marie-Hélène de Rothschild, who welcomed the city’s gratin there for more than 30 years.

My favourite inhabitant, though, is Alexis, Baron de Redé, a mid-20th-century aesthete who lived in a grand apartment here from 1949 until his death in 2004. Impeccably dressed, part of a ménage à trois with antique-collecting guano baron Arturo Lopez-Willshaw and his wife Patricia, he entertained on a gargantuan scale. “It is fantastic that this sort of thing can exist in this age,” confided Chips Channon to his diary of de Redé’s parties. No detail was too small: the roses and orchids with which he filled the sumptuous rooms were sprayed with artificial dew for that just-picked look.

For de Redé, entertaining was an art form that reached its apotheosis with his Oriental Ball. “The Ball in [December] 1969 has been described as one of the most fantastic parties of the 20th century, and as a high point in my life,” he would write in his memoirs. “I am frequently asked what the reason was for giving it, and I have to say there was no special reason.” It was an extraordinary evening attended by le tout Paris, much of the international jet set and Brigitte Bardot in a chainmail bikini.

How To Spend It In...
Designer Alexandra Golovanoff’s guide to Paris 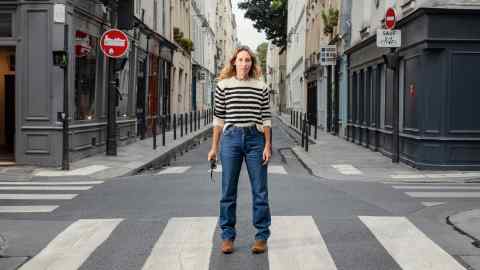 “I was smitten,” recalls Mario Tavella, who first visited the hotel 20 years ago when he was a young director of Sotheby’s. Now chairman of Sotheby’s Europe, Tavella is handling this sale. He talks of a low estimate of roughly €50mn for the whole: a huge sum maybe, but nevertheless one that represents incredible value. The six catalogues brim with enough stuff to fill a palace, whereas €50mn on the modern art market might get you one very good Basquiat or Picasso. But in many ways this sale is priceless. Only in these catalogues, or perhaps Proust, could you read the deathless sentence: “Scattered along the various salons, this ‘temple’ of beauty presents the largest collection of French gilt bronze mounted Chinese and Sèvres porcelain vases ever offered in a sale, and is comparable only to that of the Duc d’Aumont.”

Hôtel Lambert: A Princely Collection is at Sotheby’s Paris from 11 to 14 October