Fair highlights, from an ‘isolation pod’ to rapid liquid printing

In 1971, the French designer Maurice-Claude Vidili decided he wanted to get away from it all, so he built himself an “isolation pod”. A fibreglass sphere, painted white inside and out and fitted with hi-fi and white leather seating, Vidili could park it in his sitting room, climb inside and block out the hubbub of everyday life.

Today one of Vidili’s pods sits on the booth of New York gallery Maison Gerard at Design Miami, the design fair now in its 13th year. The pod (yours for $145,000) is more a thing of curiosity than of beauty — its interior has the all the allure of a caravan — but it speaks of a time when France’s designers had their sights set firmly on the future. Just two years earlier, Georges Pompidou had commissioned Pierre Paulin to redecorate the reception rooms at the Elysée Palace. Paulin (forbidden from tampering with the 19th-century panelling) had lined the walls with untreated wool and filled the spaces with radically sculptural furniture that turned its back on France’s gilded, aristocratic past.

But Vidili isn’t the only designer on display at the fair with historical tales to tell. At Converso, a gallery with spaces in Chicago, New York and Los Angeles, low-lying daybeds and pale wood consoles by Albert Frey recall the newly liberated, self-consciously modern lifestyle of 1940s California. The Swiss architect had learned his trade working with Le Corbusier on the Villa Savoye in Paris in the late 1920s, but once he’d settled in Palm Springs, he developed an elegant, refined, commercial style that became known as desert modernism — an antidote to the rather more theatrical tastes of nearby Los Angeles.

On Erastudio Apartment-Gallery’s stand, Gino Marotta’s Perspex pieces — everything from palm trees to tortoises fashioned from the brightly coloured sheet material — represent the silliness of the 1960s at its best. A Sergio Rodrigues dining table, at New York’s R & Company, surrounded by 10 commanding high-backed chairs, is Brazilian modernism at its most extravagant. It’s not just the dimensions of the table that indicate the client’s desire to prove his fortune, but the fact that it was made in Russian pine, an extremely expensive material to use in Rio de Janeiro in the early 1970s.

But Design Miami is as much about the now as the then. What marks out today’s offerings at the fair seems to be scale. This year, design in Miami is big, from the huge outdoor seating prototype just inside the entrance by Canadian designer Philippe Malouin — a monolithic, hollowed out cylinder in natural aggregate that could be a wartime lookout post — to oversized tables, sofas and lampshades created for Fendi by Chiara Andreatti.

At Hostler Burrows, there are generously proportioned blown-glass pendant lights by Frida Fjellman that have the same soft glow as candles in a glass jar, while Maison Gerard has a semi-circular sofa by William Georgis in a silver and green camouflage fabric. The scale of these pieces is perhaps simply a reflection of the clientele that come to the fair from North and Latin America, who tend to live in large homes.

Georgis is an American designer who has published a book called Make It Fabulous — which could be the slogan for Design Miami. Whereas the edition of the fair that took place in Basel in June was a hushed, more scholarly affair offering some significant work, particularly by postwar Italian designers, the December outing in Miami (where the event originated), is a more colourful muddle. But what it lacks in rigour, it makes up for in bravado — a bit like the city itself.

A series called Design Curio has been introduced to the fair to bring variety, and it offers everything from a one-off and thoughtful lighting installation by the New York designer Lindsey Adelman — a complex assemblage of glass, porcelain and metal — to a series of sheet steel objects by a young Russian-born, New York-based designer called Harry Nuriev, which could be anything from plant holders to extra large chess pieces.

While there is a strict vetting process carried out by veteran dealers before the fair opens, some oddities manage to slip through the net. On the stand of Jason Jacques, for example, a riot ofceramic works includes a kneeling weeping figure, finished in virulent green flock.

Elsewhere in the fair, sanity prevails. Galerie Kreo, the pre-eminent Parisians, have given their stand over to the Bouroullec brothers, Erwan and Ronan, France’s most interesting contemporary designers, who manage to make whimsy work. One of their room dividers is made of hanging columns of upside-down ceramic pots, and another is made of spiny plastic branches: both are perfectly resolved. A set of furniture created from chaotic arrangements of bamboo by another pair of brothers, the Americans Mike and Doug Starn (at Cristina Grajales), comprises lyrical pieces that suggest the aftermath of a wild party, with their trailing colourful threads and padding of messy silk and velvet cushions.

Perhaps the most disappointing display, however, is one that looks ahead, thanks to the MIT (Massachusetts Institute of Technology) Self-Assembly Lab. It has brought an example of rapid liquid printing to the fair — a tank filled with gel, which a robot turns into products. It is, apparently, a breakthrough in 3D printing and, according to MIT, “the future”. What a shame that the product is a dull grey, totally undesirable plastic beach bag. The future looked a lot better in 1970s Paris. 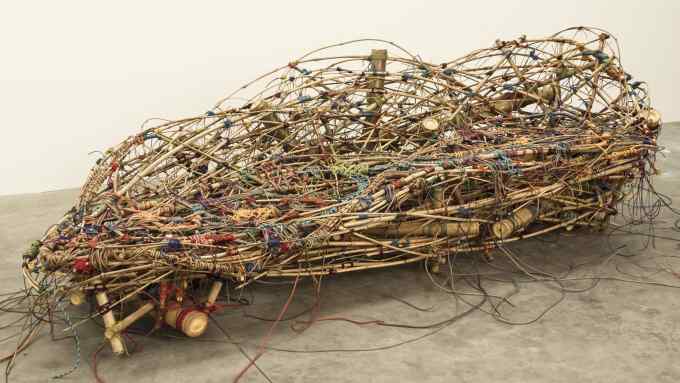