Penniless and with just the clothes she was wearing, Elena Donets escaped “hell” in Mariupol when her apartment block was destroyed by Russian shelling.

Fleeing the besieged southern city that has been hit by the heaviest fighting since Russia’s invasion of Ukraine last month, the 52-year-old telecoms worker joined millions of other Ukrainians as part of one of the world’s largest and fastest-growing movements of internally displaced people this century.

“The last thing I remember are windows and iron doors blowing up. Some people were crushed and could not get out,” Donets said, showing a video of her burning home.

As she arrived to the sound of bomb sirens in Lviv, a city less than 100km from Ukraine’s border with Poland and about 1,000km from Mariupol, Donets said she had no idea what would happen to her.

A study by the International Organization for Migration released this week showed that 6.5mn people had been displaced within Ukraine since the beginning of Russia’s month-long war. This was in addition to the 3.5mn who had fled the country and were designated as refugees. Unicef said on Thursday that 2.5m of the internally displaced were children.

Syria has 6.6mn displaced people, more than other countries that have been suffering decades of conflict, including the Democratic Republic of Congo with 5.3mn and Afghanistan with 4.6mn, according to data from the Internal Displacement Monitoring Centre, part of the Norwegian Refugee Council.

“We see people arriving in different parts of Ukraine from cities like Mariupol, deeply traumatised by what they have been through. The relief of having escaped the horrors of fighting is marred by the question: what is next? Some hope to be able to go back, while others have nothing to go back to,” said Pascal Hundt, head of delegation at the International Committee of the Red Cross in Ukraine.

“The scale of human suffering and forced displacement due to the war far exceeds any worst-case scenario planning,” said António Vitorino, IOM director-general.

Cities, towns and villages, especially in western Ukraine, have been giving refuge to people coming mainly from the east and south-east, where the fighting has been heaviest and in some case still rages, said Serhiy Kiral, Lviv’s deputy mayor.

In Lviv’s relative safety, 200,000 newcomers have registered since the invasion began a month ago — roughly 20 per cent of the pre-war population of more than 1m. Upmarket spa cities such as Truskavets and ski resorts such as Bukovel, known as “Ukraine’s St Moritz”, are helping evacuees with lodgings or food. This week, Ukraine’s government launched programmes for the internally displaced, including a stipend of 2,000 hryvnia ($68) per month per adult, and 3,000 per child, and allowances for those employing or sheltering refugees.

Although thousands have been evacuated from war-torn areas every day recently, getting people out safely remains dangerous and challenging.

Ukraine’s president Volodymyr Zelensky said on Wednesday that 100,000 civilians remained trapped in Mariupol, a battle he has compared to Verdun. “For more than a week now we have been trying to organise stable humanitarian corridors for Mariupol residents, and almost all our attempts, unfortunately, are disrupted by the Russian occupiers, by shelling or deliberate terror,” he said, adding that a humanitarian column “captured” on an agreed route near Manhush, and employees and bus drivers of Ukraine’s State Emergency Service, had been “taken prisoner”.

She said she expected the humanitarian crisis to spread because hitting civilians “with all his might” was part of Vladimir Putin’s “strategy”.

“Therefore, responding properly to the humanitarian crisis is no less important than repelling the enemy at the front,” Vereshchuk told the Financial Times.

Last week the UN said more than 12mn “were estimated to be stranded in affected areas or unable to leave due to heightened security risks, destruction of bridges and roads”, warning of the lack of Russian guarantees for safe evacuation in humanitarian corridors.

Many Russian speakers living in eastern Ukraine that Putin vowed to defend as “victims” of “the Kyiv regime” have been caught in the crossfire in places such as Mariupol and fled to safer parts of the country.

“People were left dead by the roadside, there was nowhere to bury them. People without water, food, light, hungry. We lived like this for 22 days, then somehow we found a way out and left the city,” said Fikrat Jabarov, a 41-year-old Russian born in Azerbaijan and a resident of Mariupol as he arrived by train in Lviv this week. “It was very scary to drive, they were shooting along the way. We spent the night on the road, the whole night we waited for the shooting to stop in order to move on.” 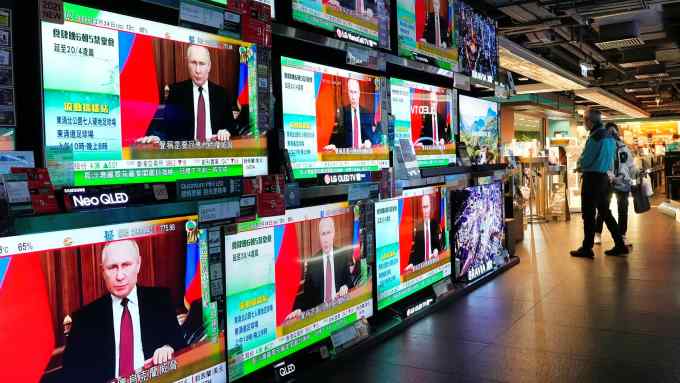