Hudson Lockett in Hong Kong and Eleanor Olcott in Taipei

Taiwan’s dollar has fallen sharply on growing expectations the US will brand the Asian country a currency manipulator, despite the two strengthening ties in the face of an increasingly aggressive China.

US president Joe Biden’s administration is widely expected to include Taiwan in its semi-annual name-and-shame list this month because it meets all three criteria used by the Treasury department to evaluate whether a country is debasing its currency. Yang Chin-long, governor of Taiwan’s central bank, has admitted it was “possible” that Washington could brand the nation a manipulator.

But analysts warned that any tariffs imposed on Taiwan’s exports as a result of the designation could damage an important relationship in the region. Biden has sought to bolster ties after recent incursions by China’s military into Taiwan’s air defence identification zone and as a global shortage in chips has increased US industry’s reliance on technology groups such as Taiwan Semiconductor Manufacturing Company.

“If [the US] want to reduce our trade surplus with them, then we could just stop selling them our chips,” Yang recently joked to legislators at a hearing in Taipei. “But they need them.”

The Taiwanese currency has dropped more than 2 per cent from its recent peak in early March to 28.5 per US dollar, after holding steady at about 28 per dollar for most of the first quarter.

In addition to concerns that the US could label the country a currency manipulator, the fall in Taiwan’s dollar has also been compounded by a shift in global markets.

Rising US Treasury yields have made holding Taiwanese debt relatively less attractive for global investors, while a broad shift away from growth stocks such as those in technology has prompted a sell-off of shares in Taipei-listed semiconductor makers. Those factors have hit demand for assets denominated in the Taiwanese dollar.

Expectations that the Biden administration will target Taiwan have risen following the appointment of economist Brad Setser to the Office of the US Trade Representative in February. Setser’s critical report on the currency hedging tactics used by Taiwan’s central bank was cited by the Treasury when it put the country on its watch list last year.

Analysts pointed to trading patterns in the Taiwanese dollar during January and February that they believed indicated attempts by the central bank to limit appreciation in the currency, supporting the important export industry.

During the period, the Taiwanese currency frequently strengthened against the dollar early in the day before weakening again in the final hour of trading. Iris Pang, chief greater China economist at ING, said that suggested central bank involvement. “It’s very clear . . . there was some kind of very weird operation going on in the Taiwan dollar forex market,” she added.

The Big Read
TSMC: how a Taiwanese chipmaker became a linchpin of the global economy 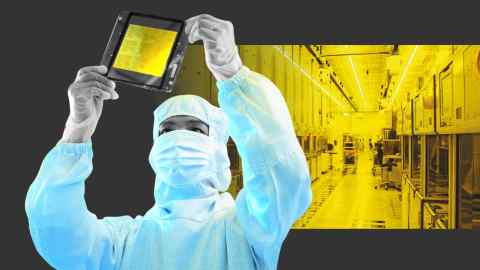 A book by current and former officials at the central bank alleged that policymakers’ resistance to a stronger currency had hurt Taiwan by encouraging many exporters to focus on making cheap goods rather than innovative products.

Even if the US does brand Taiwan a currency manipulator, some analysts believed Washington was unlikely to follow through with tariffs given the delicate nature of regional geopolitics.

Get alerts on Currency wars when a new story is published