If you think the same, join us
Opinion Serious Money

Will gold have its day as a crisis hedge?

What is it that Palantir Technologies knows that the rest of us don’t? Quite a lot, if we are to judge by the number of governments that are prepared to pay for the US high-tech company’s data-crunching service.

So what should we make of Palantir’s purchase this month of $50.7m worth of gold? The company bought bullion with the precious metals market very far from shining.

Rather ominously, it has not put its money into a gold fund or any other gold-based financial instrument but in the ultimate safety of 100oz bars, to be stored, it says, “in a secure third-party facility located in the northeastern United States”.

Palantir has made clear that these decisions are driven by a view that the world is becoming more dangerous — or at least that the economic and financial outlook is looking less predictable. As Shyam Sankar, chief operating officer, put it in an interview with Bloomberg: “You have to be prepared for a future with more black swan events.”

The investment quickly got the internet buzzing with conspiracy theories. “One of Palantir’s biggest customers is the CIA . . . I’m sure they have some inside information on what is about to happen,” said one poster on the Reddit social media site.

We should put this in perspective. The $50.7m is not huge for Palantir, given that it had $2.3bn in cash reserves at the end of March. Also, while billionaire co-founder Peter Thiel is a tech investor with a stellar record, there is no guarantee of financial success at Palantir. It is still making losses nearly two decades after its foundation. If the core business isn’t profitable, why should Palantir be good at betting on gold?

But, that said, the precious metal may indeed be worth a look. To the joy of gold bugs last year, it responded in traditional fashion to the onset of the pandemic, by offering a haven of safety, as it has over the centuries. With investors fleeing the financial markets, and global equities plunging, gold soared from $1,558 an ounce at the end of 2019 to a record high above $2,000 in August 2020.

Since then, as the vaccine rollout allowed the world economy to recover, investors have poured back into equities driven by central banks’ renewed commitment to keep interest rates ultra-low. Gold has fallen to about $1,800 an ounce.

Compounding the downward pressure on gold are the widening concerns about inflation, especially in the US, where the annual rate has leapt from just 1.4 per cent in January to 5.4 per cent in July. Central bankers are mostly saying that this is a one-off response to post-pandemic bottlenecks and supply disruptions.

But there are hints that labour shortages are pushing up wages — increases that would prove hard to reverse. Those would be welcome in terms of reducing global economic inequalities, but they would tend to raise general price levels, risking persistent inflation.

If central banks react in the textbook way by raising interest rates, bonds would start generating higher incomes, making gold (and other incomeless assets) less attractive. Not surprisingly, the consensus market outlook for gold is therefore flat, at best. JPMorgan sees “a continued bearish directional outlook for gold prices over the coming quarters”. And Goldman Sachs says that for commodities generally “the trend is not our friend right now”.

Bear in mind that, even after the 10 per cent drop from last year’s peak, gold still trades close to its pre-2020 record high — hit when prices jumped after the 2008 global financial crisis, amid simultaneous fears of inflation and banking crises. 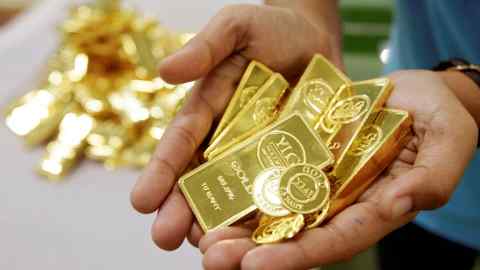 Also take care in investing in gold for long-term gain. Over the past 30 years, the metal has hugely lagged behind US equities, although it has kept pace with bonds (during a dull time for fixed income).

But there is a bullish case to be made. Despite rising bond yields, increasing inflation means that real interest rates remain negative — and have in fact fallen further in recent months. As Rhona O’Connell, an analyst at broker StoneX, says, the opportunity cost of holding assets that don’t generate income — such as gold — has declined, with investors losing less income in real terms than even a few months ago.

But the recent past suggests a big upswing in prices would probably only come with another crisis, as it did in 2008-11 and 2020.

There is no shortage of potential triggers — the Afghanistan debacle, disruption in Middle East oil supplies, US-China tensions, and the Russia-Ukraine conflict to name a few.

Moreover, the planned exit from the unprecedented global easy money regime is a move into the deep unknown, fraught with danger. Act too fast and you choke the post-pandemic recovery. Wait too long and inflation could go out of control.

The task is complicated by governments which are in no hurry to see high interest rates, with some preferring to see inflation reduce the burden of their Covid-era borrowings. Central bank governors will need all their political as well as financial skills to secure a safe landing. If they get it wrong, there could be a whole bevy of swans flying over the horizon.

Writing to his investors this month, he says he has “serious doubts” how much impact the US Federal Reserve’s expected unwinding of easy money policies would have on markets and on the economy. The history of the last global upsurge in inflation in the 1970s and 1980s is one of the authorities delaying serious action until it was almost too late, as John Plender wrote for FT Money this year.

So putting a slice of your portfolio into gold in these circumstances may have some point, especially for very risk-averse investors.

But don’t go to extremes. If you are really concerned about total economic collapse you should stash spam and baked beans, not bullion. And, unlike Palantir, there is no need to buy bullion and worry about storing it: gold ETFs are mainstream today.

Above all, don’t go liquidating the rest of your portfolio. As any wealth manager worth their salt will say, the key to effective financial protection, including against extreme events, is diversification. After all, at Palantir, the share of cash going into gold is under 3 per cent.

This article has been republished to correct a chart error