The ‘real secret’ of how to farm in a hotter, drier climate

The parched earth can no longer grow the grass needed to feed all the cattle and sheep on the 500-acre farm that Peter Shinton has built up over almost 30 years near the New South Wales town of Coonabarabran.

“We had to sell our cattle even though we got only half of what they would normally sell for, but we still have around 150 sheep,” the 67-year-old farmer says.

Mr Shinton is suffering like many Australian farmers from the worst drought in living memory but he still has access to groundwater thanks to a bore hole he dug during the last dry spell in 2006. Unlike many other farmers in the region he has not had to buy in water for his animals, showing that good water management can be critical to surviving extreme weather.

Such adaptation techniques being deployed by drought-hardened Australian farmers could provide a model for other countries where drought is becoming more common because of climate change.

In Australia, warmer temperatures are increasing the frequency and severity of already common droughts, reducing agricultural output and economic growth. Dry spells are causing hardship for cattle farmers, who are shedding animals to cope with a lack of grass and surging feed prices. Climate conditions between 2000-01 and 2014-15 also lowered national wheat yields by 11.9 per cent, according to a report last year by Abares, the Australian government’s agricultural forecaster.

The report also found, however, that strong productivity improvements since 2006 have helped to offset worsening climate conditions, which were mainly higher temperatures and lower rainfall in south-east and south-west Australia.

Robert Ruwoldt, who runs a 7,000-acre crop farm in western Victoria, was an early convert to conservation tillage — a form of cultivation that seeks to improve soil conservation and moisture levels by reducing the intensity of ploughing and retaining plant residues on agricultural land. He began implementing the system in 1982 after a severe drought and says it has enabled him to grow crops such as wheat, barley, canola and fava beans throughout consequent dry spells.

“Anyone can grow a crop with rain but there is a real secret to growing when it is dry,” says Mr Ruwoldt, who won farmer of the year in 2011 for his work on sustainable farming methods.

He seeds all his crops without tilling the land and retains the residue of the previous year’s crop in his fields, which returns nutrients to the soil, protects it from erosion and excessive drying. Mr Ruwoldt also deploys soil moisture probes on his farm to manage fertiliser and herbicides to control weeds that could compete for water.

He says this method produces similar yields to regular tillage farming in seasons with good rainfall but performs much better during prolonged dry periods.

Almost all Australian grain farmers now use conservation tillage techniques, according to James Hunt, associate professor at La Trobe University. It has become popular in the US, Canada and Latin America but less so in high-rainfall regions such as Europe. This year’s drought on the continent, however, could persuade European farmers to follow suit, he says.

In Western Australia, many are experimenting with dry seeding, a technique whereby seeds are sown into a dry seed bed before the onset of the autumnal rains in contrast to the traditional method of sowing seeds into moist seed beds after rain. Research by Australia’s Commonwealth Scientific and Industrial Research Organisation found this method decreased heat stress during the grain-filling period of the plant’s development because of early flowering and made better use of farm machinery and labour, generating potential yield benefits of up to 35 per cent with minimal production risk.

Some Australian farmers and agricultural businesses are moving to new growing regions or changing the type of crops they plant in particular areas in response to changing climatic conditions. Brown Brothers, for instance, has been making wine in the state of Victoria for 129 years. After inviting a climate change scientist to make a presentation to their board, Brown Brothers decided that climate change was the family businesses’ biggest challenge. They expanded to Tasmania in 2010 after almost a decade of dry conditions in their traditional growing region in north-east Victoria.

“We lost thousands of tonnes of fruit due to forest fires and had tried to grow pinot noir in north-east Victoria but just couldn’t manage this effectively, even near the mountains, due to the heat,” says Ross Brown, Brown Brothers’ executive director.

Warmer temperatures are causing grapes to ripen weeks earlier, forcing winemakers to adapt their harvesting schedules for white and red grape varieties. These temperature changes can also lead to higher sugar and alcohol content in wines, which affects their taste, complexity and marketability.

In a bid to overcome these challenges, Brown Brothers teamed up with the CSIRO to develop a new grape variety better suited to the arid conditions in its Victorian vineyards. With an alcohol content of 12-13 per cent, Mystique is a combination of cabernet sauvignon and four other common grape varieties.

“We need to be in sync with consumer tastes and worked with scientists on new grape varieties, which retain great colour in a warm climate but without the very high level of alcohol,” says Mr Brown.

Many Australian growers are also responding to warmer, drier conditions by changing the way they plant, irrigate and protect their grapes from the sun.

“There is less winter rain in many areas, including the Barossa [in South Australia], which is affecting moisture levels in the soil and prompting some producers to irrigate during the winter months,” says Professor Snow Barlow, an agricultural scientist at University of Melbourne.

Some winemakers have even stopped planting vines in a north-south pattern — a traditional method imported from Europe to provide maximum exposure to sunlight on the grapes — while others are using vegetation canopies to shield grapes from sunburn during the hottest parts of the day, says Mr Barlow.

“The nature of this year’s heatwave in parts of Europe may cause some winemakers to take a look at techniques now being deployed in Australia.”

Video: How to feed 10bn people

READ MORESustainable Food and Agriculture
The ‘real secret’ of how to farm in a hotter, drier climate 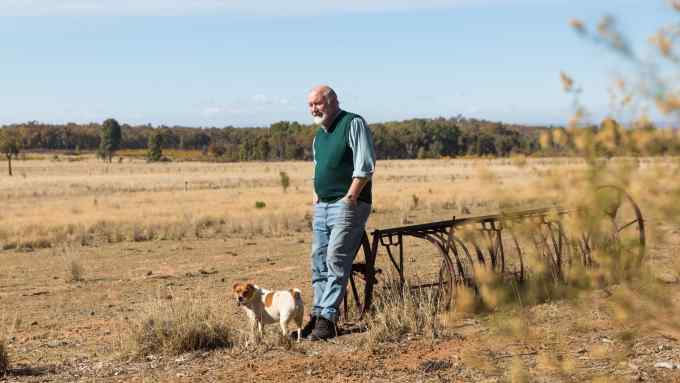