US group has fallen behind its European rival, as questions persist over the quality of its engineering

Airbus and Boeing have competed neck and neck for five decades in one of the world’s great commercial rivalries. But, as the contest resumes in earnest in the wake of the pandemic, the old order has changed. Airbus now has a wide lead in the single-aisle market — the hottest area of aviation — leaving Boeing to grapple with how to bridge the gap.

The European company has grabbed new orders and market share with its popular A320 family of narrow-body jets, which predominantly serve shorter-haul destinations, to which travel has rebounded faster, compared with long-haul flights.

The bestseller within the A320 family is its largest model, the A321neo, which is also offered with extra fuel tanks in long-range and extra-long range variants. Some airlines — such as America’s JetBlue — now use these for long-haul flights that were traditionally flown by more expensive wide-body jets.

Airbus’s market share is only likely to grow as the group moves ahead with aggressive plans to lift output of the jets to 75 a month by 2025, despite industry-wide concerns about constraints in the supply chain. Production had reached a record 60 a month in 2019 before dropping to 40 a month when Covid hit.

Some analysts have questioned when Boeing will be able to regain some of that lost market share, as the company has continued to deal with fallout from the grounding of its 737 Max 8 after two fatal crashes within five months.

Global regulators have since cleared the jet to fly again after Boeing implemented software and design changes and the plane is notching up new orders.

Another challenge looming, however, is the recertification of the shorter 737 Max 7 and longer 737 Max 10 variants. Boeing is racing to complete those processes before the end of the year to avoid having to develop a new flight deck under rules introduced by US Congress following the Max crashes.

I have a lot of time for Dave Calhoun . . . but he’s not in Seattle and the problems in Boeing lie in Seattle

Boeing has also suffered production issues that have prevented customer deliveries of its wide-body 787 aircraft. In addition, development of its 777X aircraft has been delayed, while problems on a number of big defence contracts have only added to the challenges.

Union representatives, meanwhile, have criticised the company’s decision to move its global headquarters from Chicago to Washington, DC — seen as taking it further away from its spiritual home, the commercial aircraft factories of Seattle, and adding to persistent questions over the quality of its engineering.

Repeated delays on the commercial side have frustrated some of Boeing’s largest customers, including Ryanair. The low-cost carrier’s chief executive, Michael O’Leary, has said sweeping changes are needed to Boeing’s senior management led by chief executive Dave Calhoun.

In a recent interview, O’Leary told the Financial Times that the US aviation group has “lost huge market share and existing customers are being lost to Airbus, which is why I don’t understand why they sit there and do nothing”.

“I have a lot of time for Dave Calhoun . . . but he’s not in Seattle and the problems in Boeing lie in Seattle,” he said.

But others, including Lufthansa chief executive Carsten Spohr, have continued to back the US company. Boeing has insisted that things have changed since the Max accidents. It is also ramping up the hiring of engineers as it works with the US aviation regulator to certify its upcoming 777X aircraft.

However, in a further blow, Boeing last month lost out to Airbus on a $37bn order from China’s three big state airlines. They chose 290 A320neo jets — the biggest order by Chinese airlines since the start of the pandemic. The country is a crucial market for both Airbus and Boeing and the orders come at a time of rising political tensions between the US and China.

Calhoun has previously cited uncertainty over orders from China as one of the three main risks facing the company, along with securely boosting production of the Max and resolving issues around the 787. China was the first country to ground the Max and, although its aviation regulator last year approved its return to service, Chinese carriers have not started flying the plane commercially again.

The multibillion-dollar question facing Boeing, therefore, is how to recover its lead against Airbus, at the same time as China’s first self-developed aircraft — Comac’s narrow-body C919 — is finally nearing completion.

Boeing abandoned a plan for a new midsize aeroplane — a twin-aisle aircraft that would have sat between the 737 Max and the larger 787 — and it remains unclear what its next step will be. Its balance sheet also remains constrained, with some $45bn of net debt.

The company needs to “launch an answer to the A321neo,” says Kevin Michaels, managing director of Michigan-based AeroDynamic Advisory. “Can they afford it? I think they can. Their balance sheet isn’t great but you’ve got to invest in your core business to stay around in the long run.”

“The other problem they face is knowing what to do — if you do press the button, how do you do that plane? The world is about to change massively but no one yet knows what that technology will be and you could end up spending $20bn on something that will be immediately obsolete,” says Nick Cunningham, analyst at research firm Agency Partners in London, who believes the company needs to raise equity to fund a new programme.

But Calhoun has recently played down any concerns about the company’s market share position vis-à-vis Airbus. “At this moment in time, it’s less important,” he told an investor conference in June. Boeing, he added, had to concentrate on getting planes back in the air. 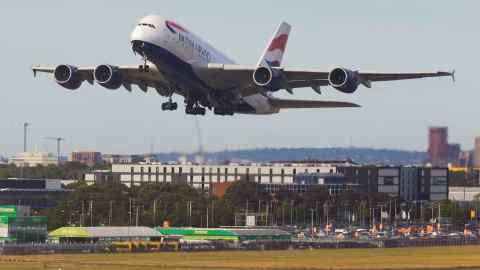 “We have to stay focused on doing that incredibly well. One aeroplane at a time. If I jump to a market share discussion immediately and say, ‘Let’s get above 50 and let’s do it next year’, what happens? The whole system gets crammed down in every way.”

He also indicated at the same conference that the company might not launch anything new for at least another couple of years. He does not believe that the performance improvement to justify an all new aircraft currently exists.

Boeing, he said, was sure it had the ability to compete. “I’m confident, my sales team is confident,” said Calhoun. “Our customers express confidence to me, so why would I rush? No good reason.”