There were surreal scenes outside the Valentino show in Paris on Sunday as members of the fashion industry tried to reach the show despite sealed-off roads, chaotic traffic jams and armed police everywhere. The late, former president of France, Jacques Chirac, was lying in state inside the Les Invalides monument, and a line of people over 1km long stood near the show, waiting to pay their last respects. It was a marked contrast: the willingness to wait in line for hours versus the frenetic impatience of fashion. “He was popular,” explains my taxi driver. “Is Macron popular?” I ask. “For the first year. He is, how you say? A technocrat.”

While Balenciaga’s work-themed show — with its EU-like circular venue and anonymous suits — might have suggested clothes for technocrats, there was a more aristocratic mood at Valentino. Designer Pierpaolo Piccioli is one of the most talented designers working today when it comes to evoking a world of beautiful refinement.

This season, he was inspired by grisaille, a painting technique popular in the 16th century in which the colour is stripped out leaving only greyish white. Piccioli explained that, “it was quite metaphorical for what I did, I started with one of the most humble and universal items, the white shirt, which I wanted to infuse with the idea of couture. To make something ordinary extravagant.”

Thus the show started with variations on the white shirt, from blouses with ruffled collars and billowing 18th century sleeves, worn with little shorts, to off-the-shoulder puffball tops and tunics with sculptural ruffles. As a foil to the white shirt, Piccioli had also been looking at the French painter Henri Rousseau, and there was a dreamlike, jungle motif in the show. A long navy column dress in the typical, slightly monastic Valentino cut came with a rainforest by moonlight depicted in beads and sequins; a pink sparkly dress showed a Rousseau-esque panther, while silk shirt dresses featured a tropical plant pattern.

Another designer known for romance, Giambattista Valli, can be rather fussy, but he delivered some striking eveningwear pieces this season. A white bridal-like dress came with frills that danced around the body.

Givenchy’s designer Clare Waight Keller has proved herself when it comes to making occasionwear — after all, she designed Meghan Markle’s widely acclaimed wedding dress. The house has yet to create such a strong identity as it had under Riccardo Tisci, however, and the current luxury market demands that consumers know exactly what a house stands for in the mould of Hedi Slimane or Alessandro Michele.

In the absence of Phoebe Philo at Celine (now tenured by Slimane), there is also a much-discussed gap in the market that Waight Keller could be making this realm her own: the space for a pared back but inventive, female-designed label. Certainly, Waight Keller has a good handle on modern femininity and the different facets of female identity.

She went back to the 90s for her inspiration, looking at her time spent in New York and Paris, and her observations of the pared back versus extravagant styles she observed. She had also been reading the book ‘90s Bitch by Alison Yarrow, which examines the era’s dubious legacy for feminism. “We look back at it as a moment of empowerment for women but in the end it was a hypersexualised era,” said the designer backstage, “what felt like coming out of the 1980s and all that structure seemed liberating, but actually it was the era of the brazillian wax and the thong. So I wanted to look back at clothes from that time and what we should have been referencing.”

The show combined boyish tailoring, such as shorts suits in grey and navy, and sharp sleeveless jackets in check or chocolate silk, with more typically feminine pieces in the form of silk blouses and demure billowing nightgown-like dresses. These came in block colours from lilac to turmeric, as well as a furnishing fabric floral. Sleeveless tops and dresses came with stiff taffeta bows that looked as if knotted around the body, and that 90s staple — the crop top — had been reinvented in leather, “for protection,” said Waight Keller. They were worn with a pencil skirt.

Another 90s (and 2000s) throwback, distressed denim, also appeared, in the form of jeans with rips and holes at the knee, dresses and skirts. For many the look has to unearth many bad memories of manufactured girl and boy bands, but the denim was all taken from 90s jeans that were deconstructed and repurposed: Waight Keller said, “even as a luxury fashion house we can take steps to be more sustainable and actually, you can still wear something from the 90s; you just have to reinterpret it.”

Stella McCartney is well known for being the queen of green when it comes to the luxury world (not that there is huge competition) and she declared this show her most sustainable yet. Over 75% of the ready-to-wear was eco-friendly, incorporating recycled polyester, organic cotton, sustainable viscose and Econyl (a recycled plastic) along with hemp and sustainable raffia.

The show focused on fluid, modern shapes — in an industry obsessed with nostalgia and retro, McCartney is impressively forward-looking. Loose silk jumpsuits and dresses came in both neutrals and pastels, featuring wide sleeves with scalloped details, and tailored jackets were paired with split A-line skirts. During the show, images of mating animals were projected on to the walls — presumably in a humorous nod to her vegan reputation.

In July, McCartney announced a “partnership” with LVMH, to both develop her own label and advise Bernard Arnault on eco policies, having left the Kering group only a year previously. Backstage after the show, she said, “the idea of being this sustainable advisor to Mr Arnault is as exciting as coming into their stable, the two going hand in hand is hopefully the future.” She added, “Legislation and policy change has to happen; you have to be incentivised to do business. I think most young designers will embrace the conversation and change. Looking at upcycling and new ways of using old materials is a really big challenge, but I think most creative people like a challenge.” 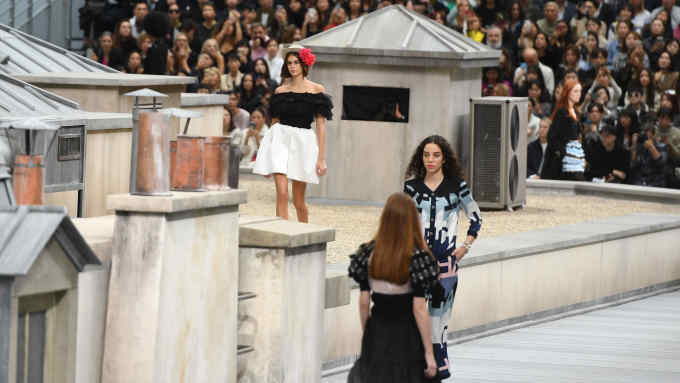