Great gadgets for kids (and your own inner child)

You owe it to your eardrums to invest in a decent kids’ electric guitar rather than a janky knockoff that wails like an unhappy cat. Enter Loog. The startup was founded by Uruguayan musician Rafael Atijas as part of his master’s thesis project at New York University and, after conquering the US market, it has just launched in the UK and Europe. Loog made its name with acoustic guitars and its new line of electric models follows the brand’s chart-topping formula: they might look cute, with the dimensions of a ukulele, but these are not toys. They are the real rock ’n’ roll deal, only shrunken.

There are three guitars targeting different ages: the Mini Electric, for age three-plus; the Pro Electric, for six-plus; and the Pro VI Electric, for age nine and up. All are light but pleasantly sturdy and made from traditional hardwood painted cheery colours such as sunshine yellow or cherry red. And they sound the part. Each battery-operated instrument has a built-in amp but can also be plugged into a standalone amp if you’re prepared for your toddler to go a bit more Black Sabbath. While the Pro VI has six strings like a regular guitar, the Mini and Pro both have three, making them much easier to learn on. But because their strings – G, B and E – are the same as the highest trio on a regular guitar, when it’s time to graduate to a full-size model kids will already be familiar with many of the chords, finger placements and tuning procedures.

Most appealing of all might be the supporting acts that keep kids engaged and ensure they don’t tire of chords or have to bother with pesky sheet music. Each guitar comes with access to an app featuring chord-teaching monsters, tuning tutorials, pre-recorded classes taught by experts, digital flashcards (you also get a physical pack) and a neat selfie function that directs your fingers in real time. Also: there’s a 15-strong digital songbook and additional tutorials for hits from the likes of David Bowie, Dolly Parton and Nina Simone. Naturally, when it’s time to rock out, the app’s monsters are ready to play along with you. Loog Mini Electric, from €177; Pro Electric, from €199; Pro VI Electric, from €211; eu.loogguitars.com

Word perfect
The actual Paperwhite e-reader that comes with Amazon’s new kids’ bundle is the same as the adult one: a considerable step up from regular Kindles. It has a bigger, sharper screen, more storage space and a built-in light for reading in the dark. It’s also water-resistant and has a “warmth” slider to set the screen to a soft, yellowish glow close to bedtime.

The difference with the kids’ package is the goodies that come with it. Chiefly: a one-year subscription to Kids+, a library of 1,000-odd books for under-12s, as well as a two-year warranty that covers accidental damage. This is a dedicated e-reader so your kid won’t be able to flick between games or apps. Kindle Paperwhite Kids, £139.99, amazon.co.uk

Can I have a Playdate?
Ever thought to yourself, while playing your GameBoy, “What this thing really needs is... a crank”? The Playdate, a palm-sized device with a fishing reel on its side, is surely the strangest gaming console to hit the market lately. But when you play its weird and wonderful games, its oddness makes sense; suddenly you question how you ever had fun without a spinning crank. In one particularly addictive game, it controls an absent-minded robot who’s running late for a date.

The games are released in drops with two free ones each week for the first 12 weeks. Created by Portland-based company Panic, it has a sharp screen but it’s not backlit. Good for teens and kids at heart. Playdate, $179, pre-order at play.date

And so to bed…
Given the glut of sleep aids for adults, it’s nice to see a device aimed at jittery little ones before lights out. This mint-green box of calm – from French startup Morphée, which also makes an adults’ version – spouts nearly 200 snooze-inducing audio stories. It’s pleasingly analogue: no screen or blinking lights.

Kids simply twist one dial to select an animal (lion, butterfly, giraffe) and another for a destination (space, castle, island), and a tale will be told – through a speaker with star-shaped holes. Each session lasts eight or 16 minutes; it also plays soothing tunes and sound effects, like trickling water. Aimed at kids aged three to eight, it’s charged via a USB port and is light and travel-friendly. My Little Morphée, €79.95, morphee.co

Who’s it?
Picoo’s simple sell is enormously appealing: it’s a gaming device to get kids off the couch and running around outside. Created by a Dutch startup, and recommended for ages four to 12, the “consoles” – which come in packs of four – are screen-less, interactive wands that light up, buzz and beep.

They are battery-operated and don’t require WiFi or any fussing about; kids just scan a game card. It spices up old-school classics: in Zombierun, a supercharged version of tag, the zombie must “tag” the others and turn wands from purple to green. The 10-game selection, which is constantly growing, also includes takes on treasure hunts, whack-a-mole and educational puzzles. Picoo starter set from £199, shop.picoo.com

HTSI
The best beach and swimming gear for kids 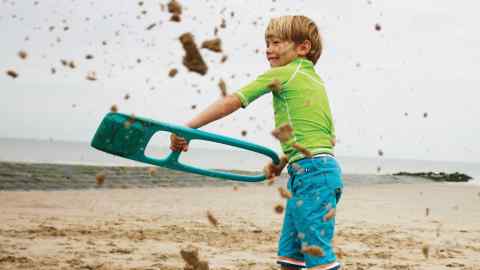