Which blonde will work for you?

From Blondie’s peroxide to Billie Eilish’s platinum, every era has its highlights. We ask the colourists to share their winning streaks

We’ll send you a myFT Daily Digest email rounding up the latest Beauty news every morning.

In 1997, colourist Nicola Clarke – then a young assistant to hairdresser Sam McKnight – was sent to the home of a 23-year-old Kate Moss to “sort out” her hair for London Fashion Week. “She had a huge white stripe down the front when I met her – it was very Geri Halliwell,” she laughs. Clarke took Moss’s hair to a softer, more natural colour. “A quarter of a century later and I still get at least two clients a week showing me images of Kate and asking for her hair,” says Clarke, who has been responsible for the model’s blonde look ever since.

Moss is now 48 and after numerous incarnations of the colour – call it the seven ages of blonde, from bombshell to beachy – has returned to the soft tones she had in her early career. “These days I try to emulate what the sun would do naturally by putting a halo of light around Kate’s face,” says Clarke. “My aim is to create something gentle and soft by using a really low-volume peroxide with bleach. For the rest of her hair I use a high-volume peroxide mixed with a high-lift tint in foils.” The result is a natural, childlike blonde.

More than any other hair colour, blonde comes with a narrative, from Marilyn Monroe’s platinum sex-symbol curls (she swore by Johnson’s Baby Powder as a dry shampoo, applying it every two days to keep her hair looking fresh) to Joni Mitchell and her sun-kissed, poker-straight mane. Blonde remains the UK’s number-one dyed hair colour – only around two per cent of the world’s population has naturally blonde hair. Compared to the one-note chic of brunette, blonde can take you places. Punky, fresh, innocent, glamour puss: take your pick and the version of woman you want to be can be mixed up in a bowl, applied and realised in 30 minutes flat.

I grew up in the late ’70s, looking at images of Jerry Hall in French Vogue. Her long legs, long body – long everything – were something to behold. But it was her hair that really entranced me – side-parted, thick and golden as a cornfield, it waved all the way down her long arms. That hair, and the way she wore it with such confidence and sophistication, was everything I wanted to be. Bold and centre stage. I took my long blonde hair to clubs, waved just like Hall’s, then moved to LA in my early 20s and cut the lot off, dyed it platinum and tried to look like Debbie Harry.

Every era seems to have its own interpretation of blonde. Harry redefined Monroe’s platinum look for the punk era. This time, no baby powder – it was the dark, grown-out root that made it cool. Then followed the ’90s, a divided decade embracing both grunge and glamour. Model Emma Balfour defined the former; her David Bowie-tribute look of a platinum fringe – offsetting a mousy, choppy cut – epitomised the fashion moment. For the more mainstream fashion follower there was the Bardot-esque golden blonde Claudia Schiffer, inspiring three Barbie dolls to be created in her image. The blonde of the 2000s had to be Meg Ryan and her shaggy balayage beach-blonde. Created by hair stylist Sally Hershberger, it inspired a decade of demented tonging to create the perfect tousled do.

The die-hard blonde now looks too “done” for post-pandemic tastes. Josh Wood, the colourist responsible for Elle Macpherson’s beachy honey tones, says: “There is an elitism about blonde, but high-maintenance almost seems out of step with the times now.” Full blonde can be unflattering also on older skin. “As my clients get older the warmer, buttery, honeyed tones seem softer than icy colours, and these days I add a darker root shade rather than cover it up.”

“I’m seeing the grown-out head of hair become a trend,” says Jenna Perry, New York’s go-to colourist, who is responsible for some of the best blondes on the planet, including Dua Lipa’s recent platinum-with-dark-roots shade (yes, “grown out” can also be “dyed in”). “I’m even seeing some of my traditionally blonde clients – Karlie Kloss – trying more brunette shades.”

Famous blondes approaching their 50s, like Gwyneth Paltrow and Chloë Sevigny, are allowing a smattering of grey to come through alongside their natural root colour. “The blonde comes in as strategically bleached lights framing the jawbone or the tips of the hair,” says Perry. “It is also easier to maintain,” she adds, “as it only needs to be retouched every three months instead of every six weeks.”

I have spent the past few years as a platinum blonde with smudged dark roots. I loved it but found it a full-time job to maintain. My hair wants to be yellow, a colour that makes me feel brassy. (Shannon Gallacher, who works with Nicola Clarke at John Frieda’s London salon, fought a champion battle to achieve the cool tone I wanted. At home I would dutifully follow up with icy toners, but it was hard work.) Still, I didn’t want to grow older and be like so many of the tasteful biscuit-blondes I see. I want my blonde to be more playful, something for me. 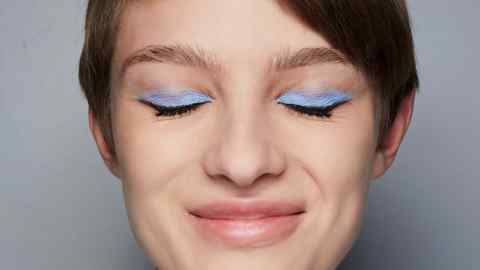 So, in recent months I have been trying a more lo-fi blonde – and just left it well alone. For the first time since I was 10, I have seen my own natural colour. It’s mousy, yes, but the colour is kinder on my skin. I chopped out the residual white blonde and spent some time with myself. Today there is grey throughout my scalp – one of the perks of a mousy colouring is that the grey is easily absorbed.

Old habits die hard and it wasn’t long before I was back sitting in Nicola Clarke’s chair. “Can you make it, you know, like Kate Moss?” I murmured. “Hmm,” she replied laughing. The result is what I would call an “under colour”. I am still mostly all my own mouse, which I have grown very fond of, but the underneath is bleached and – just like Kate – I have a halo of light framing my face. Who could wish to grow older more gracefully than that?