Inside Seed Library, a Bond villain’s lair of a bar

Next week, One Hundred Shoreditch opens on the site of what was once London’s Ace Hotel. It’s hard to know what scenesters will make of this restaurant and hotel complex from Lore Group – but I think it’s pretty safe to say that they’ll be impressed by its bar. Seed Library is the work of Mr Lyan, the multi-award-winning British bartender also known as Ryan Chetiyawardana.

For more than a decade, 37-year-old Chetiyawardana has been a leading light of the world’s cocktail scene, creating bars that delight, amuse and provoke in equal measure. From the avant-garde White Lyan in Hoxton – a forerunner of the zero-waste movement that eschewed all perishables, including ice – to the high glamour of Dandelyan at the Thameside Mondrian Hotel, he’s married intellectual ideas and delicious drinks with an unwavering sense of fun. It’s made this polymath a darling of the creative world – collaborators have included the Wu-Tang Clan, Tate Modern, Kelly Wearstler and Gareth Pugh; Björk and Beyoncé are among his fans. If you happen to be going to SXSW next month, you’ll find him speaking there.

These days, Mr Lyan is an international brand, with bars in Washington DC and Amsterdam. Now the Seed Library sees him return to his bartending roots in east London. And there is a desire with this loungey basement bar, says Chetiyawardana, to evoke something of the comfort of home. “We wanted to make it feel like a sanctuary, a retreat,” he says, “like those villains’ lairs in old Bond films that are meant to be imposing but are also kind of cosy!” The palette is loosely 1970s – warm tones of putty, stone and toffee punctuated by pops of burnt orange and vibrant red. Mushroom-shaped resin table lamps emit soothing pools of light; low-slung chairs and leatherette banquettes invite you to sprawl.

Instead of offering a lengthy concept menu that changes twice a year ­– the way Mr Lyan bars have tended to in the past – Seed Library serves just nine classics-with-a-twist and changes them almost weekly (prices around £9 to £12). There’s a Sansho Leaf Martini as lush as a rain-drenched garden; a Thai Basil Vodka Lime Soda with a subtle hint of anise; a twist on a Penicillin (a sour based on peaty Scotch) made with smoky mezcal and fiery galangal; and an Apple Bellini sweetened with apple purée and scented with raspberry leaf.

Chetiyawardana was a trailblazer for non-alc mixology – and many of these cocktails have alcohol-free iterations too. The Coriander Seed “Gimlet” is extraordinarily good.

I’m struck by how many vodka classics there are on the menu – there’s even a riff on a fruity French Martini made with black elderflower. Will 2022 be the year the much-maligned neutral spirit makes a comeback? “Too often vodka is just used as a fortifier, because people want to get lit,” says Chetiyawardana. “But the best vodkas have real texture and flavour to them. When you use a really good vodka, you don’t need to be ironic about it.” He tends to use rye and potato vodkas – Belvedere Heritage (rye) and Luksusowa (potato) are two of his favourites.

Tucked away in a corner of Seed Library is one of the loveliest details: a wood-panelled, vinyl-lined DJ booth modelled on a Tokyo listening bar. The plan is for it to play host to regular guest DJs; the house playlist revolves around 1960s and ’70s rock and soul, Afrobeat and Ethiopian jazz. “Vinyl is definitely encouraged here – with all its pops and crackles,” says Chetiyawardana. “This bar is about a return to a more analogue way of doing things.”

HTSI
Around the world in 5,000 bottles 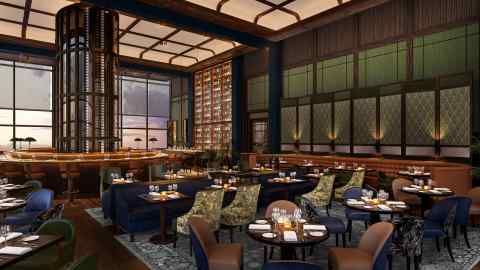 Get alerts on Cocktails & Drinks when a new story is published