Transport your taste buds with these travel-inspired cookbooks

Part recipe books, part armchair-travel, this season’s cookbooks offer a mezze of delicious foods. Savour recipes and stories that will transport you – from the citrus groves of the eastern Mediterranean to the saltwater marshes on America’s coastal south.

Prawn On The Lawn: Fish and Seafood to Share

Following the success of their Padstow pop-up, Prawn On The Farm, Rick and Katie Toogood of London fishmongers and restaurant Prawn On The Lawn, are releasing a new edition of their cookbook Fish and Seafood to Share. Featuring dishes from the restaurant such as crab-stuffed courgette flowers and shellfish stew with parsley oil, alongside photographs of barbecues on the beach, the seaside-inspired culinary tome also offers insight on sustainably sourcing fish. By Rick and Katie Toogood (Pavilion, £18.99)

Grand Dishes: Recipes and Stories from Grandmothers of the World

Inspired by journalist Anastasia Miari’s Greek grandmother, who cooked Corfiot dishes such as cinnamon stifado stew over a fire she built herself, Grand Dishes is an anthology of treasured recipes from 70 grandmothers all over the world. Included are family recipes of feted chefs and food writers such as Anna Jones and Meera Sodha, each accompanied by snapshots and the stories behind each dish. Bookmark Baba Maral’s Azerbaijani stuffed vine leaves and Nan Jean’s Jamaican vegan callaloo and ackee with steamed pumpkin and roots. By Anastasia Miari and Iska Lupton (Unbound, £25)

Ripe Figs: Recipes and Stories from the Eastern Mediterranean

A love letter to “sun-drenched islands filled with olive groves and citrus trees”, Ripe Figs travels through Greece, Turkey and Cyprus tracing the recipes and communities that have moved through and settled in the region over time. For example, a meal with a Syrian doctor-turned-restaurateur on the Greek island of Lesvos was an early incarnation of Khan’s pomegranate and sumac chicken, while the candied pumpkin with tahini and date syrup was inspired by her time in Istanbul. Each new dish is as delectable as the next in this richly illustrated exploration of how migrant and refugee communities have shaped Eastern Mediterranean cuisine. By Yasmin Khan (Bloomsbury, £26)

A Gullah Geechee phrase meaning “bless and eat”, Bress ‘n’ Nyam chronicles chef Matthew Raiford’s return to the family farm his great-great-great grandfather purchased in Georgia in 1874, to pay homage to the cuisine of the Gullah people, descendants of once-enslaved Africans on America’s coastal south. More than 100 heirloom recipes – such as Raiford’s great-grandmother’s buttermilk griddle cakes with muscadine jelly, and his great-grandfather’s fried fish and grits – are combined with evocative photographs of the area’s saltwater marshes and ancient, moss-covered oaks. By Matthew Raiford (Countryman Press, $30)

The Food of Oaxaca: Recipes and Stories from Mexico’s Culinary Capital

In the highlands of southern Mexico, Oaxaca is known for its craft traditions and vibrant cuisine. Now, chef Alejandro Ruiz of the renowned Casa Oaxaca takes readers on a journey across Mexico’s culinary capital through 50 recipes, from classics such as tamales and moles to his own creations, including duck tacos with Coloradito and Oaxacan chocolate mousse. Essays on kitchen tools and traditions, recommendations on where to eat, and tantalising photographs all tantalise the taste buds further still. By Alejandro Ruiz and Carla Altesor (Knopf, $35)

Colombiana: a Rediscovery of Recipes and Rituals from the Soul of Colombia

Drawing on the culinary traditions of her native Colombia, this new book from award-winning New York-based recipe developer and food stylist Mariana Velásquez is a journey across the country in 100 recipes. From classics such as arepas and empanadas to modern interpretations of spicy papaya and charred leek gazpacho, these recipes are interspersed with sumptuous photography, short profiles of Colombia’s female food heroes, and tips for entertaining – from tablescaping to playlists. By Mariana Velásquez (HarperCollins Publishers, $32.50)

How To Spend It
10 new UK restaurants to book now 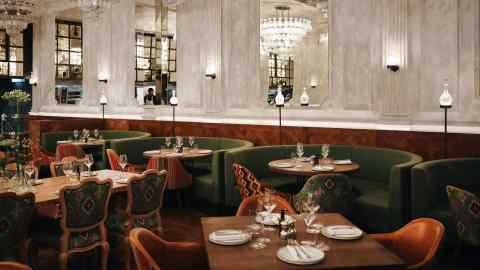