The parks, pastries and beautifully designed stores that keep the florist endlessly in love with her adopted home

Berlin is such an amazing base. When I first moved here from Sydney in 2012, the city allowed you to live quite cheaply while setting yourself up. I started Mary Lennox – my floristry studio, named after the protagonist of Frances Hodgson Burnett’s The Secret Garden – and in 2014 got my first big commission, from Mercedes-Benz. We built a greenhouse out of recycled windows in the lobby of its headquarters on Mühlenstrasse – and this was followed by the opening of our shop The Store X at Soho House Berlin.

Today, I live and work in Schöneberg. My home is close to Charlottenburg and near to Viktoria-Luise-Platz – a small, peaceful park with a fountain, surrounded by beautiful Altbau buildings, the classic apartment blocks built between the end of the 19th century and the 1930s. But I work close to Kreuzberg, which has a young feeling about it, so I have the best of everything between them. I don’t enjoy Berlin for the usual things that people love about the city – I don’t go to nightclubs or bars, for example – so I’ve had to find my own stuff here.

The city’s green spaces are key, from manicured parks to the wilder options. I love the Tiergarten. I love Treptower Park and its Soviet War Memorial. The city comes to life in spring, when the streets are lined with cherry blossom. In summer it becomes overgrown and corners get overtaken by the greenery. I love how nature interacts with the city.

I prefer to walk to work if I have time, taking in some green spaces but also walking along Potsdamer Strasse, which is all art galleries and sex workers. On the way, I’ll stop at Rocket + Basil, a Persian/Australian café run by my boyfriend’s sisters, where I might buy lunch for my team. I usually have one of their delicious salads or sandwiches, full of herbs and bright flavours.

My studio is at a place called Am Lokdepot, a development right by the train tracks. It’s a big red building – quite iconic – and next to my studio there’s a restaurant called Lok6, where the food is seasonal and elegant; the chef, Julia, with whom I collaborate on projects, serves inspired creations such as baked apple with cranberry, pecans and vanilla custard.

The city comes to life in spring, when the streets are lined with cherry blossom

And I love Kin Dee, just outside of Schöneberg. The chef, Dalad, cooks modern Thai food with a seasonal and local approach. The flavours are delicate and sophisticated. It’s part of a great hospitality group, which also owns Grill Royal, and this spring they are opening a hotel in Mitte, the Château Royal, which I’m quite excited about. It is located in a beautiful building right off Unter den Linden, and I think it will be the place to stay.

If I’m venturing further afield, I like Café Frieda in Prenzlauer Berg. It’s very sweet, with marble tables outside. They have fabulous pastries, such as hand-laminated rye and buckwheat croissants. You can also have a slow lunch: salads, or a whole crab, all with a little bit of Asian or French-bistro inspiration.

Nearby is MDC Cosmetic, a beautifully designed shop that has lovely perfumes and the whole Buly 1803 range. It’s a real pleasure to shop there and have a facial in one of their treatment rooms. Ryoko Senses Salon is another favourite. She makes all her own cosmetics and oils and does amazing massage. It’s very peaceful. But the best

How To Spend It In...
Jamie Dornan’s guide to Belfast 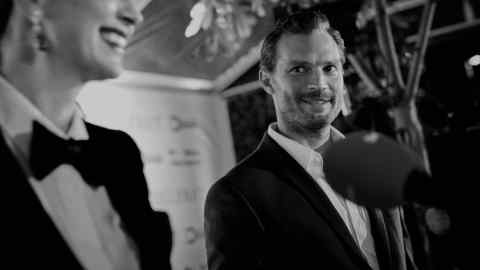 store in Berlin, in my opinion, is Andreas Murkudis: it’s gorgeous, with a precise selection of clothes and lifestyle pieces. It fits my style – modern and simple knits, dresses and accessories, from brands I love such as Loewe and The Row.

If I’ve got time, I love to go to galleries. König Galerie shows contemporary art in St Agnes, a Brutalist building in Kreuzberg that was once a church. I also saw the Calder exhibition at the reopened Neue Nationalgalerie. It’s a Mies van der Rohe building and the renovation is exceptional.

Some of Berlin’s cinemas are very special, like the Kino International, which is a really fabulous building. Going to the Philharmonia is another thing I like to do. And then there’s the Botanical Garden at Dahlem. In spring, the display of magnolia and blossom is as spectacular as the glasshouses.

I’m about to have a baby, so this year is going to be interesting! I’ve been feeling the pull back to Sydney. I’m pursuing the dream of the half and half: two summers, one in Germany, one in Australia. It’s a nice pipe dream.