Magnus Renfrew on opening an art fair in Taipei

If anyone is capable of setting up a new international art fair in Taiwan, it is Magnus Renfrew. Founder and director of Taipei Dangdai, as the fair is known, Renfrew, 43, has deep experience in Asia.

He first came to Asia in 2006 when he got a job at Pearl Lam’s prestigious Shanghai gallery, and he has been based in Hong Kong since 2007. The following year saw him become the first director of the fair known as Art HK. So successful was that venture that in 2011 Swiss exhibitions group MCH bought a 60 per cent stake and incorporated it into its glossy Art Basel fair portfolio.

Originally from Cambridge, England, Renfrew is the son of two archeologists. Today, with his wife and three small children, he describes Hong Kong as “home”. Asia appeals, he explains, because it taught him that “the western aesthetic is not the only way of looking at the world.”

After the Swiss takeover of Art HK, Renfrew remained with Art Basel in Hong Kong for three years before a stint at Bonham’s Asian office. And he developed his dream of setting up an art fair in the neighbouring island of Taiwan.

“When I was setting up Art HK and we were looking at different constituencies around the region, it was clear that Taiwan was one of the most active [players] in the international art market,” he tells me as we chat over bagels and coffee in a Miami Beach café during the US iteration of Art Basel’s global fair calendar.

“Taiwanese collectors have been engaged in buying [contemporary art] for 30-plus years,” continues Renfrew. His awareness of their stature in the region was “massively reinforced” during his time at the helm of the Hong Kong fair. “I spent a lot of time in Taiwan primarily because the galleries were saying that the participation of the Taiwanese collectors at the [Hong Kong fairs] was instrumental to their success. They were a very important constituency to be engaged with.”

As he got to know the Taiwan scene, Renfrew was astounded by “how many buyers we had never come across”. Apart from their customary reticence, Taiwanese collectors’ preference for buying not from dealers but at auction — where, as Renfrew puts it, they felt confident that “value was what it should be” — ensured a degree of anonymity.

Sotheby’s confirms that Taiwan is a force to be reckoned with in the Asian market, at its Hong Kong sales. “Sotheby’s takes Taiwanese collectors seriously,” a Sotheby’s Asia spokesperson writes, adding that “Taiwan has long been a market as integral as Hong Kong and mainland China.”

Furthermore, Taiwan’s share is growing rapidly. “The number of Taiwanese participants in Sotheby’s Asia sales has grown by over 60 per cent in the past decade (2008-17),” continues the spokesperson, “The value of western contemporary art purchased by Taiwanese collectors across our global salerooms saw an almost fourfold increase from 2008 to 2017.”

Asked why Taiwanese buyers are exhibiting such a desire for contemporary expressions, Renfrew credits the Hong Kong fair, which has “played a role in exposing Taiwanese collectors to top-level contemporary art from all over the world.”

Now his mission is to entice Taiwanese buyers further out of the auction room and into what he describes as the “gallery and art-fair ecosystem”. To boost confidence in that sector, he is determined that dealers’ participation at the fair becomes a “stamp of quality” through a rigorous selection process that ensures “international standards of practice”.

The choice of selectors for this first edition was crucial. The five-strong group of gallerists includes Waling Boers of Boers-Li Gallery, which has spaces in Beijing and New York, Edouard Malingue (Hong Kong/Shanghai) and Patricia Crockett of Sprüth Magers (Berlin/London/Los Angeles). The advisory group, meanwhile, numbers 15 members in total, including major Taipei-based collector Rudy Tseng who sits on Tate’s Asia-Pacific acquisition committee.

Of the 90 galleries on board for this first year of Taipei Dangdai, around 20 have bases in Taiwan. Among the most rooted is Eslite. Founded in 1989, it was the first space dedicated to contemporary and modern Chinese art in Taiwan. Today it represents Chinese stars including Liu Xiaodong and Cai Guo-Qiang, as well as the leading Taiwanese contemporary painter Michael Lin. There is also a solid turnout of inter­national galleries, including Gagosian, David Zwirner, Perrotin and Pace, in the main Galleries section.

There is also a Young Galleries sector for spaces open for eight years or less. Its aim, Renfrew says, is to offer a showcase for younger galleries with “solid programmes” that include established artists. This contrasts with other fairs, which regularly demand that emerging galleries show art that is highly conceptual but not commercial. The result, says Renfrew, is that these vulnerable vitrines “can get stuck for years” in such speciality sectors without moving on to the main section.

To help them climb to the next rung, Taipei Dangdai’s Young Galleries spaces, just four this year, will be subsidised by the fair: their stands will cost US$465 per sq m, as opposed to US$585 per sq m in the main Galleries sector.

Other sectors include Solo, which is devoted to monograph displays, and Salon, which brings together works under US$8,000 in any medium.

Renfrew is clear that his venture poses no competition to its blue-chip counterpart across the water. “We’re not aiming to create a global fair for Asia,” he tells me. “Art Basel does that very effectively. What we’re trying to do is create something that [offers] a positive definition of regionality — being regional on purpose rather than regional as second best. [That means] speaking of and to the region in a way that is respectful of its context.”

Essential to the fair’s realisation is its chief sponsor, the finance house UBS, which as well as possessing a fine corporate art collection is also the main sponsor of Art Basel. Renfrew says that Dennis Chen, country head and head of wealth management at UBS Taiwan, “got it immediately” when he visited him to pitch the idea.

With just a couple of weeks before the fair kicks off, Chen has lost none of his enthusiasm. “We believe Taiwan can become a very good and mature [art] market,” he tells me when I call him in Taipei. “There is a population of 21m, which includes quite a few globally renowned collectors, and many of the new generation are interested [in art].” Chen believes that “there’s enough knowledge [and] interest and there’s definitely enough wealth in Taiwan” to sustain a “global event like Taipei Dangdai”. He believes the trend will continue. “We think it will get bigger and bigger over the next couple of years.”

Yet Taiwan’s political future has once again been called into question since China’s President Xi Jinping announced last month that he has no intention of relinquishing the dream of re-unification. (China has claimed sovereignty over the independently ruled island for 70 years, since the Kuomintang party fled there in 1949.)

Could Xi’s words cast a shadow over the future of long-term ventures such as Taipei Dangdai? Renfrew prefers not to embark on a discussion of nationhood. “It is a widely understood political reality that the status of Taiwan has already been a point of contention for 70 years,” he responds when asked for a comment. “We decided to come to the city of Taipei because the art market is focused on cities and their roles as nexuses of commerce and the exchange of ideas.”

Chen is bolder. “Here we don’t pay much attention to what the communists are saying or planning to do with Taiwan,” he observes. “Because most people here [concentrate on] what they are doing now.

“We believe that China and Taiwan will coexist for a long time and we really don’t see any change in terms of the art scene in Taipei.” 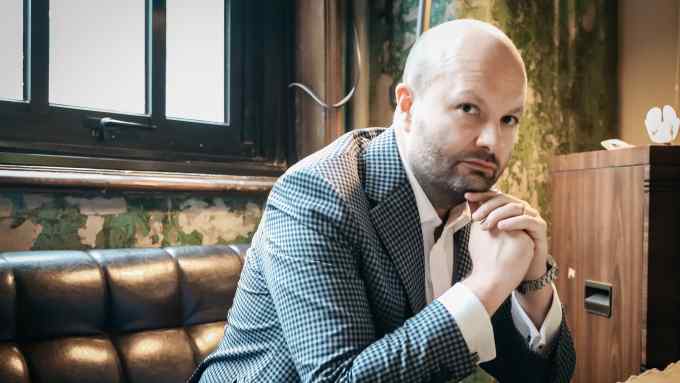