Morgan Stanley, Neuberger Berman, SEI and Matthews Asia have launched or are poised to debut products

Neuberger Berman and a clutch of some of the world’s biggest investors are joining the exchange traded fund industry for the first time, as they seek a foothold in a fast-growing sector that has piled pressure on active managers to justify their fees.

The US investment house is one of a group including Morgan Stanley, SEI and Matthews Asia — together managing $3tn — that have recently launched or signalled their intention to unveil their debut ETFs.

Those companies follow other recent heavyweight converts, such as T Rowe Price, Dimensional Fund Advisors and Federated Hermes, in rushing to roll out ETFs as the products rapidly gain market share at the expense of traditional mutual funds.

The roll-out of such ETFs comes against a backdrop of falling fund fees, in a further sign of the heat faced by active managers as investors capitalise on the proliferation of cheaper, passive products. As a collection of securities tracking an index, an ETF is cheaper for a manager to run than an old-school, hands-on vehicle. Such savings are usually passed on to the end investor, along with superior tax efficiency — in the US at least — boosting the appeal of the funds.

“If you talk about meeting clients where they are, the ETF tool is one that we want to offer alongside our other offerings,” said Noel Archard, global head of ETF and portfolio solutions at AB.

Morgan Stanley, which has $1.4tn in assets under management and was ranked 15th-largest by Willis Towers Watson in its latest report, is the largest fund provider not to offer ETFs.

However, an internal memo written by Dan Simkowitz, head of investment management at the bank, said it had made a “strategic decision” to launch a multi-asset ETF platform offering active and systematic strategies this year.

Morgan Stanley shared the memo, which was circulated in March, but declined to comment for this story.

For AB, the imminent arrival of its first US ETFs will be the culmination of a 12-year journey.

It filed to launch equity ETFs in 2010 and was later granted approval by the Securities and Exchange Commission, but the funds never saw the light of day. While AB was prevaricating, Cathie Wood took the decision to leave in 2014 and set up Ark Invest, which has since launched a suite of ETFs.

AB appears to have rekindled its earlier enthusiasm for the idea of launching ETFs, however, and filed earlier this month to roll out actively managed Ultra Short Income and Tax-Aware Short Duration ETFs.

Archard, who was recruited from State Street Global Advisors in February to head the push, said a “significant event” in AB’s ultimate conversion to ETFs was a SEC ruling in 2019 that simplified and accelerated the approval process for ETFs, including actively managed ones.

“It lowered one of the barriers to entry for many firms that had been thinking about getting into ETFs,” said Archard. “We have a predominantly active footprint. That change in rule prompted another look into whether we should we introduce [active ETFs].”

While the rollout is starting in the US, Archard said AB was “not constraining” itself to any region. Its initial ETFs will have a fully transparent structure, which is essential in markets such as Europe where the portfolio-shielding, semi and non-transparent structures commonplace in the US have yet to be approved.

Kevin Barr, head of the investment management unit at SEI, said the company was “looking for something that is differentiated”. “There really is not much need for more passive ETFs,” he added.

The first fruits of these endeavours are four actively managed factor-based large-cap US equity funds that launched on May 18. SEI has been running these strategies since 2013 in separately managed accounts, which are only available to institutions and wealthy individuals. Pricing is comparable at 15 basis points.

Although SEI is initially focusing on the US market, Barr said it was “actively looking” at the possibility of launching active ETFs in Europe, with the need for full transparency again not a barrier. “We’re comfortable with transparency. It’s not a passive approach where someone is going to be able to arbitrage it away,” he added.

The New York-based group already manages $18bn — out of $460bn in total — in thematic funds and Hari Ramanan, its CIO of global research strategies, cited the “potential for tax efficiency” in expanding this range into ETFs.

Matthews Asia is also going down the transparent active equity route, filing in April for three ETFs focused on emerging markets, Asian innovators and China, which build on its existing mutual funds in these areas.

“While we believe mutual funds will continue to provide benefits to many investors, we have seen a growing interest from financial intermediaries and end-investors who want to take advantage of the benefits active ETFs offer,” said Jonathan Schuman, Matthews Asia’s global head of distribution.

Matthews Asia may have spotted a potential gap in the market, given the relative lack of actively managed Asia or China-focused ETFs at present.

But all the ETF latecomers may have to find their own niches in order to gain a toehold in an industry dominated by BlackRock, Vanguard and State Street, which together still account for over three-quarters of the US market.

When asked how SEI’s offerings could challenge the three market leaders, Barr replied: “[We] don’t see people offering these products. These are differentiated products. This is not a ‘me too’ strategy.” 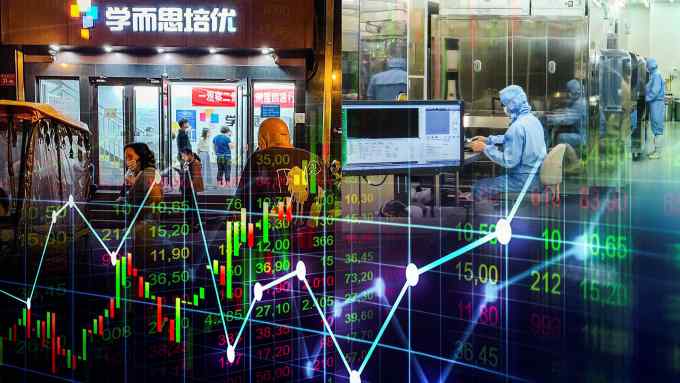