The Antiguan government has established that two yachts moored in the Caribbean island belong to Roman Abramovich, confirming a Financial Times investigation that revealed the vessels appeared to be owned by the sanctions-hit oligarch.

The FT reported this week that boats docked in Antigua’s Falmouth Harbour were owned by a British Virgin Island company with ties to Abramovich, prompting the Caribbean nation to call on the UK government to help confirm whether the oligarch was their ultimate owner.

In a letter to the British High Commissioner to Barbados seen by the FT, Antigua’s minister of foreign affairs Paul Chet Greene said the island’s government had requested information on whether the owner of the BVI company, Wenham Overseas Limited, is on Britain’s sanctions list, in light of “persistent allegations by the Financial Times that the vessels could be owned by Mr Roman Abramovich”.

The letter then confirmed that the British High Commission had provided Antiguan authorities with a letter “from the Financial Investigation Agency of the British Virgin Islands which states the beneficial owner of Wenham Overseas Ltd is Roman Abramovich”.

Abramovich, the owner of Chelsea Football Club, has been placed under sanctions by the UK and the EU, though not by the US, for his allegedly close ties to Russian president Vladimir Putin.

While Antigua said this month that it would enforce all US, EU and UK sanctions on Russian entities and individuals, the island nation initially struggled to verify the ownership of the two boats.

Antigua’s confirmation of Abramovich’s ownership of the yachts raises the prospect that they could be seized. The letter noted that Antigua “will provide full assistance to the Government of the United Kingdom” if it receives a request under the two nations’ Mutual Legal Assistance Treaty.

On Wall StreetBrendan Greeley
A superyacht is a terrible asset 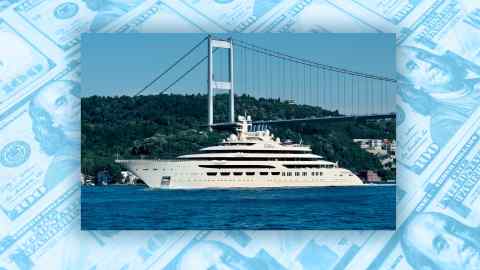 British officials confirmed the government was in contact with the authorities of Antigua and Barbuda and was providing assistance. The UK said it would not comment on discussions.

The yachts in question — called Halo and Garçon — are worth about $38mn and $20mn respectively, according to valuation service VesselsValue.

Halo was built for Australian billionaire James Packer and was originally named EJI after the initials of his three children. However, the casino heir put the yacht up for sale a few months after it was delivered in 2018, reportedly because it was “too small”.

Garçon is a 67-metre explorer vessel designed to carry helicopters and an “armada of water toys”, and was built for Ukrainian billionaire Yuriy Kosiuk, who sold the so-called support yacht last year.

Get alerts on Roman Abramovich when a new story is published