Johnson & Johnson became the first leading pharmaceuticals company to test a single-dose Covid-19 vaccine with the launch this week of a phase 3 trial that will recruit 60,000 participants across three continents.

The company’s decision to pursue a single-dose product may help its trials move faster than rivals that need to give two jabs, even though some other vaccine makers began their large studies in May and July.

Researchers can start measuring efficacy from two weeks after the first dose, rather than waiting an extra four weeks for a participant to receive a second.

Paul Stoffels, chief scientific officer at J&J, said a single dose could be “very important for emergency use”, as it could be rolled out rapidly. The company has pledged to make 1bn doses by the end of 2021. Positive results from a recent smaller trial, due to be published soon, suggested a single dose might be enough to give protection, the company said.

Dr Stoffels added that all the main vaccines were using the Sars-Cov-2 virus’s distinctive spike protein to get the immune system to recognise it — but J&J had taken longer to optimise its “potency”.

We would predict that you could get an answer from the trials that started in July sometime in November or December. It is conceivable it could be earlier

Another potential advantage for J&J is that its vaccine candidate does not need to be kept as cold as some other vaccines, which is important for distribution to developing countries.

The vaccine platform it is using — based on an adenovirus — has a good record, with more than 100,000 people having been vaccinated using the delivery mechanism, Dr Stoffels said.

“It has been used in Zika, HIV, [the respiratory illness] RSV and Ebola,” he said.

J&J has promised to make the vaccine available on a “not-for-profit” basis for the duration of the pandemic. The company has received US government funding as part of Operation Warp Speed to accelerate development, and is working with the federal National Institutes of Health.

Video: Coronavirus: the global race for a vaccine | FT Interview

The NIH has helped to fund the trial with $193m so far — and expects to spend $480m, according to Anthony Fauci, the director of the US National Institute of Allergy and Infectious Diseases.

The adenovirus platform the vaccine was based on came out of “decades of collaboration”, including funding for basic science, he added.

Data from the phase 3 trial will be first examined when it hits 20 Covid-19 infections, in either the vaccinated or placebo group, J&J said, and it would end when it hits 154 participants developing the disease. The trial will be run from sites in the US, in several Latin American countries including Peru and in South Africa.

Coronavirus: free to read
How close is a coronavirus vaccine? 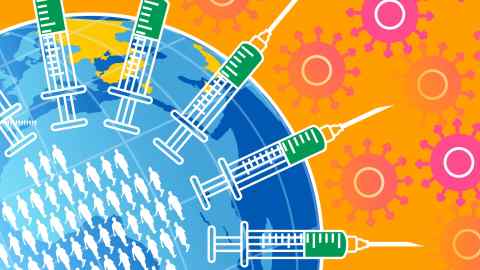 Separately, J&J will work with the UK government to test a two-dose regimen.

Dr Fauci said he expected the J&J vaccine trial to finish a month or two later than the trials that began at the end of July of vaccines developed by Moderna and by Pfizer and its partner BioNTech.

“We would predict that you could get an answer from the trials that started in July sometime in November or December. It is conceivable it could be earlier — it could be October, that is unlikely but not impossible,” he said.

AstraZeneca started its smaller phase 2/3 trial in May and embarked on a trial in the US of 30,000 participants earlier this month — but that has since been paused after an adverse event.

CanSino Biologics, the Chinese biotech, has tested its potential vaccine in a single dose — but is now starting a two-dose trial.