Thirteen authors have made the shortlist of the Financial Times and McKinsey’s 2020 Bracken Bower Prize, awarded to the best business book proposal by an author aged under 35.

Their proposals tackle a variety of themes, from diversity in business, to artificial intelligence, digital currencies, and the future of education.

The prize, first awarded in 2014, has helped a number of younger business writers to bring their ideas from proposal to publication. Judges will select up to three proposals from those shortlisted. The three finalists will be named later this month, when FT.com will also publish extracts from their proposals.

All the shortlisted authors will be invited to take part in a virtual masterclass with representatives from the publishing industry, who will advise them on how to bring business ideas to the bookshelves.

The winner, who will receive £15,000, will be announced on December 1 at the same time as the presentation of the 2020 FT & McKinsey Business Book of the Year Award.

The shortlisted authors for the 2020 Bracken Bower Prize are:

Jonathan Hillman won the 2019 Bracken Bower Prize with his proposal, entitled The Sinolarity, for a book about the battle between the US and China for control over the next generation of technology.

Other winners and finalists have also seen their proposals taken up by publishers. Saadia Zahidi, the inaugural winner of the Bracken Bower Prize, saw Fifty Million Rising, a book based on her winning proposal, make the long list of the 2018 FT/McKinsey book award. Meltdown, by Chris Clearfield and András Tilcsik, who won the Bracken Bower Prize in 2015, received Canada’s National Business Book Award.

The 2017 winner, Mehran Gul, struck deals worth more than $100,000 for a book, provisionally entitled The New Geography of Innovation, based on his proposal.

Ms Zahidi, who is a managing director at the World Economic Forum, is one of four judges of the 2020 prize. The other judges of this year’s award are: Jorma Ollila, former chairman of Royal Dutch Shell and Nokia; Isabel Fernandez-Mateo, professor of strategy and entrepreneurship at London Business School; and literary agent Lorella Belli.

The Bracken Bower Prize is named after Brendan Bracken, former chairman of the FT and Marvin Bower, former managing director of McKinsey. The judges are looking for a proposal that provides a compelling and enjoyable insight into future trends in business, economics, finance or management. 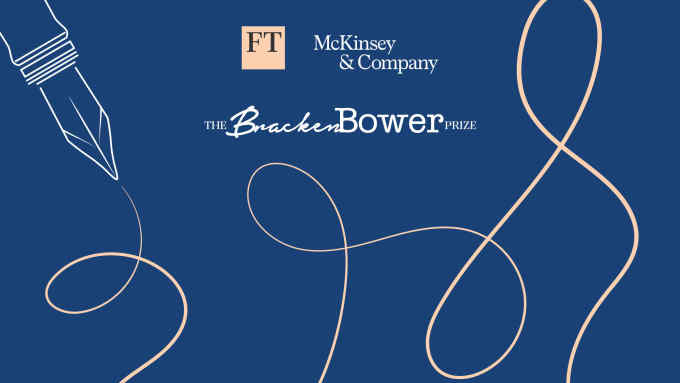