How Picasso’s birthplace became a burgeoning arts hub once again

Earlier this year I found myself sitting in a pick-up truck, watching nervously as my shaven-headed driver launched the elderly vehicle over the brow of a hill and down the side of a ravine that was rather steeper than I was entirely comfortable with.

Reaching the bottom of the valley, and up another steep incline, we arrived at a gated compound – the architect had clearly learned his trade by studying Mad Max films, and seemed to have been aiming at a “fortified jungle hideout” aesthetic. Add howling dogs, subtract mobile signal and, had I not also been in the company of art adviser Fabien Fryns, I might have begun to fear for my safety.

I was in the mountains behind the Spanish beach resort of Estepona, tagging along on a studio visit to one of the rising artists of the Costa del Sol: Juan Miguel Quiñones Garcia (known as Quiñones), a sculptor famous for monumental marble representations of a beloved Spanish ice cream called Dracula. I suppose you could describe it as supersize pietra dura. The work combines humour, technical skill and mastery of materials to achieve an uncanny trompe l’oeil that deceives the eye into believing just for an instant that one is looking at an ice cream. Albeit an ice cream that’s 4m long and weighs four and a half tonnes.

Quiñones (represented internationally by the likes of Ronchini Gallery) uses hardstones to recreate the items with which he grew up: a water pistol in marble, a rocking horse in a stone that looks like wood, cupcakes, snorkelling equipment, surf and skateboards in an array of travertine, marble, alabaster, basalt, banded agate… There is a poignant irony about the way he has crystallised the evanescence of childhood in the most permanent of mediums.

The artist, who acquired his skills restoring sculptures for local antiques dealers, is one of the more picturesque members of what I am calling “The School of Málaga”. Javier Calleja (represented internationally by Almine Rech, among others) is another: a softly spoken, gentle, bearded man whose drawings and paintings of big-eyed cartoon figures with slogans on their clothes have suddenly rocketed in value. The Chinese collector YiXiao Ding recently paid $485,000 to acquire What for his newly opened museum. “At the time, Javier’s artwork was worth $30,000-50,000 in the primary market,” says Ding. “I spent 10 times that because I simply loved the work.” Like Quiñones, Calleja’s introduction to the art world was relatively humble. At one point he supplemented his income as an artist by hanging pictures at CAC Málaga (Centro de Arte Contemporáneo de Málaga), where Quiñones had a show in late 2019 titled Drácula x Drácula.

Over the past 20 years Francisco de la Torre, the city’s longstanding mayor, has pursued a cultural agenda in Málaga and its environs that has achieved similar impact to the Guggenheim in Bilbao. One of his most significant acts was to recruit José María Luna, former director of the Museo del Grabado Español Contemporáneo, to act as a culture czar.

“The Mayor of Málaga called me to revitalise the Fundación Picasso,” says Luna, of the museum founded in the late 1980s in the house where Picasso was born. “His goal was to restore Málaga’s relationship with Picasso, who never forgot his hometown.” In 2003, Málaga pulled off a coup with the opening of its now famous Picasso Museum; the same year had also witnessed the opening of the CAC. In 2011 the widow of Swiss billionaire Baron Hans Heinrich Thyssen-Bornemisza chose a Baroque palace in Málaga to open the Museo Carmen Thyssen Málaga of Spanish 19th-century art. Since then, Málaga has become increasingly associated with some of the world’s leading cultural institutions: 2015 saw the launch of both the Russian Museum, in collaboration with the State Russian Museum in Saint Petersburg, and the Centre Pompidou Málaga.

“The museums have undoubtedly changed the life of the city and play an important role in the flourishing of a new generation of artists,” says Luna, who is also keen to stress the importance of the University of Málaga’s faculty of fine arts and the quality of teaching, a feeling shared by ceramic artist Paloma de la Cruz: “I feel very fortunate to have been born in this city… it has made me the person I am now,” she told an interviewer last year. “This university has trained me, it has seen me grow on a professional and personal level.”

Another artist to watch is Julio Anaya Cabanding, whose star has risen, in part, thanks to the influential Yusto/Giner gallery, a longtime champion of local artists, in nearby Marbella. He replicates Old Masters on cardboard and even directly on the walls of buildings, blending street art with canonical works. Luna recently commissioned Anaya Cabanding to create a site-specific work, his interpretation of an 1854 view of Málaga by Ivan Aivazovsky, for a recent exhibition in Málaga’s Russian Museum. Another of Anaya Cabanding’s works, this time based on View of the Castle of Gaucin by the 19th-century Romantic painter Jenaro Pérez Villaamil, can be appreciated on the external walls of an old village house in Genalguacil, a Pueblo Blanco of around 500 inhabitants an hour or so into the mountains behind Quiñones’s studio.

I was lucky enough to visit the village before fires tore through the surrounding forests this summer. Here, art is impossible to miss: a giant pencil sculpture by Calleja appears to draw a thick curved stripe on the wall of the museum. The whole village is an open-air contemporary art gallery with works to be encountered every few metres. Alejandro Zaia, who founded the fair Art/Marbella in 2015, describes the project as “a real miracle, a little town saved from extinction by the contemporary art programme. Suddenly every artist in Spain would love to receive a call from Genalguacil to show and to spend a couple of weeks there.”

“After 50 years of declining population, since 2018, we have seen an increase of between three to five per cent,” says mayor Miguel Angel Herrara Gutiérrez of the new life in the village. “Museums and culture cannot be just in big cities; every child should have access. It changes their lives.”

“Spain really had a creative moment in the ’80s – then for a long time there was nothing really that exciting happening,” says Fryns, who had a gallery in Marbella, but became so disillusioned that he moved to China in 2004 and opened galleries in Beijing and Los Angeles featuring contemporary Chinese art. He returned during lockdown. “Coming back from Asia after 15 years, I am looking at Spanish art anew – and a resurgence is under way.”

Its reach is broad. This spring, one of Art Dubai’s most remarked upon artists was Angeles Agrela, born in the province of Jaén, near Málaga, and now living in Granada. Her colourful depictions of women are often characterised by exaggerated hairstyles that sometimes obscure the features of the subject, forcing the viewer to concentrate on other aspects of the picture: the Vasarely-like backgrounds and the clothing are without exception beautifully rendered.

As well as being beautiful, her works are a commentary on female portraiture in the canon of European art history. Fryns, who is preparing a show in Dubai, is pushing at an open door, with a group show around the School of Málaga planned for next year. 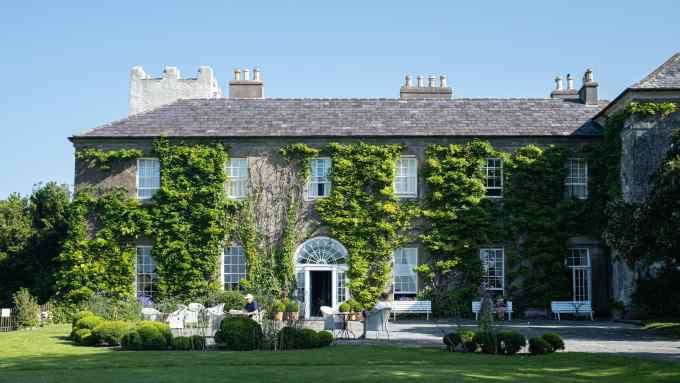