What happens when a supermodel meets Sunspel?

Edie Campbell is explaining the inspiration behind the chocolate-brown houndstooth suit she recently co-designed for the British heritage label Sunspel. “You know the really garish suits that Danny DeVito wears in Matilda? I kind of wanted to do that but make it a little bit more refined,” she says. “Somewhere between that and King Edward VIII.”

It’s not often someone lists the nefarious car salesman Harry Wormwood as one of their style icons. Then again, Campbell – dressed in a green Arket vest and a pair of “ancient” slouchy Comme des Garçons trousers that she stole from her dad – is no ordinary model. Propelled to fame after starring in a Burberry campaign alongside Kate Moss in 2006, the 32-year-old – who has an art history degree from the Courtauld Institute of Art – has appeared on numerous Vogue covers, been named model of the year at the Fashion Awards and walked for fashion houses such as Dior, Saint Laurent and – perhaps most notably – Marc Jacobs’ final show for Louis Vuitton, where she strode down the runway wearing nothing but a feathery headdress, a crystal-embellished G-string and some black body paint. “I was absolutely trollied when I agreed to it,” she recalls. “But I remember thinking I can’t say no to this. If I say no, I am just pathetic.”

It’s this irreverent British humour, combined with her elegant, androgynous style, that she is now channelling into a capsule womenswear collection for Sunspel, a brand she first collaborated with in 2015. “We wanted to introduce Sunspel to a new audience, but also see where Edie would take it within our ethos,” says Sunspel creative director David Telfer. “Each piece has a unique twist to it, so there’s a nice blend of Edie’s style mixed with our values of quality and timeless design.”

Comprising elevated essentials that draw on menswear, the seven-piece collection is a “modular uniform”, says Campbell, that includes Harris tweed coats, houndstooth jackets and button-down shirts: “I like to feel comfortable,” she says of the collection. “I like a simple shape.” Prices range from £195 to £850, and the designs are informed by Campbell’s own approach to dressing. “Simple and reliably nice clothes so that [getting dressed] can be a slightly thoughtless process,” she continues. “I really like getting dressed up but then I like to return to more of a uniform that’s comfortable and functional. It’s important for me in my actual day-to-day life to not feel constricted by my clothes. Life has to work.”

In addition to the classics, there is a slinky lime-green mesh knit with a deep-V neckline – “so it’s not all just slightly prudish daywear”, says Campbell – which was inspired by a lace piece from Sunspel’s archive. But all the pieces have been designed with a sense of longevity, so that they will transcend seasons and modish trends. “A lot of consideration went into how they would wash and how they were going to work functionally,” says Campbell. “And thinking about whether the knits would snag on rings, or become threadbare so you’re not suddenly standing there naked because it’s all unravelled.”

Campbell pulled inspiration from an eclectic mix of cultural references, ranging from Nick Cave to Jarvis Cocker, as well as talking to her friends. “[Edie] loves researching and her inspiration comes from a broad and amusing litany of sources,” says artist Christabel MacGreevy, who has known Campbell since they were five years old. “Her humour is prevalent, even if just through that British desire to have everything imperfect, and there is always a streak of subversion – a little twist or a surprise.”

Campbell is in fact the third generation of her family to work in the industry. Her mother, the prize-winning architect Sophie Hicks, is a former fashion editor at Tatler and British Vogue and stylist to Azzedine Alaïa, while her grandmother, Joan Hicks, was a successful model in the ’50s, working with photographers such as Norman Parkinson and David Bailey – though Campbell insists they aren’t an especially “fashiony” family. “My grandma was quite glam and would have a full face of make-up on every day, but my mum is the total opposite. She’s of the ‘wash your face with soap and get on with it’ school of thought,” she says. “Though there were a lot of conversations about design and aesthetics growing up, and I was always being encouraged to observe and notice things.”

HTSI
‘Sunspel survived the war; we will survive this’ 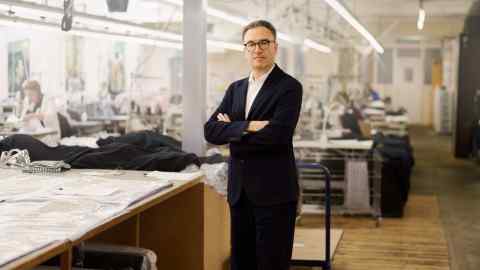 These days Campbell – who is also an accomplished equestrian, having competed semi-professionally since she was a teenager – lives at more of a remove from the frenetic pace of fashion. She recently decamped to rural Northamptonshire to be nearer to her five horses Ed, Bruno, Del, Luke and Dolly. “It’s literally a retirement home,” she jokes about the lakeside property designed by her mother. “It’s a bungalow so it’s very wheelchair-friendly.” When she is not shooting fashion campaigns or training for dressage arenas and showjumping events, she enjoys pottering about in the garden and is learning how to care for plants with the help of various gardeners’ forums. “I think everyone in my community is quite amused by this model who’s turned up and is like, ‘Has anyone got a hedge cutter?’” she says. “But people in the countryside are really friendly and everyone says hello. It’s a nice change.”

She feels at home in the pastoral surrounds of the west Midlands. “I’m living this kind of British countryside fantasy,” she laughs. “But I love it. It’s so relaxing. In my 20s I was travelling every day, so it’s quite nice now to be more rooted,” she adds. “My resting heart rate is lower; things are kind of flat-lining in a nice way.”