Accept cookies
Manage cookies
The click-fit club: tech to take your health to the next level
See all 10 stories
HTSI  Gadgets

Supercharge your wrist – and get fit – with this tech kit

Six smartwatches and bands to work out with

Fitbit has long been the pacemaker in gadgetry to track personal health. With this, released early in 2020, it was one of the first off the blocks with tech to measure blood oxygenation – a key measure of health, which is why anyone in hospital regularly has an oximeter clamped to their fingertip. Blood oximeters measure oxygen levels by shining red and infrared light through the skin. The same principle applies in the latest Fitbit products, using the wrist. Fitbit takes readings through the night. So when you wake up, you see your oxygen-level variation. Too many orange peaks, indicating times when your level has dipped below ideal, can indicate potentially dangerous sleep apnoea and other breathing problems. £170, fitbit.com

From French gadgeteer Withings comes a smartwatch for those seriously, and pretty much solely, interested in health and fitness tracking. It does give call, text and calendar alerts on its little integrated screen, but eschews such other frivolous functions as GPS, music, making payments and being able to download apps. Instead, you get pretty much all the medical functions you’d find on the latest Apple Watch – from ECG, blood oxygen and heart-rate monitoring to tracking your activity, workouts and sleep parameters. It’s also a thing of aesthetic pleasure: unlike the Apple Watch that, with its oblong design, is starting to look a teensy bit 2015, the Withings ScanWatch is an elegant, almost traditional-looking piece of wristwear with real, mechanical hands. It also has a 30-day battery life, which is a huge plus. From £209, withings.com

The latest, sixth iteration of the Apple Watch has some satisfying upgrades. Its screen is brighter than its predecessor’s and it charges quicker. Apple also claims the new S6 chip improves performance by around 20 per cent.

But the headline is a potentially life-saving feature to add to the 5’s ability to take an ECG and warn of irregular heart rhythm. This Apple Watch can also measure your blood oxygen levels. It’s not the first personal device able to do this, but it’s a significant step for Apple.

It can’t yet be said that the watch will help control asthma, or gauge the risk of heart failure, or warn of the onset of respiratory illnesses such as Covid-19 – but Apple is working with three medical organisations to trial its possible future efficacy. Meanwhile, tracking O2 levels is another useful metric for assessing improvement in your fitness.

I was curious to know how often the watch checks. Apple says “periodically” when you’re still for a while – I’ve found it is taking an impressive 8-10 measurements overnight. Nb: it’s best to give the watch a 30-minute charge before shut-eye. From £379, apple.com

Tag’s third-generation smartwatch looks and feels like a real analogue timepiece and, with a 45mm case, comes in any colour you like so long as it’s stainless steel or black titanium. Precision sports features are its USP. It is powered by Google software, and custom-built apps provide sports tracking using the watch’s GPS, accelerometer and heart-rate sensors to make it your macho companion for running, cycling, walking and golf, with maps of more than 39,000 courses worldwide. Other specially tailored sports apps are promised down the line.

The metrics it collects run from distance, duration, pace and speed to calories burned. The controls are not just wishy-washy on-screen touches and swipes, but big, precise mechanical buttons – proper chronograph pushers at the two o’clock and four o’clock positions – plus a highly ergonomic rubberised crown. The Tag also has Google Assistant aboard. From £1,495, tagheuer.com

I love the look of Tag’s smartwatch, the Tag Heuer Connected (see above), but, for me, the most exciting and attractive smartwatch now available is the Montblanc Summit 2+. It looks sumptuous and has at least one function to make Apple Watch owners envious: stress tracking. Montblanc was hesitant when I asked how it assesses stress, but it seems to be based on heart rate variability – and I certainly found it uncannily accurate in testing. It’s also both Android- and iOS-compatible. £1,040, montblanc.com

Whoop launched its first band in 2015 to help elite athletes track their progress, predict future performance and, unusually, advise them when not to train to avoid overdoing it. It has no display, GPS or vibrating alarms and it won’t answer your phone. It should be worn all the time, monitoring principally heart-rate variability (HRV), a measure of the variation in time between each heartbeat, only picked up normally by a full ECG. HRV, said to be an important measure of fitness, performance and recovery, has only recently come to prominence.

Whoop was soon adopted by a number of US sportspeople, notably LeBron James, the NBA player, and Justin Thomas, the golfer.

Now in its third incarnation, the Whoop is targeting slightly less elite sportspeople like you and me. It’s recharged in-situ with a click-on battery pack, a sort of mid-air refuelling. The extra power it has at its disposal from the lack of display means it can measure your vitals hundreds of times a second, unlike a normal band, which checks you out intermittently. If you want an instant snapshot of your heart rate, it will oblige, but HRV is the key metric for the Whoop Strap 3.0.

What I found most useful was the advice on sleep and recovery. Whereas an Apple Watch or Fitbit will simply tell you to be in bed by a certain time, by studying the relationship between your past bedtimes and physical performance you can effectively bargain with Whoop – if I stay up until 3am, when can I get back to my normal exercise level and not feel terrible? Really useful and interesting technology.

Whoop, from €25 per month. The Whoop Strap 3.0 is supplied as part of membership, whoop.com

READ MOREThe click-fit club: tech to take your health to the next level
‘Faster, further, funner’: ebikes zoom ahead 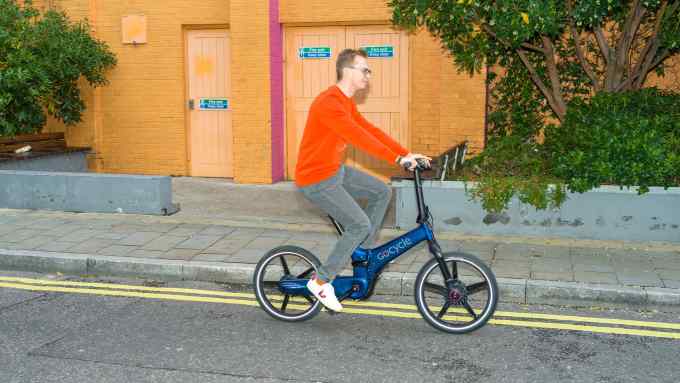